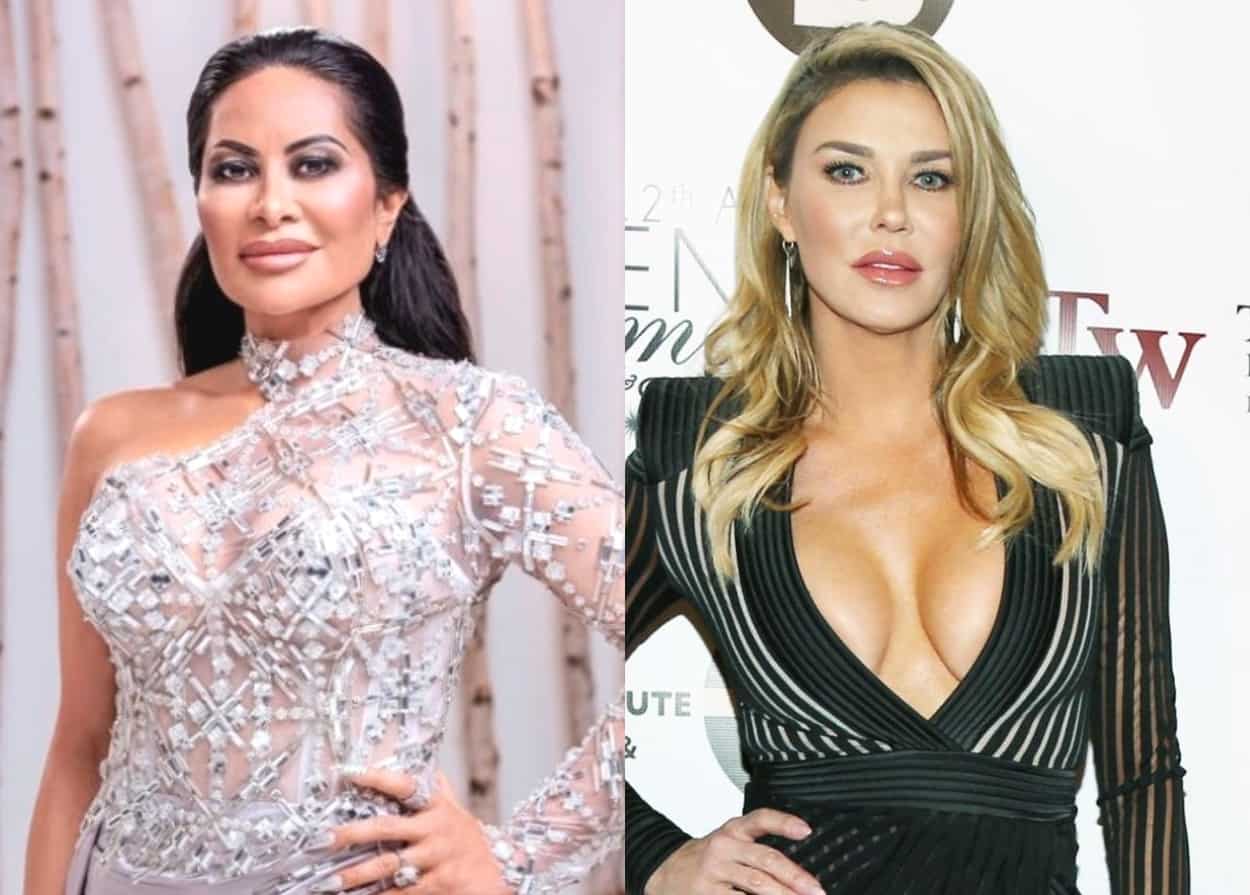 Jen Shah lashes out at Brandi Glanville and has a few new names for The Real Housewives of Beverly Hills alum as Heather Gay reveals some of Jen’s behavior has left her feeling queasy.

After the December 2 episode of The Real Housewives of Salt Lake City aired, Brandi took to Twitter to shade Jen and her co-star, Lisa Barlow. Jen wasted no time clapping back.

The two fakest bitches on #RHSLC are Diet Coke bitch & tons of glam (hubby picked her up in a 1996 land cruiser) bitch-the rest I’m not mad at they seem authentic Love it or hate it???????????? that’s my opinion.

Although Brandi didn’t mention names, it was obvious to fans who she was referring to. It was also obvious to Jen because she re-posted an Instagram Story from That Bravo Life, but she added stickers of herself, Lisa, and a snippy Chihuahua.

“I know Brandi, the biggest trainwreck and woman with the least class to ever be allowed on housewives, is not coming for my queens!” That Bravo Life wrote, referring to Brandi’s tweets. 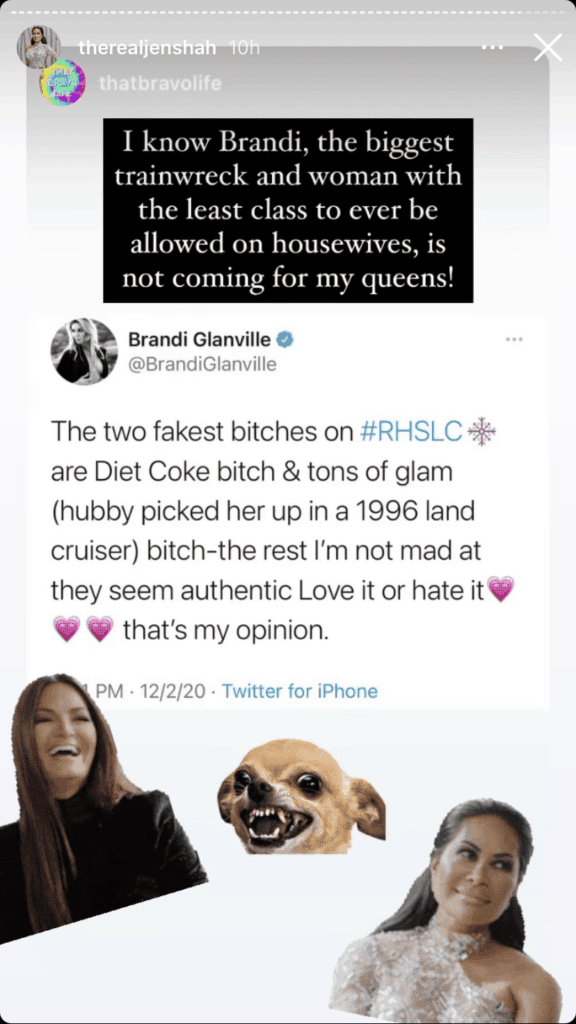 The back and forth appeared to die down until Jen joined an Instagram Live on December 5 hosted by That Bravo Life, which was captured and shared by iRealHousewives. Jen actually brought props to the Live and used a bullhorn siren to first describe her thoughts on Brandi’s rude comments before ultimately going on a profanity-laced rant.

“I didn’t even respond to it – it’s like so ridiculous,” Jen quipped. “Like honestly, it’s so stupid. Bye bi*ch! You ain’t on the mother f**king housewives of nobody so shut the f*ck up, sit the f*ck down, drink some water, [and] go back to wherever you came from! Bye!”

The marketing company CEO then invented a new nickname for the RHOBH alum by calling her “Booted Beverly Hills Brandi” before claiming she must have “came from the slums of Rodeo [Drive].”

Then, possibly referring to the drama that went down between Brandi and Denise Richards on season 10 of RHOBH, and the fact that Brandi has revealed she’s bisexual, the RHOSLC star made Brandi an extremely offensive offer.

Meanwhile, Jen’s co-star, Heather, revealed in a recent interview that some of her friend’s behavior and comments have caused her to feel “sick.” On the December 2 episode, Jen called Mary Cosby a “Grandfather M-Effer” at the prohibition party, and that did not sit well with Heather.

“It happened and it was just — It made me sick,” she told Hollywood Life.

The Beauty Lab + Laser Med Spa owner went on to add, “It made me sad because someone says that and it’s not untrue, but it’s also unkind.”

Jen and Heather appear to have a very close relationship so far on the show, but when Heather was asked to pick a side in the Jen and Mary feud, the mother-of-three didn’t have a second thought.

“I am always drawn to the underdog and I want to discover more about Mary and I want her to feel safe to express who she is,” Heather explained.  “And so I feel like Jen feels very safe in expressing who she is and she knows that I love her and I am loyal to her, but you’ll see. It starts to get harder for me to walk that line because it is difficult in a group of friends to take a stand, but pledge loyalty to opposing forces.”

It sounds like there might be some major drama ahead on the show. Will Heather and Jen have a falling out?

The Real Housewives of Salt Lake City airs Wednesdays on Bravo at 10/9c.