Home Real Housewives of Orange County News RHOC’s Emily Simpson Reveals Rare COVID-19 Symptoms She and Shane Experienced and Shares If She’d Rather Be Stuck in a Room With Vicki or Braunwyn, Talks Nanny and Absence of Wedding Ring

RHOC’s Emily Simpson Reveals Rare COVID-19 Symptoms She and Shane Experienced and Shares If She’d Rather Be Stuck in a Room With Vicki or Braunwyn, Talks Nanny and Absence of Wedding Ring 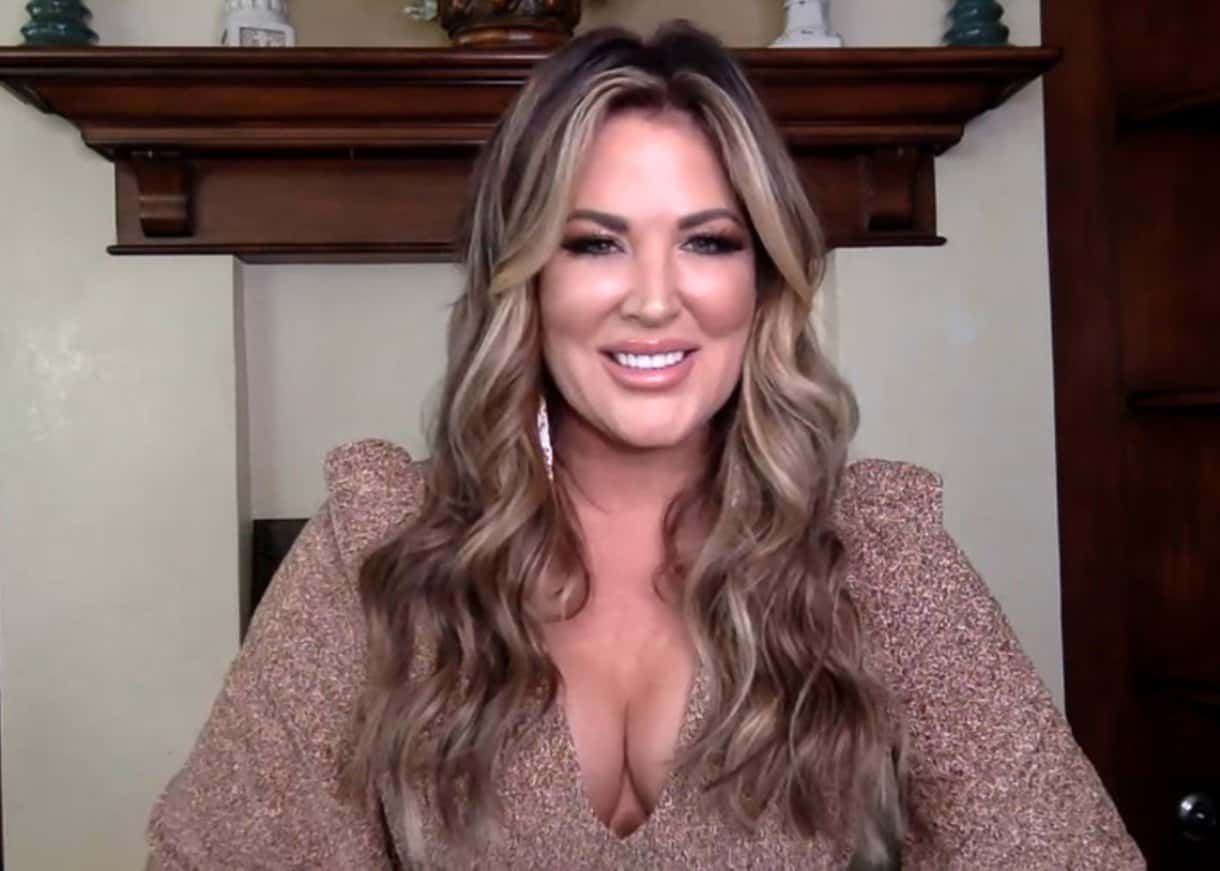 Emily Simpson opened up about her battle with COVID-19 during a recent “Ask Me Anything” session on her Instagram Stories.

After she and her husband Shane Simpson were seen being diagnosed with the coronavirus on The Real Housewives of Orange County, Emily spoke about their symptoms before revealing if she’d rather be stuck in a room with Vicki Gunvalson or Braunwyn Windham-Burke, and more.

“Any lingering COVID stuff? I am dealing [with] extreme hair loss,” a fan asked on January 11.

“About two months after I was sick with COVID my hair came out in huge chunks. I think it’s now back to normal. Shane has short term memory loss,” Emily replied. 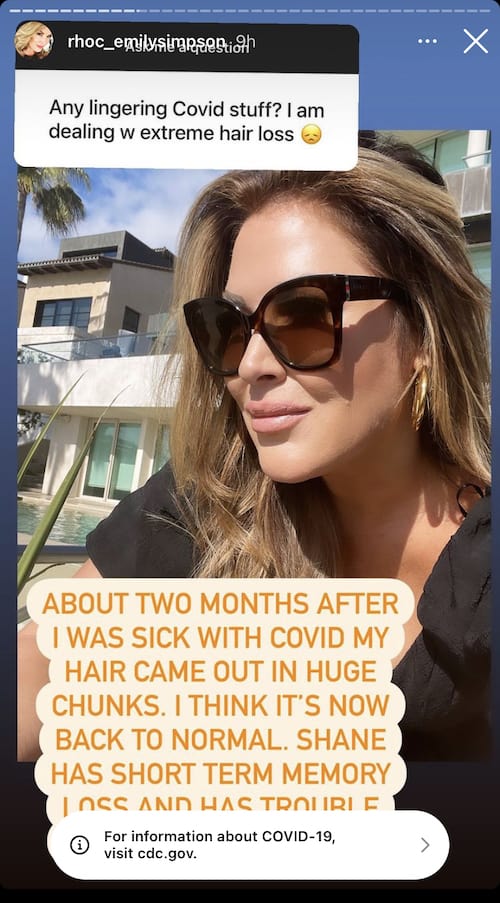 As RHOC fans saw weeks ago, Shane was hospitalized after being diagnosed with COVID-19 and spent several scary days away from Emily and their children.

“Who would you rather be stuck in a room with… Braunwyn or Vicki?” another asked. 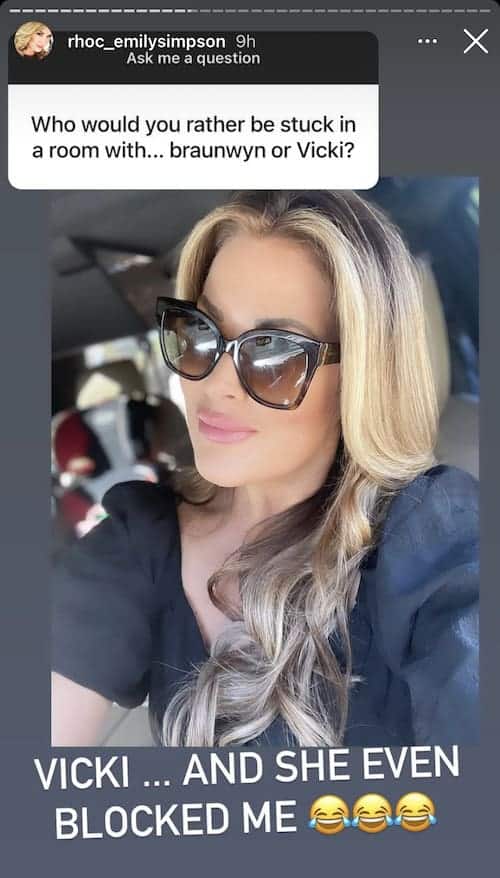 “Do you have a nanny?” asked another person. “Just wondering how you manage it all and look this hot!!!”

“I have a couple people I use to watch the kids if Shane and I go to dinner or a weekend trip etc… but no I do not have full-time help with my children,” Emily explained.

According to Emily, she’s been through far too much as a mommy not to spend as much time possible with her three kids.

“Shane and I are with them 99 [percent] of the time. I did not spend [five] years going through the trauma of several miscarriages, losing twins, repeated surgeries, a blood transfusion, and emergency surgeries as well as the daunting surrogacy procedure (twice!) just so I could pay for someone else to raise my children. Never. Going. To. Happen,” she wrote. 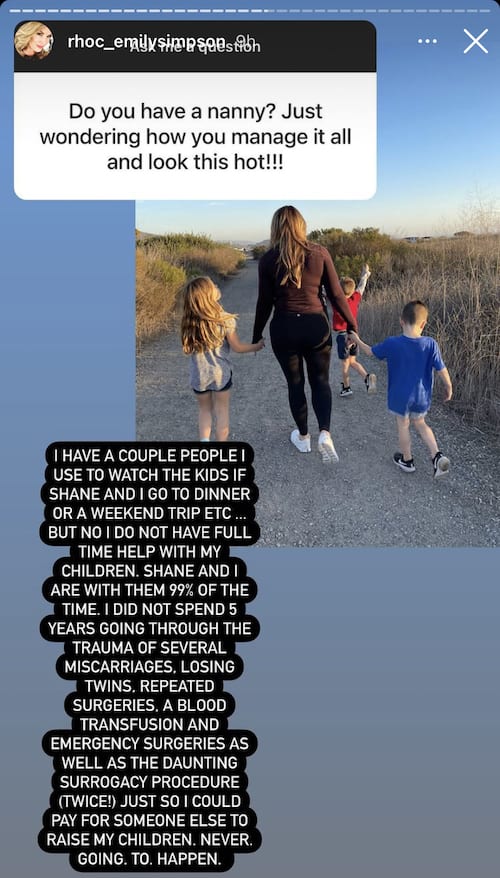 Another person wanted to know why Emily doesn’t wear a wedding ring.

“[Because] I lost it and I’m hoping [Shane Simpson] replaces it with something bigger,” she admitted. 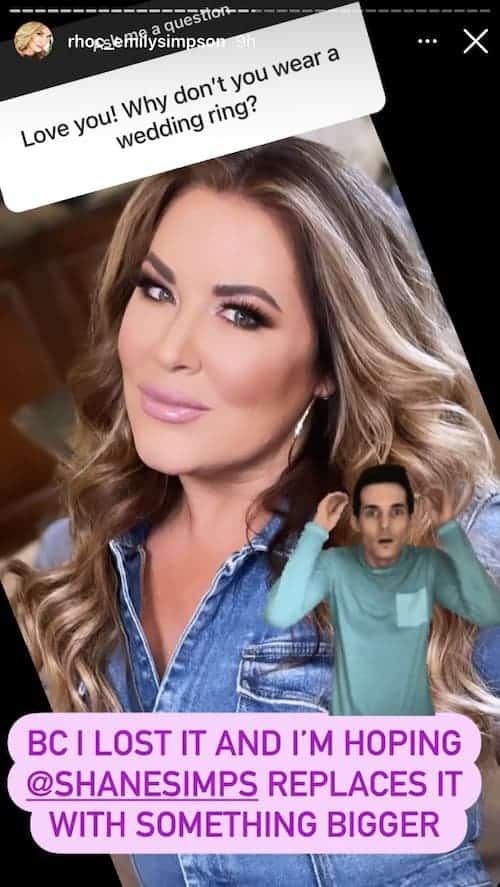 As for her marriage to Shane, which is in a great place following a messy 14th season, Emily said she and her husband are coming up on their 13-year wedding anniversary.

“13 years this February 14th. Yes we got married on Valentine’s Day,” Emily revealed. 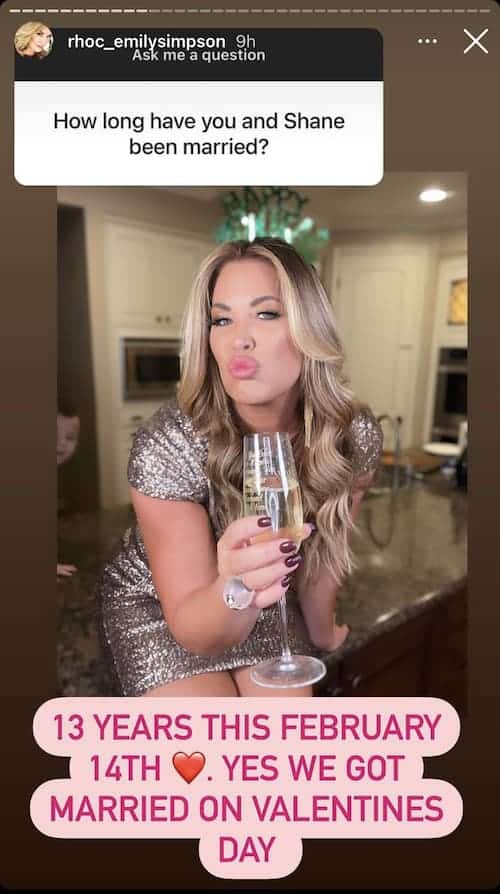