Home Real Housewives of Dallas News RHOD Star Dr. Tiffany Moon Fires Back at Brandi Redmond’s Claim That She Felt ‘Uncomfortable’ to Be Around Tiffany Following Her Video Scandal: “Am I in the Twilight Zone?”

RHOD Star Dr. Tiffany Moon Fires Back at Brandi Redmond’s Claim That She Felt ‘Uncomfortable’ to Be Around Tiffany Following Her Video Scandal: “Am I in the Twilight Zone?” 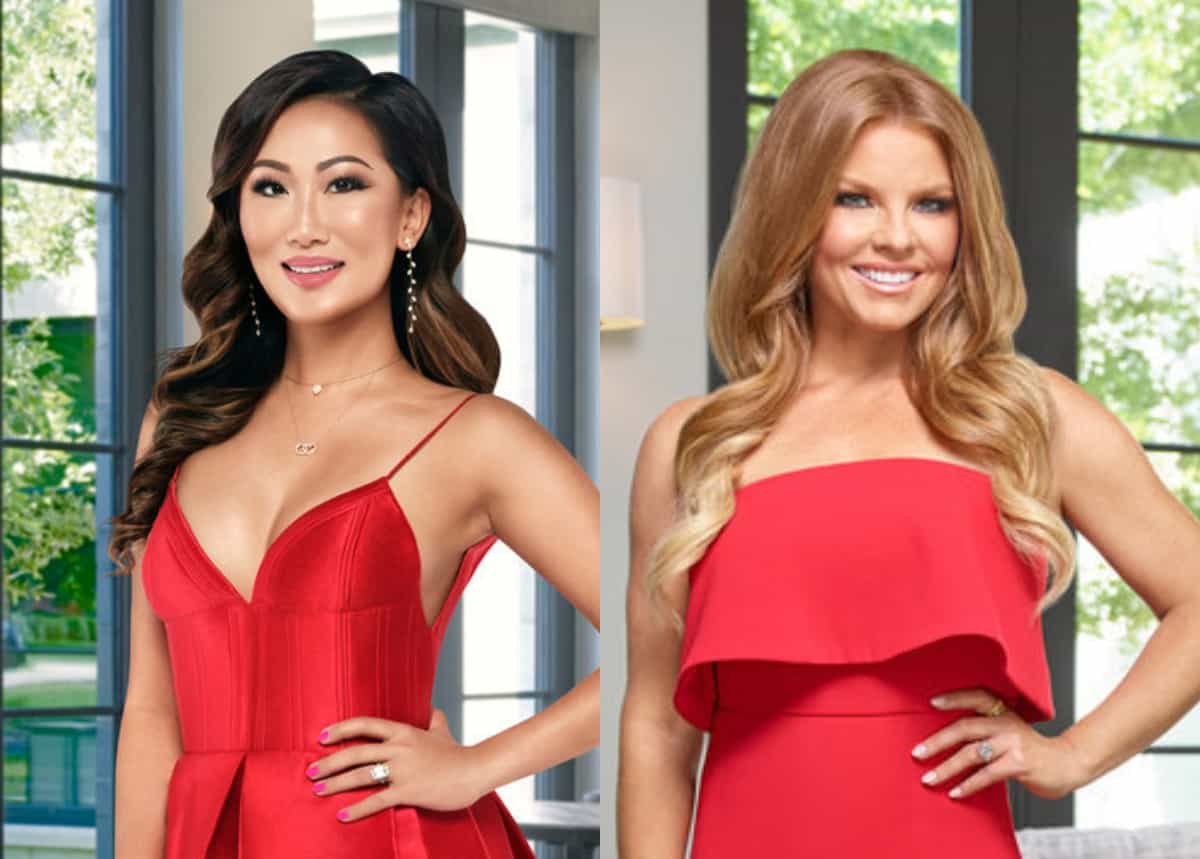 Dr. Tiffany Moon is clapping back at Brandi Redmond.

After watching as Brandi suggested she couldn’t be herself around her and worried that she felt “awkward” when they were together on Tuesday’s episode of The Real Housewives of Dallas, Dr. Tiffany took to her Instagram Stories, where she admitted to feeling like she was in the “twilight zone” with her castmate.

In her March 3 post, Dr. Tiffany, who was added to the cast in 2020, shared a message from a fan, who included a photo from The Simpsons.

“I thought I was seeing or hearing things. That lady said that [Dr. Tiffany Moon] makes her uncomfortable after she was patient enough to explain and forgive her for her offensive actions. What. was. that. Am I in the twilight zone or??” the fan asked.

“Yes this is how I feel sometimes- can y’all see it in my face?” Dr. Tiffany replied, also including the hashtag for “twilight zone.” 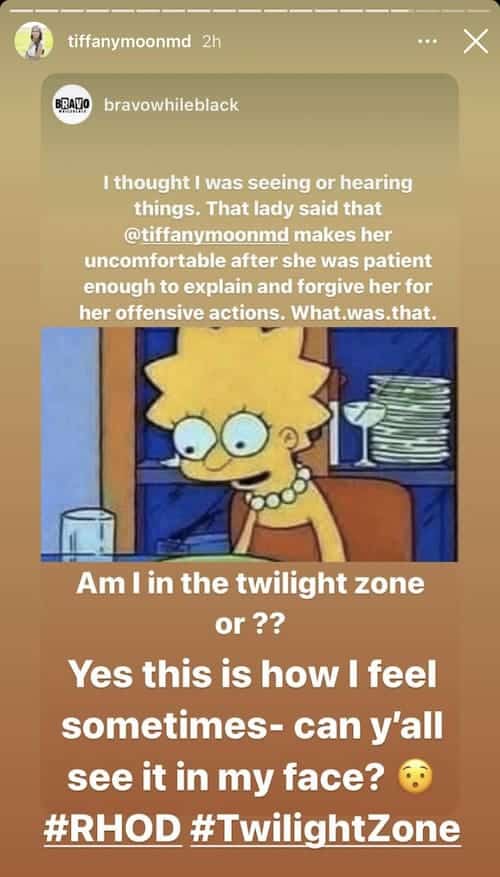 As fans of RHOD well know, Brandi found herself in the midst of a video scandal prior to the start of production on season five after seemingly poking fun at Asians with a social media clip in which she was seen squinting her eyes and talking with an accent.

“Do you feel awkward around me?” Brandi asked Dr. Tiffany during the latest episode.

In response, Dr. Tiffany said that despite Brandi’s offensive video, she didn’t believe the mother-of-four “intended” to be hurtful. The doctor also said that she didn’t want Brandi to feel as if she needed to hold back and proceeded to flood her with a slew of compliments. Still, Brandi didn’t seem to be able to move on.

In another social media post, Dr. Tiffany seemingly suggested that despite her efforts to forgive Brandi and move forward, she “can’t win.”

“I literally can’t win,” Dr. Tiffany wrote in the caption of a photo of herself on the RHOD cast’s trip to Austin on Twitter.

“What’s that feeling called when you always feel you’re being judged and can’t do anything right?” an additional message asked. 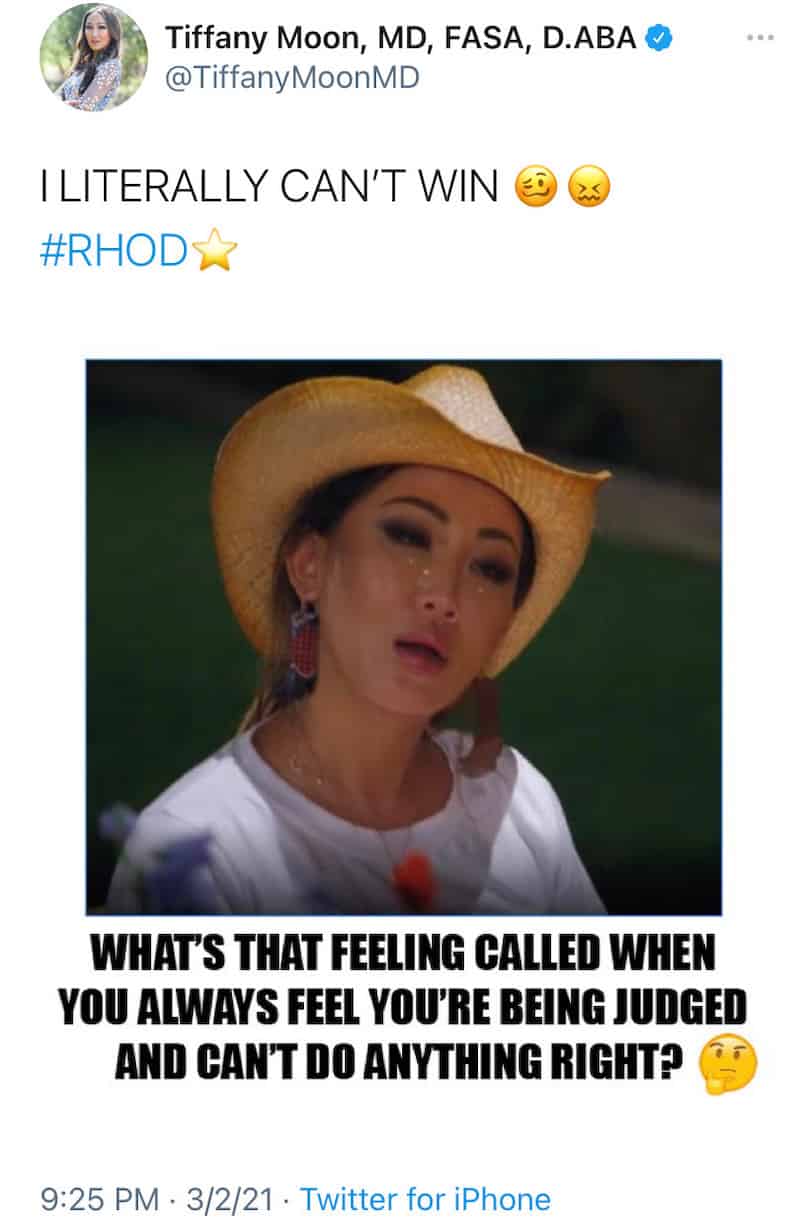 Although Dr. Tiffany’s drama with Brandi wasn’t the only drama she experienced during Tuesday’s episode, many of her fans and followers on Twitter took aim at Brandi and her antics in the comments section of Dr. Tiffany’s post.

“So Brandi shoots a video that makes fun of Asians. Brandi then decides the only Asian in the group makes her feel she can’t be herself for fear of being judged. It’s not Tiffany’s job to make Brandi feel okay about the mistake,” one person said.

“It’s not Tiffany’s fault that you feel uncomfortable around her and it is not a good look that you’re basically telling her that she’s making you uncomfortable when she’s done nothing wrong…” another person added.

The RHOD season five airs Tuesdays at 9/8c on Bravo.