Home Real Housewives of Beverly Hills News CA State Bar is Suspicious of Thomas Girardi’s Alzheimer’s Diagnosis and Reveals He Moderated Event Just Months Ago, Confirms Charges Against Him Are “Imminent,” Plus Details of His Mental Examination

CA State Bar is Suspicious of Thomas Girardi’s Alzheimer’s Diagnosis and Reveals He Moderated Event Just Months Ago, Confirms Charges Against Him Are “Imminent,” Plus Details of His Mental Examination

Days after Dr. Nathan Lavin, a Long Beach forensic and clinical psychiatrist, claimed in a sworn statement that the Real Housewives of Beverly Hills attorney would be unable to participate in future court proceedings against him, the State Bar of California is raising questions about the diagnosis.

On March 12, the Los Angeles Times revealed that in a Superior Court filing on Friday, lawyers for the bar are wondering if Thomas’ supposed “late onset” Alzheimer’s disease was a possible case of malingering, which is defined as a fabrication or exaggeration made to either gain or avoid a certain outcome.

The filing also confirmed the bar is preparing to move against Thomas’ law license, which was reportedly deactivated earlier this month, and claimed Thomas had “willfully misappropriated client funds and refused to obey a court order.”

While disciplinary proceedings against attorneys are typically kept under wraps, the bar confirmed “imminent” charges against Thomas in their filing in an apparent effort to battle back against his conservatorship case, which his representation seemingly hopes will impede the agency’s ability to prosecute him.

During a hearing on Monday, Thomas’ temporary conservator, younger brother Robert Girardi, will attempt to gain permanent conservatorship over his estate with the help of his psychiatrist’s claims regarding Thomas’ short-term memory loss, delusions, and “severely disorganized thinking.”

In response to the conservatorship proceedings, bar attorney James J. Chang pointed out that the quest has come “under highly unusual circumstances” and “only after [Girardi] became enmeshed in mounting legal troubles and as he is facing imminent State Bar discipline.”

He further said that while Thomas, who is currently estranged from wife Erika Jayne, “is now incapable of caring for himself,” he attended speaking engagements through November 2020.

The bar’s top prosecutor, Melanie Lawrence, revealed Thomas participated in two separate appearances, one of which took place on November 21 at an event for the Consumer Attorneys of California.

“Mr. Girardi moderated a 1.5-hours long continuing legal education panel discussion … regarding how to conduct a jury trial and engaged conversantly with the four other attorney panelists,” she wrote.

The bar’s attorneys are also requesting an independent examination of Thomas by a neuropsychologist in their filing.

On March 11, attorney Ronald Richards spoke out on the matter of Thomas’ supposed mental incompetency, confirming that no physical tests were done on the RHOBH attorney.

“Update on Girardi capacity: Attached is the check the box capacity declaration from the Court’s psychiatrist,” he tweeted. “There were no physical tests done. Presumptively, if you believe the diagnosis from Girardi’s responses, it can be cross checked by a brain exam and a move to an assisted living home.” 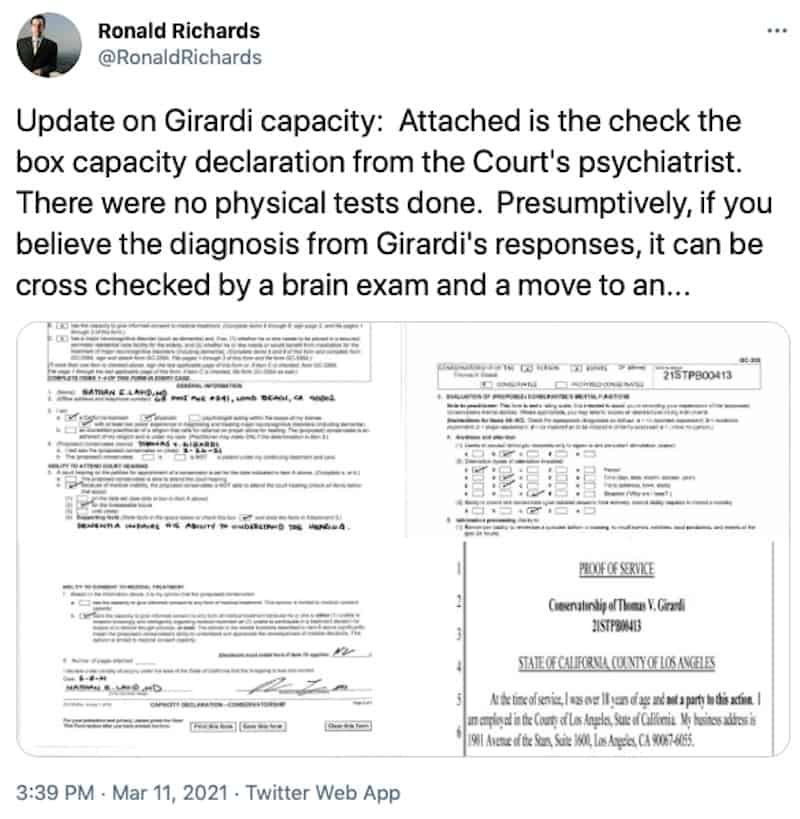 “This conduct plus actual physical tests can confirm the diagnosis,” he continued. “This exam was noninvasive. If TG actually moves into a home, it would add credibility. Living in your own mansion does not.”

In a third message, Ronald said that in a criminal case, Dr. Lavin’s diagnosis alone would not be accepted.

“There are a lot of factors but this one leans towards [Thomas Girardi] until further tests are done. [By the way], in a criminal case, they would never accept this alone,” he noted. “This is the state of the record. The rest is for you to comment and decide. This would be a very fast onset as well.”

There are a lot of factors but this one leans towards TG until further tests are done. Btw, in a criminal case, they would never accept this alone. This is the state of the record. The rest is for you to comment and decide. This would be a very fast onset as well. #girardifraud pic.twitter.com/qCJ5nT4FdG

The Real Housewives of Beverly Hills is expected to return to Bravo for season 11 sometime this spring.