Thomas Girardi is no longer a part of the Consumer Attorneys Association of Los Angeles.

As he faces allegations of embezzling millions from former clients, the estranged husband of The Real Housewives of Beverly Hills cast member Erika Jayne has been stripped of two legal awards and removed from the organization’s Hall of Fame.

In a statement from the president of CAALA, Genie Harrison, it was confirmed that due to Thomas’ behavior as an attorney, which was deemed as “inconsistent with the morals, ethics and standards of CAALA,” the organization had taken steps to terminate his membership before learning he had resigned.

“We are appalled by the victimization of clients to whom fiduciary duty is owed, and our sympathies extend to those lawyers and vendors whose trust was violated,” Genie’s statement read.

“On March 18, CAALA’s Board of Governors (BOG) voted overwhelmingly to revoke the awards previously given to Mr. Girardi by the organization, the 1995 Trial Lawyer of the Year and the 2004 Ted Horn awards, and to remove him from CAALA’s Hall of Fame,” the statement continued. 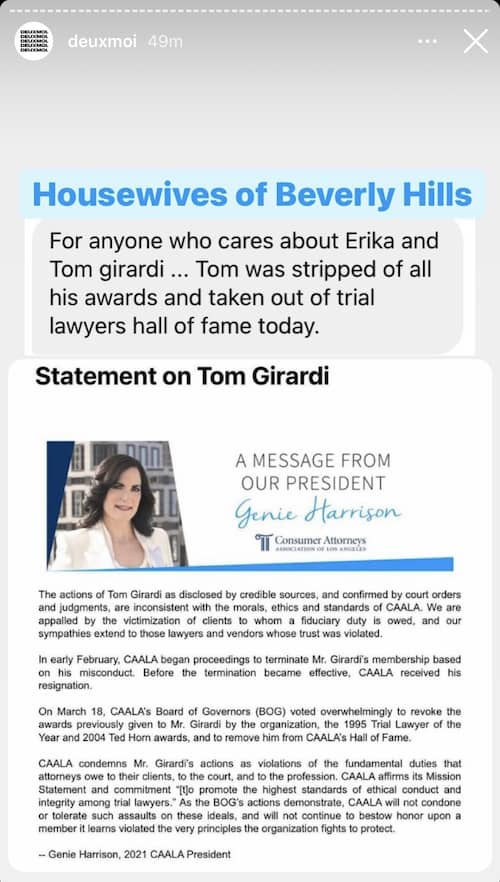 At the end of last year, Thomas was hit with numerous lawsuits from former clients and other lenders, and ultimately, because of his failure to pay off those owed, he was forced into involuntary bankruptcy. Since then, Thomas’ brother has been named as his temporary conservator as he attempts to convince the court that he is mentally incompetent.

“CAALA condemns Mr. Girardi’s actions as violations of the fundamental duties that attorneys owe to their clients, and to the profession. CAALA affirms its Mission Statement and commitment ‘[t]o promote the highest standards of ethical conduct and integrity among trial lawyers.’ As the BOG’s actions demonstrate, CAALA will not condone or tolerate such assaults on these ideals, and will not continue to bestow honor upon a member it learns violated the very principles the organization fights to protect,” the statement concluded.

While a Long Beach forensic and clinical psychiatrist examined Thomas in late February and determined he was suffering from “late onset” Alzheimer’s disease, he’s been accused of staging not only his alleged mental handicap but also his split from Erika.