PHOTOS: ‘RHOBH’ Erika Jayne Sells Luggage on Instagram Amid Divorce Drama as Insider Claims She and the Allegedly Incompetent Thomas Girardi Have “No Counsel” for Bankruptcy Case 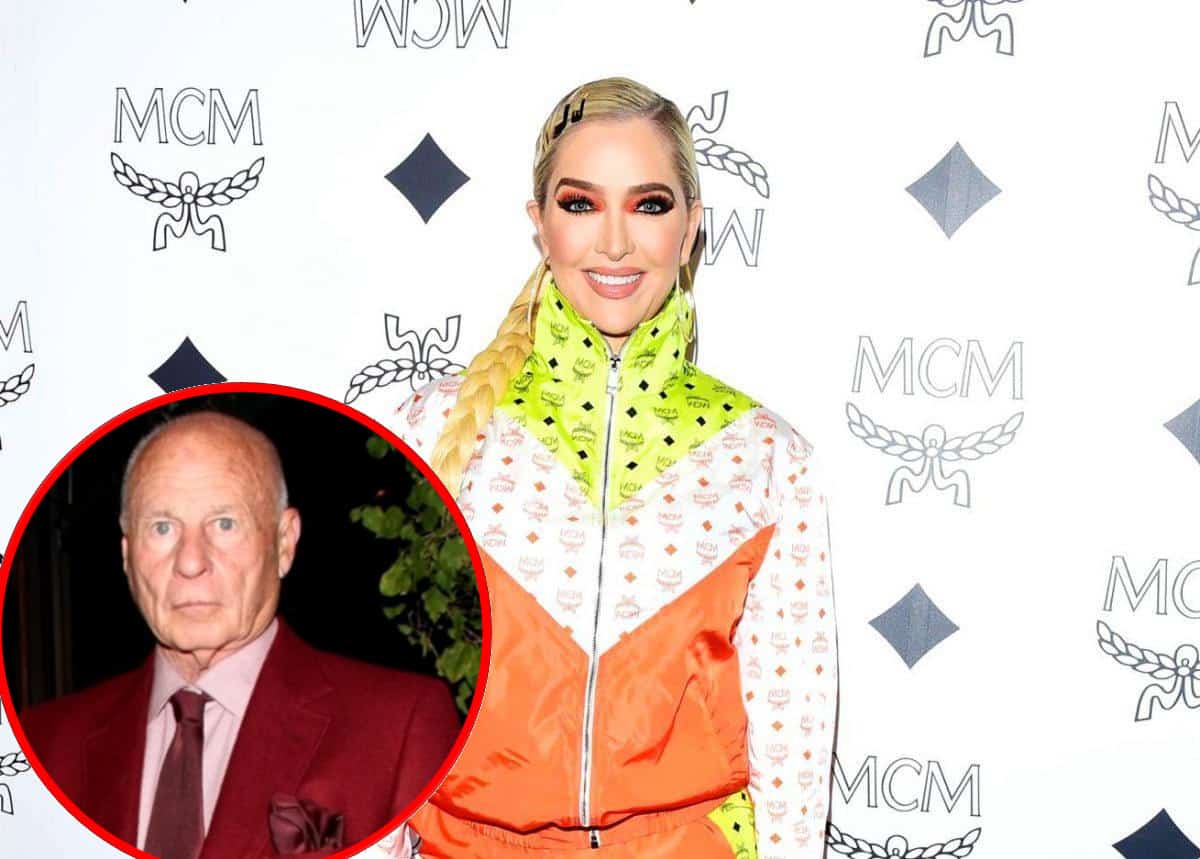 Erika Jayne appears to be taking her finances into her own hands as she and her estranged husband, Thomas Girardi, prepare for the upcoming hearings in the bankruptcy case against him.

While Thomas, whose attorneys have claimed he is mentally incompetent, attempts to stall the court from moving forward with their proceedings, the Real Housewives of Beverly Hills star has taken to her Instagram Stories to promote the sale, and discount codes, of custom luggage from Lily and Bean.

On January 28, Erika shared a series of short videos in which she was seen wearing a pink tracksuit as she held a large black tote bag and pulled a black, pink, and white suitcase, both of which featured her initials, “EJ.”

“Customizable and Stylish. Get yours!” Erika wrote in the caption of her first video clip. 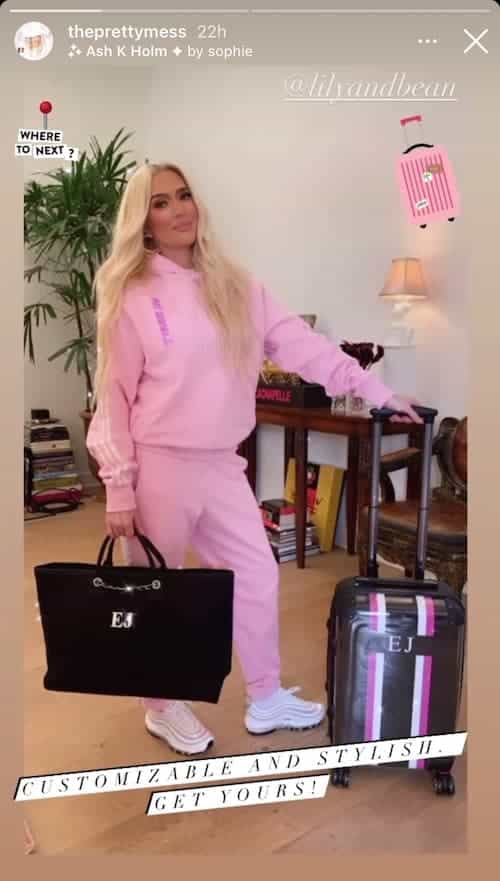 “Use code Pretty Mess for 15 [percent] off,” she added in the caption of her second. 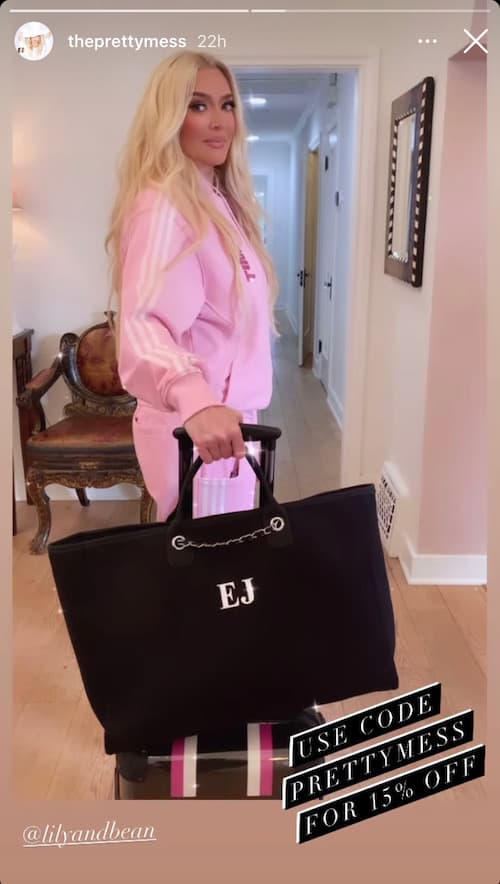 Around the time that Erika’s posts were shared, attorney Ronald Richards offered a series of updates on the bankruptcy case against Thomas and his law firm, Girardi Keese, on Twitter, including a post in which it was confirmed that both Erika and Thomas are without counsel amid not only Thomas’ bankruptcy, but also a number of lawsuits against them.

“Girardi’s Trustee Rund asks the Court to extend the time for Girardi to file his schedules until March 1, 2021, after the meeting of creditors. This is a bizarre request in that [Thomas Girardi] will never appear at a MOC due to his alleged incompetence,” he wrote in his first message. 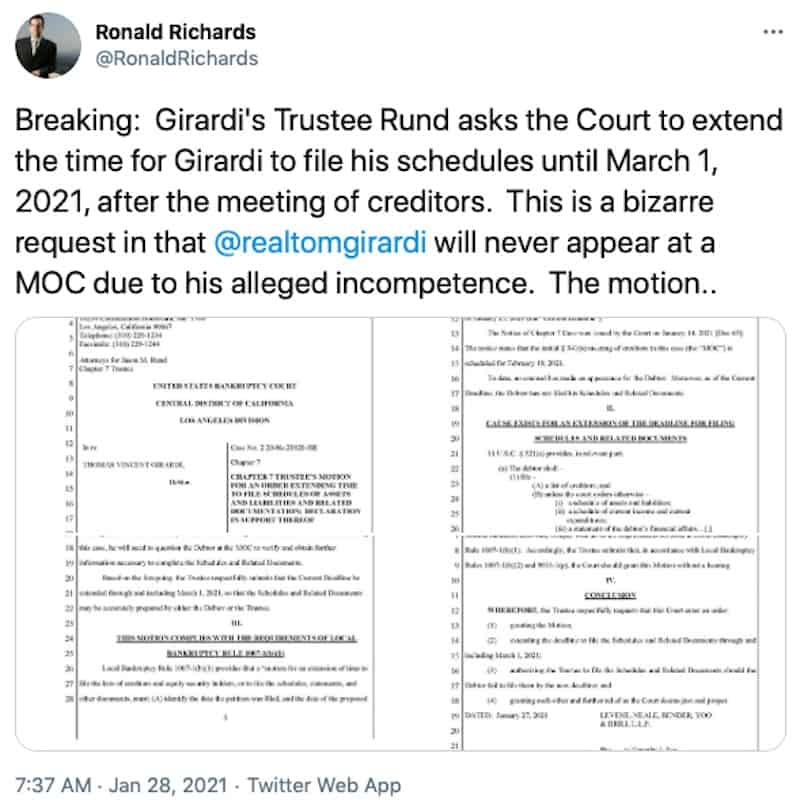 “The motion shows that there is no counsel for Tom or [Erika Jayne] and that he hasn’t made any effort to prepare schedules,” he added.

shows that there is no counsel for Tom or @erikajayne and that he hasn't made any effort to prepare schedules. #RHOBH #GirardiFraud pic.twitter.com/pLjfJreA1Z

Then, in a third tweet, Ronald reacted to a woman who suggested Rund was buying time because he knew he’d ultimately have to prepare the documents himself.

“[It’s] hard to file if the debtor is playing dumb,” the attorney wrote.

While Erika attempted to sell off a number of her designer duds at the end of last year, a judge has since warned her against doing so, claiming that the items could be deemed as community property co-owned by her estranged husband.

The Real Housewives of Beverly Hills season 11 is expected to premiere sometime this spring on Bravo.