Kelly Dodd Leaks Text Messages From Braunwyn Windham-Burke and Blames Her For RHOC Firing As She Slams Ex Costar As “Nut Job Narcissist,” Plus Braunwyn Responds 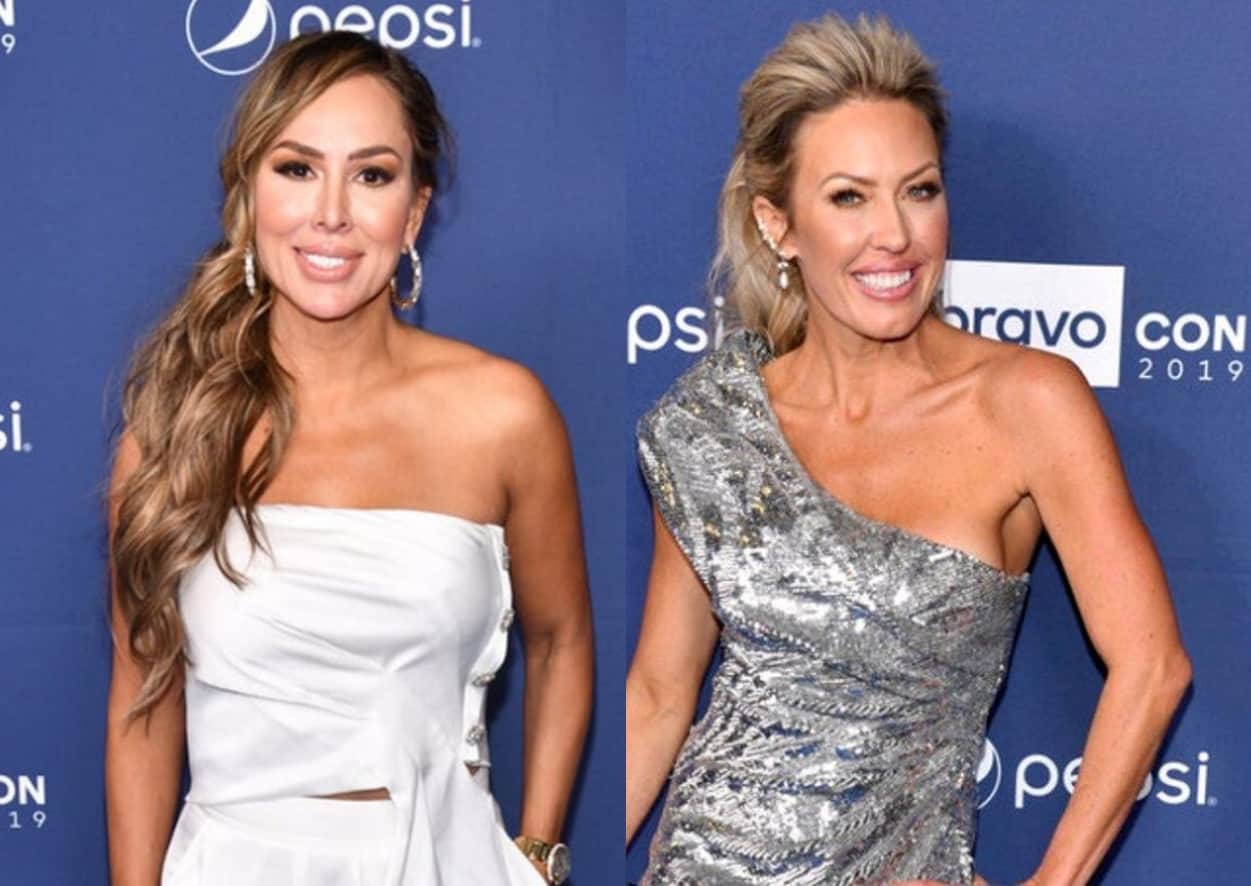 Kelly Dodd and Braunwyn Windham-Burke are no longer Real Housewives of Orange County cast members, but that doesn’t mean the drama between the two has ended.

Apparently, Kelly believes Braunwyn is responsible for their firings. On June 17, she took to Instagram to share the private conversation she had with the mother-of-seven after they received the news. It seems Braunwyn was the one to initially reach out as she simply wanted to check on her former co-star, but Kelly was having none of it.

“I hope you’re okay, I know we’ve been through hell and back but I’m here,” Braunwyn wrote in a message to Kelly, which was captured by Queens of Bravo on Instagram.

However, Kelly didn’t appreciate the kind gesture as she slammed Braunwyn for her “phony storylines” and for suggesting she’s “racist” and homophobic.

“This was your fault. We’d still be on the show if you didn’t make things so dark and ugly and brought all that political ‘woke’ BS,” the controversial star fired off. “Your lies about me, calling me a racist and a homophobe were horribly destructive and your phony storylines didn’t help either.”

As fans well know, Kelly — who joined the cast in 2016 — received a great deal of criticism during season 15 for her problematic comments regarding the COVID-19 pandemic as she claimed the virus was “God’s way of thinning the herd.” Furthermore, she also seemingly mocked the Black Lives Matter movement when she shared a photo of herself wearing a “Drunk Wives Matter” hat.

Though the former reality star eventually apologized for her behavior, she later went on to poke fun at the pandemic yet again when she was heard yelling, “Cheers,” to someone who said, “To super spreaders.”

Rather than clapping back at Kelly, Braunwyn simply responded, “Well I’m still sober and still gay, like I said if you ever want to talk I’m here.”

Kelly was clearly furious with Braunwyn for having the “audacity” to reach out to her, which she explained in the caption as she shared the screenshots of their conversation with her Instagram followers. 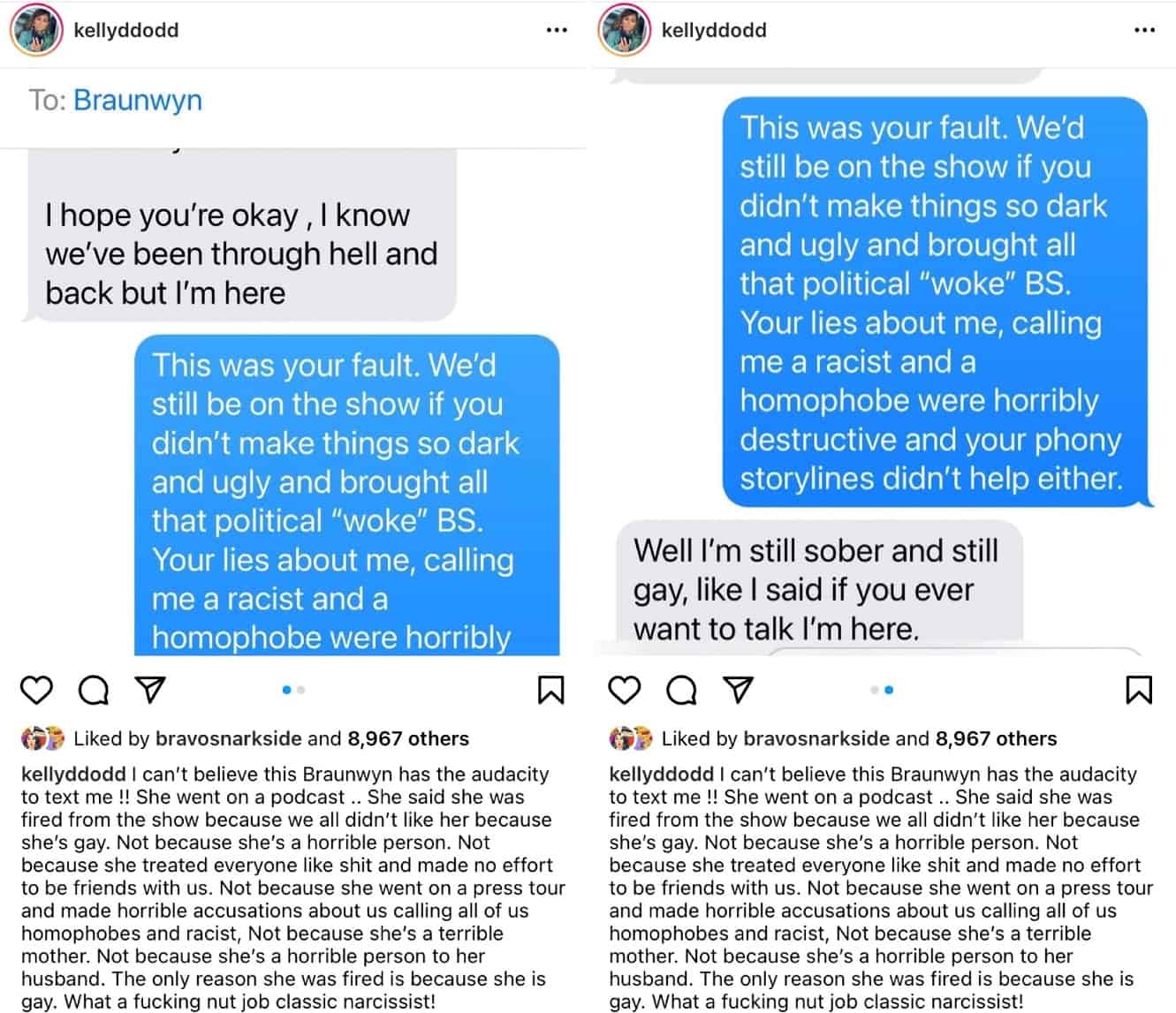 Hours after Kelly leaked the exchange, Braunwyn told Page Six that she’s not too concerned with Kelly’s post as she got a good chuckle out of how “wildly immature” her former co-star made herself look.

“You just have to laugh at this point — only Kelly Dodd would post screenshots of her own texts that make her look wildly immature,” she snarked. “I guess that’s what being bitter is like, and I tried to empathize with her, as you can see.”

However, Braunwyn claims the mother-of-one failed to include the texts where she wished Kelly “nothing but the best” and told her she “hoped she has a beautiful life.” She’s also not ruling out a potential friendship with Kelly one day as she believes in “second chances,” noting that even though they’re no longer on the show together, they’re “still neighbors.”

Braunwyn concluded by stating she’ll continue to be “woke” because she wants to be a voice for those who are suffering.

“As far as ‘woke and political BS goes,’ I will never stop or be ashamed for standing up for communities who are hurting,” she shared. “If she wants to see what I’ve been up to, she can unblock me, and check out my Amplified Voices series on Instagram. I bet she’s going to be thrilled with what we are doing with it next.”

The season 16 cast of The Real Housewives of Orange County will reportedly begin filming next month.