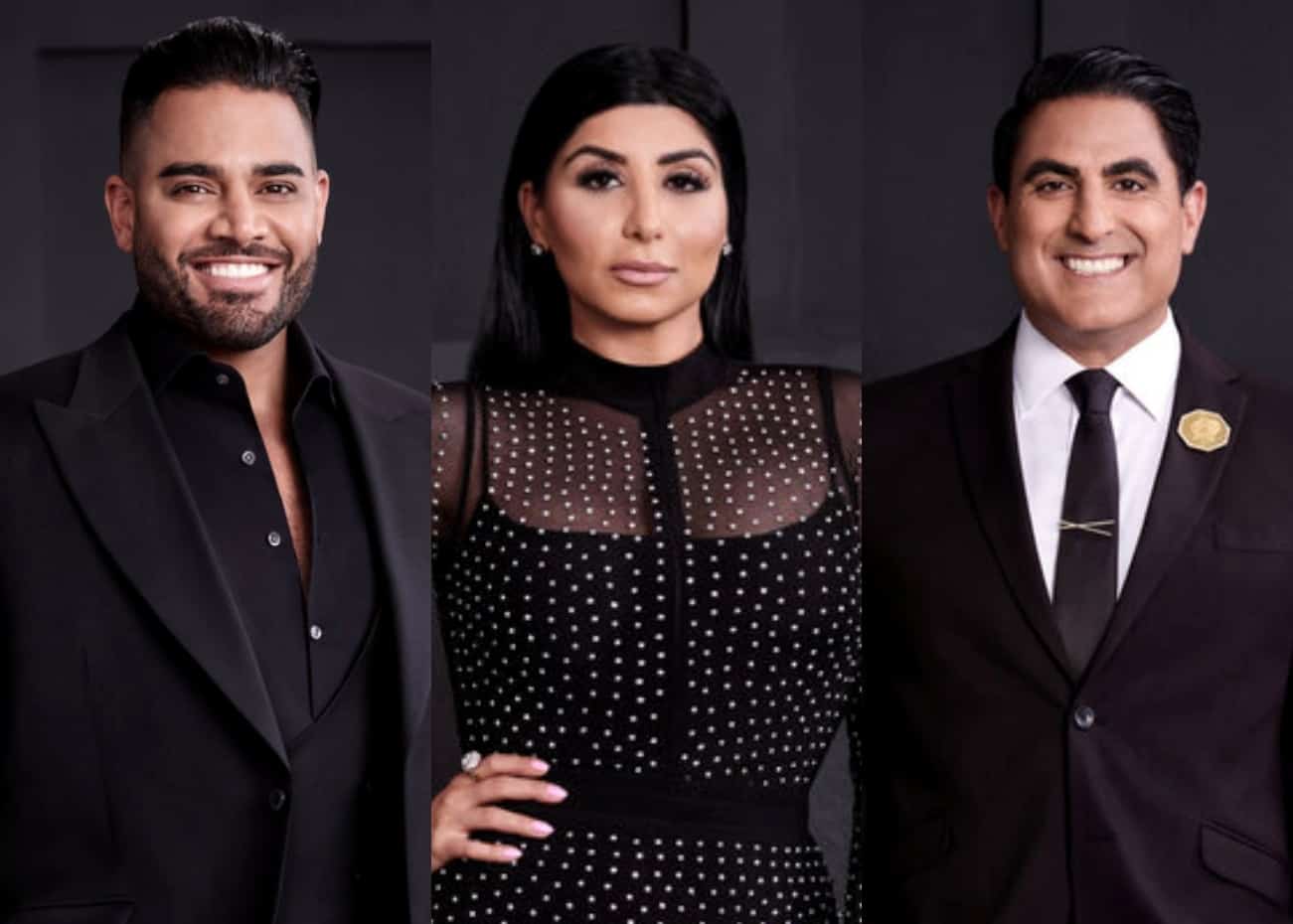 Mike Shouhed took to his Twitter page on Sunday night, where he seemingly suggested that his longtime friend, Reza Farahan, attempted to portray him as a “woman beater” with the help of Destiney Rose.

Amid the latest episode of Shahs of Sunset, Mike agreed with a fan who made shocking allegations against Reza while also responding to another fan who advised him to never remarry as Reza made a series of suggestions of his own.

“I’m no big fan of yours but someone needs to say it. Destiney knew you were drunk when she started laying hands on you. She was hoping you would push back to portray you as a woman beater. Reza was [100 percent] behind it. She’s his goon,” a fan page wrote on June 27, citing the physical encounter Mike and Destiney had at her Halloween party.

“Say it again so the people in the back can hear you lol,” Mike agreed. 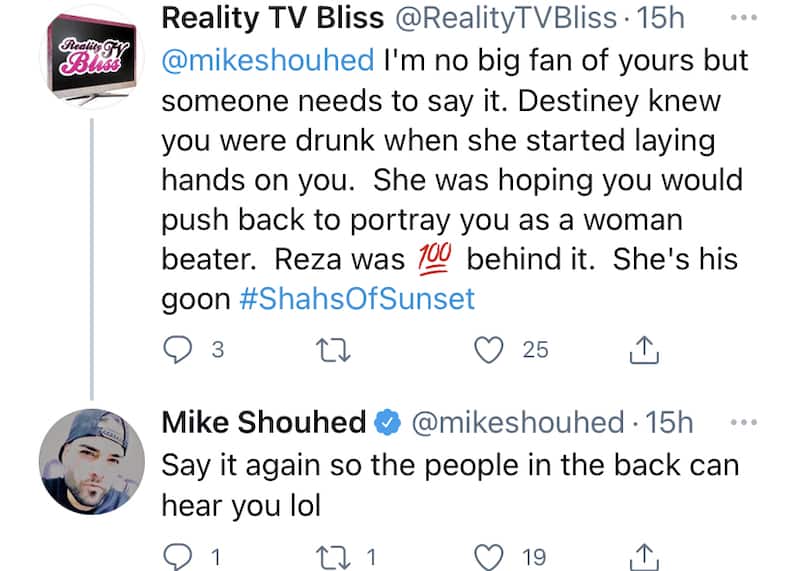 In a second message, Mike shared a re-tweet from a woman who reminded Reza that Mike had his back when his relationship with Adam Neely was being berated with cheating rumors during season eight.

“Rez, how would you feel if Mike did you how you’re doing him when you and Adam were going through your ish with past indiscretions on both sides. Like GG said, he just wants your support!” the message said. 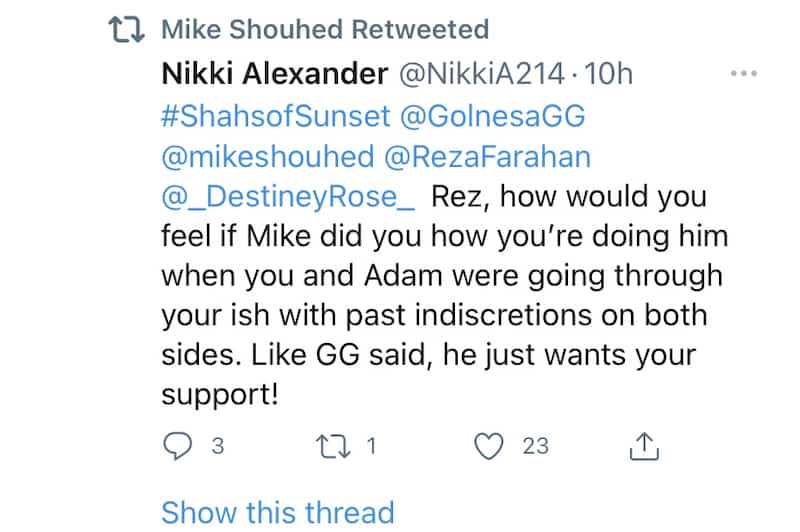 Mike also commented on Destiney’s claim that she got physical with him at her party because she was triggered by a past experience with a stalker.

“A stalker is why you got physical with Mike. Funny how this is the 1st time we’re hearing about this. Is a stalker the reason for the nasty card questions too aimed at Mike too?” a fan wondered. 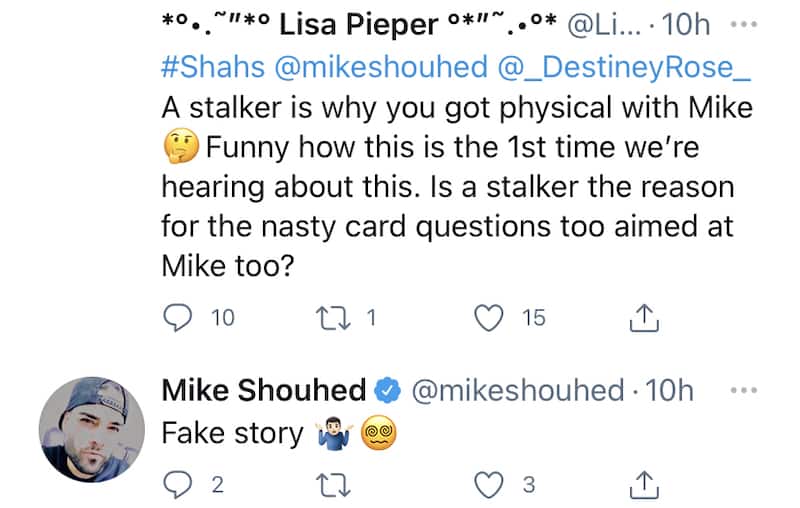 As for the fan who told him not to remarry, Mike suggested she must be watching a different show.

“Glad to see that Mike is still not taking ownership of his cheating and his behavior and still trying to attack others…what a f-cking failure at a grown up loving relationship. Don’t ever marry another woman again,” the woman wrote.

“Are you watching the same show??” Mike replied. 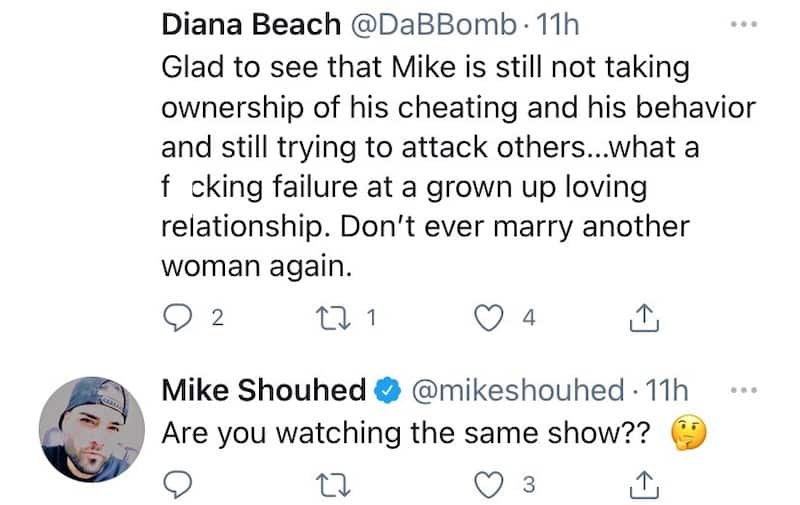 Meanwhile, on Reza’s Twitter page, he revealed the truth surrounding the seating arrangements at Destiney’s event.

“What Mike is leaving out of this, is Destiney had us all choose numbers from a bowl to create a random seating arrangement – everyone sat where their number was except for him and Paulina,” Reza alleged.

Reza also re-tweeted a message from a Shahs viewer, who suggested Destiney meant no harm.

“Oh trust me we seen and heard [Destiney Rose’s] reason behind the seating she wanted people to talk with people they normally don’t as much with is a great party socializing idea. Mike just was super paranoid I think he scarred to loosed Paulina and her bank account,” the re-tweet stated. 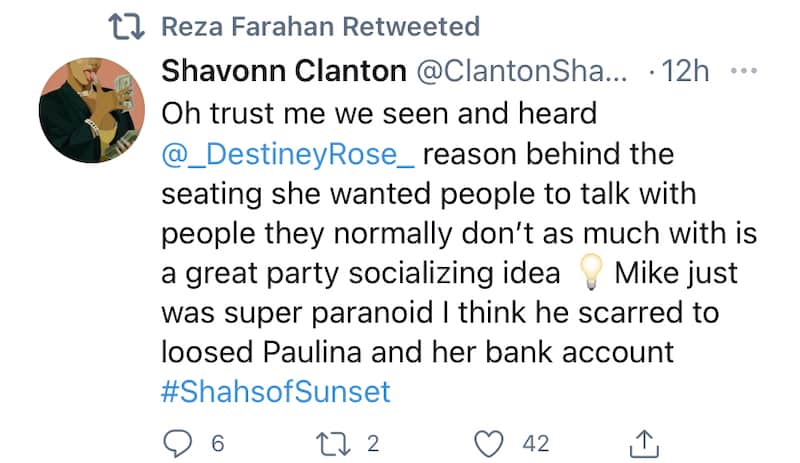