Home Real Housewives of Potomac News Karen Huger Responds to Robyn’s RHOP Diss as Mia Claps Back at Fan Who Suggests Husband Could Leave Her, Plus She Shades Askale’s Claims of Having “Several” Businesses

Karen Huger Responds to Robyn’s RHOP Diss as Mia Claps Back at Fan Who Suggests Husband Could Leave Her, Plus She Shades Askale’s Claims of Having “Several” Businesses 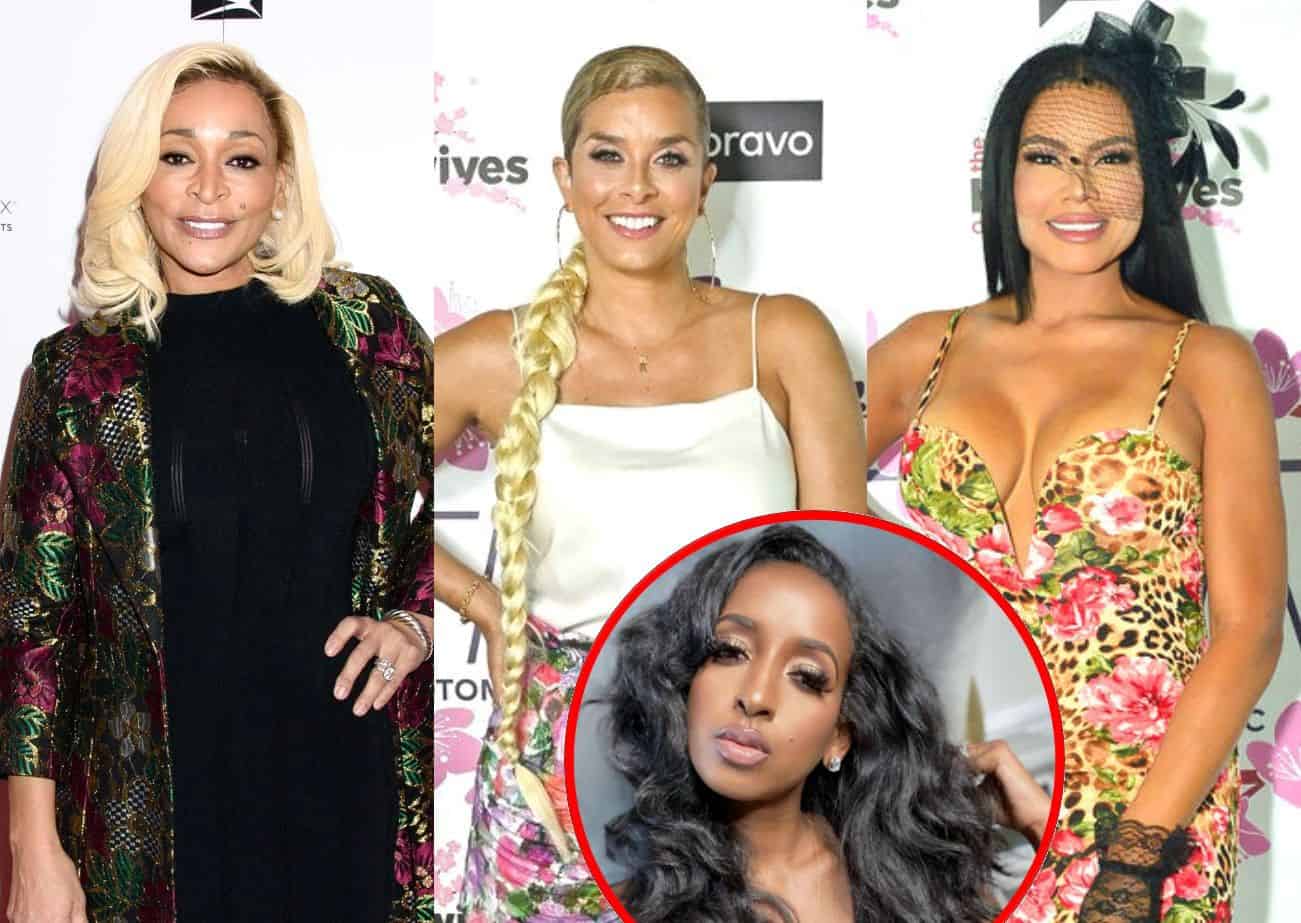 Karen Huger took aim at Robyn Dixon in a series of tweets following the latest episode of The Real Housewives of Potomac.

As Robyn seemingly blamed Karen’s alleged trash-talking for her and Gizelle Bryant‘s strained relationship with newbie Mia Thornton, Karen reacted to her on-screen comments on Twitter as Mia took aim at Askale Davis in a couple of posts of her own.

“[Robyn Dixon] is FULL of it I swear,” a fan wrote to Karen on August 1. “[Karen Huger] aint told that girl NOTHING about y’all!! Y’all ain’t that damn important Lawd.”

“Love it when production handles the truth! It’s not like we’re not watching,” Karen agreed. 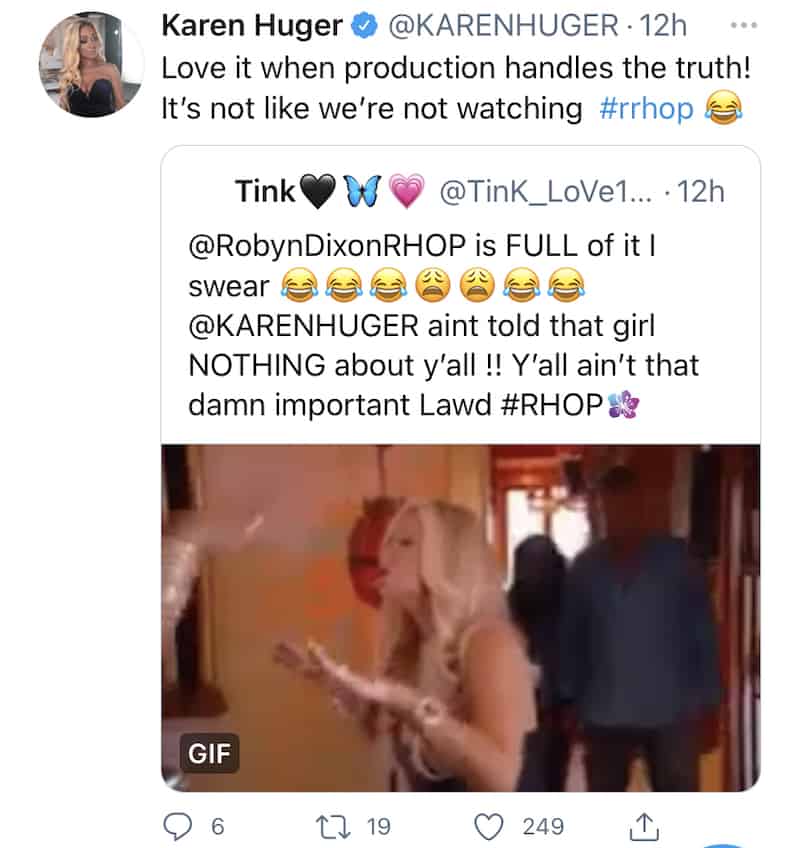 “Robyn who blindly follows Gizelle lead has the [nerve] to question Mia’s relationship with Karen?” another fan wondered.

During Sunday’s RHOP, Karen and Mia discussed the way in which Robyn was seemingly doing the dirty work of Gizelle after the ladies invited Mia out for drinks. 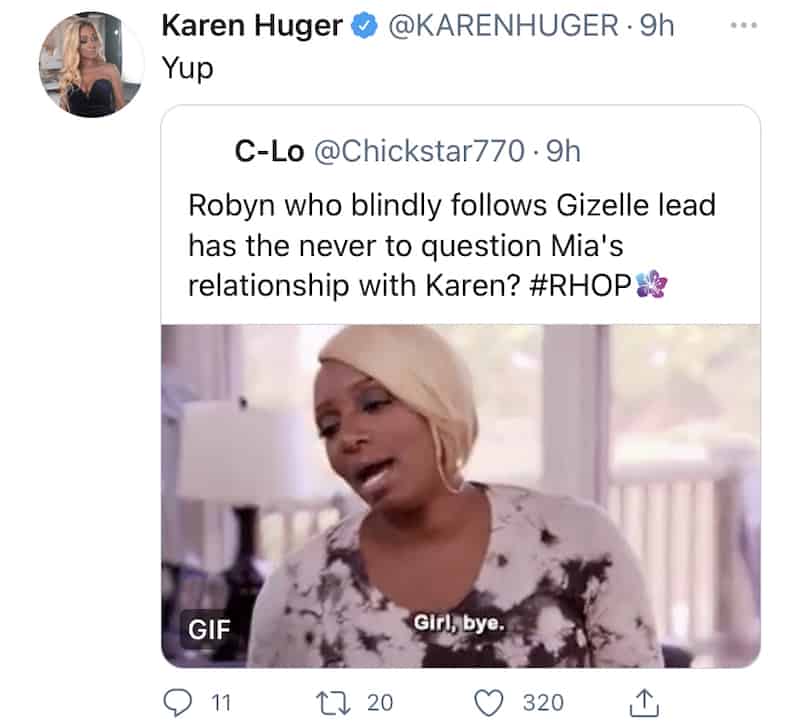 Meanwhile, on Mia’s Twitter page, before she addressed her on-screen drama with Askale, she reacted to a social media user who suggested her husband could one day leave her for another woman.

“But if your husband decides to leave you for a younger woman with a natural face/body you will be back to unboxing your escort gowns looking for the next gentleman’s club to work in so you can trick with the next old a– man,” the fan stated.

“Nope. Not when ERRRRYTHANG is in my name. Try again,” Mia responded. 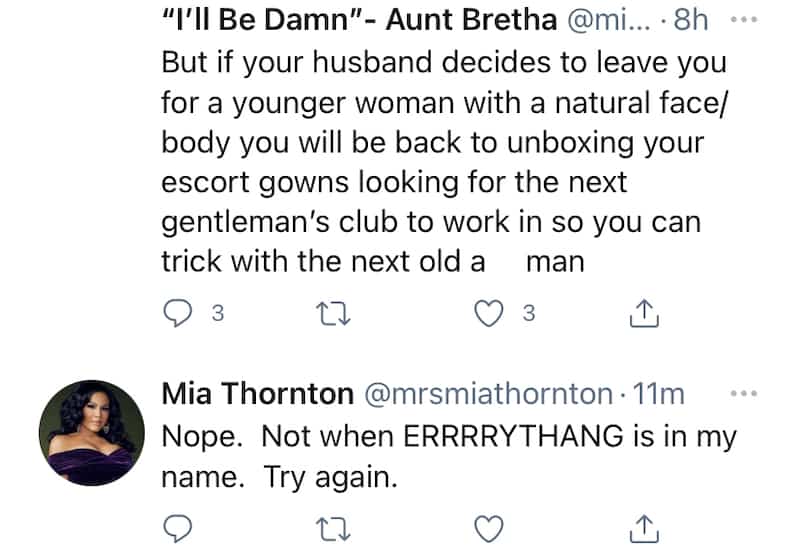 In a second tweet, Mia reacted to a fan who recounted her conversation with Askale about her businesses by noting Askale hasn’t actually named any of them.

“That’s it that’s the read ‘several,'” they tweeted.

“We haven’t heard of one,” Mia noted. 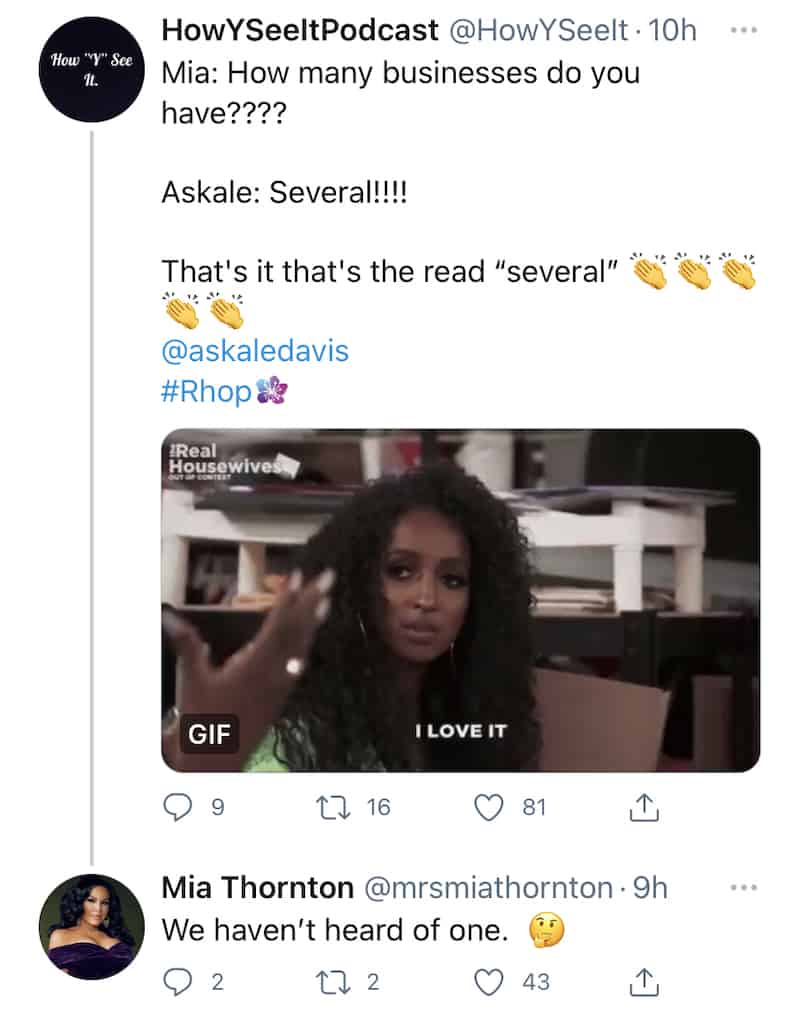 Also on Twitter, Mia reacted to Askale labeling her as “rude” after Sunday’s show, which featured Askale expressing her dislike of the way Mia handled her drama with Gizelle.

“Let’s not confuse direct with rude. That was VERY rude,” Askale said.

“Nice Try, ‘Friend’ — You were driving on the wrong side,” Mia replied of the drama that took place between them. “I didn’t get to where I am today by being ‘Delusional.’ Next Season, Roll with the Real Bosses, You’ll get more screen time. No Shade. Love you tho!”