As Brock Davies was seen admitting to Lisa Vanderpump that he once “slapped” his ex-wife, Scheana explained the timeline of the domestic violence order (DVO) that was filed against him and revealed her fiancé suffers from dyslexia, which causes him to mix up dates.

“Also, just to clear things up [because] Brock is terrible with timelines and unfortunately suffers from dyslexia but the DVO was only in place for about 5 months back in 2013. Idk why he said 4 years ago. The kids came to America and saw him way after that was lifted too. Just FYI,” Scheana tweeted.

Brock also shared Scheana’s message on social media, and he explained why she didn’t correct his timeline mixups.

“I don’t have Twitter… I asked Scheana to tweet this on my behalf. She wanted to chime in and correct me, but realized that would look like she was putting glitter on it,” he wrote on his Instagram Story. 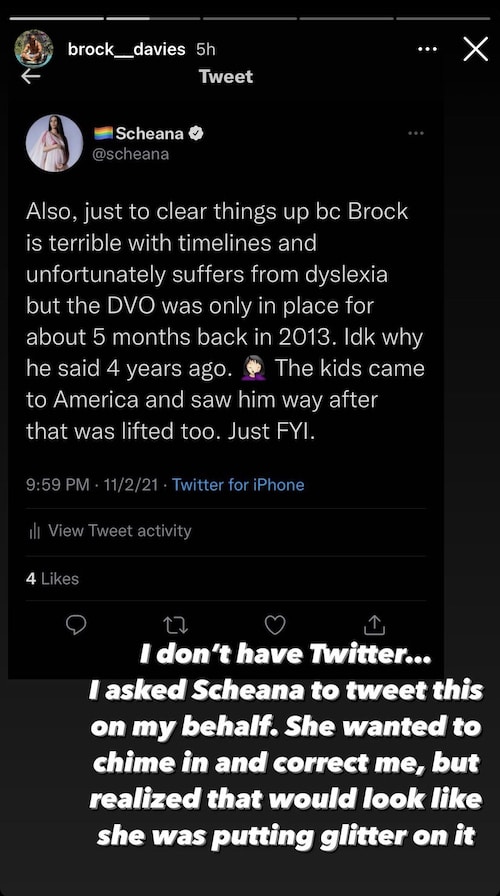 Then, in another post, Brock further discussed his dyslexia diagnosis and the timeline of his DVO.

“When I was younger I was diagnosed with dyslexia, so I understand I use the wrong words in the wrong sentences sometimes… I also would like to acknowledge that my domestic violence order was served in March 2013 and was dropped in [August] 2013,” he shared. 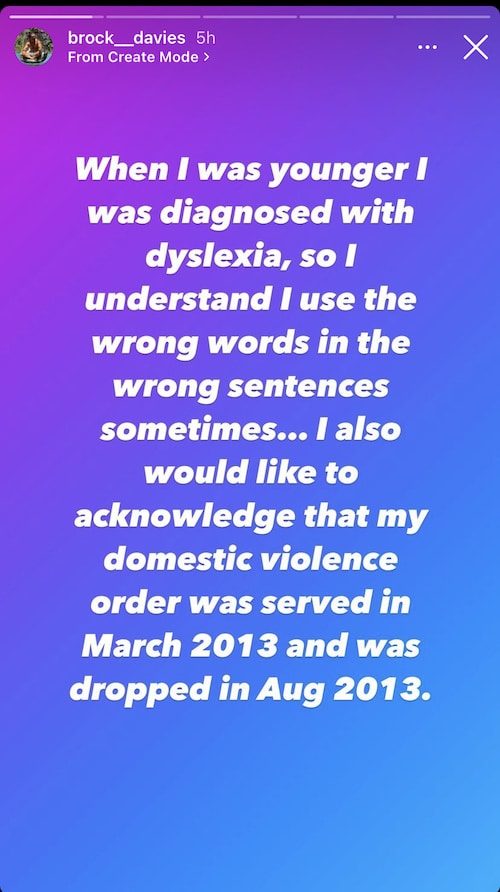 During Tuesday night’s episode of Pump Rules, Brock broke down to Lisa after pulling her aside for a private conversation during a group event at her Beverly Hills mansion.

“I do have a past. I’m not proud of some things I did. But the person I am today isn’t that person I was 10 years ago. The situation between me and my ex was toxic, and yeah, there was an instance one time. And I did slap my partner. I did. I’m not proud of that,” he explained.

According to Brock, he slapped his ex when the two of them were just 19 years old.

“We had an argument and I slapped her. Following that, we moved to France. My little boy was born, we separated,” he said during a confessional. “And then we found out we were pregnant with my little girl. That led to an argument with me and her dad, and they pressed the domestic violence order on me.”

As his conversation with Lisa continued, Brock said that after he and his ex separated, she took the kids from him, and ultimately, he went to court and had the order lifted.

“When I left Australia to come on the dream to do better for my whole family, in that time of me being over here, they were with their stepdad. They had a new life and they had their lives in Australia,” Brock shared. “[They] married, they had another daughter together and I felt like, ‘Did I deserve that because I decided to make a better life for my family?’ I just feel like I’m not entitled to have these feelings because my kids are the ones that missed out on this.”