In court documents filed in Los Angeles on Tuesday amid Thomas Girardi’s bankruptcy proceedings, the firm said that after reviewing records given to them by the trustee presiding over the bankruptcy, they reportedly discovered proof that the money was transferred to Erika’s companies.

“Far from foreclosing the possibility that Erika received settlement money from the Lion Air cases, [the records] showed the opposite: Money that belonged to the surviving widows and orphans of the victims of that plane crash had, in fact, been used to make payments for Erika or her companies,” they wrote in a brief, according to a report shared by Reuters.

In response to the filing, however, Erika’s attorney, Evan Borges, fired back in an email statement, claiming he’s seen no such proof.

“I’ve never seen any evidence to support the allegation that Lion Air settlement money received by Girardi Keese was sent by GK to my client,” Borges said. And the trustee “never has alleged that Erika received Lion Air settlement money. I don’t know what Edelson is referring to, and he has conveniently redacted or blacked out his alleged references in his brief to supposed evidence.”

Attorney Ronald Richards, who appeared to be working for the trustee up until this week, also weighed in on the claims.

“They produced no evidence that showed any direct payments to Erika or her companies,” he said. “It’s all a big conjecture piled on maybes.”

During an interview, Ronald also denied making a “backdoor deal” with Erika and said he wanted the investigation of Erika to be conducted through the bankruptcies, not Edelson PC’s litigation against her, because he was concerned about whether or not the firm had a valid right to go after the RHOBH cast member.

“Edelson is seeing monsters in the closet,” Erika’s attorney added. “Edelson’s reply brief boils down to a distraction tactic to avoid having to answer for a blatantly unethical, illegal, and unenforceable fee-sharing agreement between his firm and [Girardi Keese].”

After Jay Edelson addressed the attorney on Twitter, saying Ronald was actually “terminated” from his position as an attorney for the trustee, Ronald responded to his tweet, saying he “doesn’t know what he’s talking about.”

“He doesn’t know what he’s talking about you’re off the case when the client sends a signed voluntary substitution. Which was then signed this morning. You can read the fee agreement in the case it requires it to be in writing. We’re getting kind of petty now don’t you think,” Ronald replied. 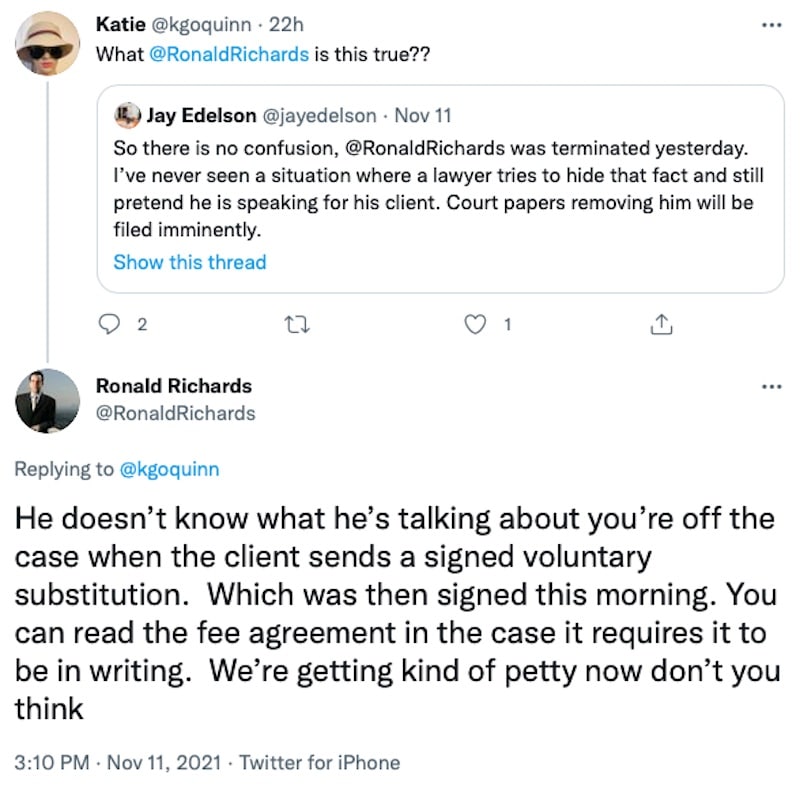 Then, after another person wanted to know if there was any documentation regarding Ronald’s exit from the case, Kimberly Archie, a former employee of Thomas’, offered just that.

While the trustee didn’t give an official reason for the replacement, Jay Edelson accused Ronald of threatening his firm in an attempt to get them to drop their embezzlement lawsuit so that the trustee could reach a settlement with Erika.

In addition to the trustee replacing Ronald on the case, Jay also confirmed the trustee is no longer opposing their ability to be able to go after Erika legally.

“Two things happened right after @RonaldRichards was fired,” tweeted Jay. “The Trustee has withdrawn her opposition to us moving forward against Erika. Second, the Trustee has agreed to let our reply be made public. This means the public can see what we found.”

Two things happened right after @RonaldRichards was fired. First, as noted below, the Trustee has withdrawn her opposition to us moving forward against Erika. Second, the Trustee has agreed to let our reply be made public. This means the public can see what we found.

Erika is currently filming the upcoming 12th season of The Real Housewives of Beverly Hills.