RHOSLC’s Jen Shah Shades Lisa Barlow for Turning on Her and Slams Meredith for Hiring a Private Investigator, Plus Applauds Heather and Jennie 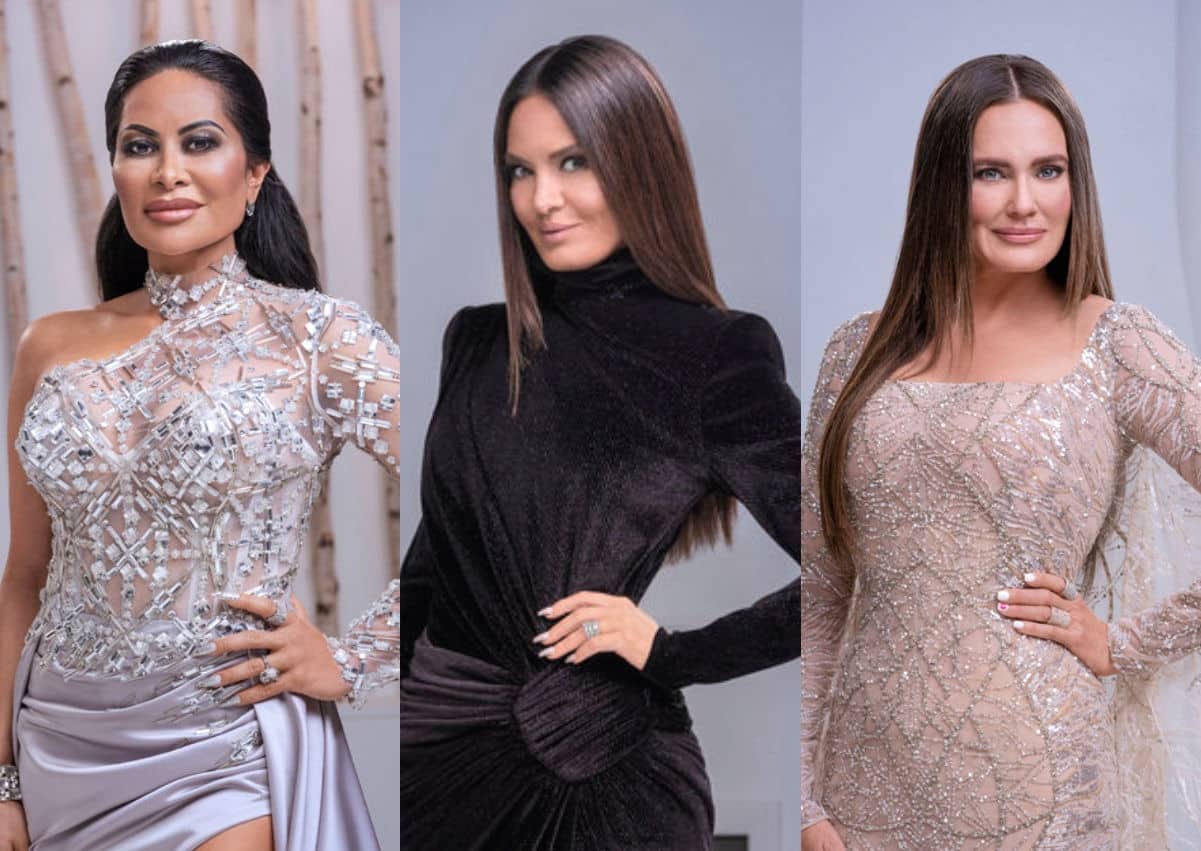 Jen Shah is speaking out against Lisa Barlow after seeing how she reacted to her shocking arrest on The Real Housewives of Salt Lake City.

In a series of posts shared to her social media accounts amid Sunday night’s episode, Jen shaded Lisa for turning on her before reacting to Meredith Marks‘ hiring of a private investigator and sharing her thoughts on the behavior of Heather Gay and Jennie Nguyen.

“The FBI / HSI shows up and I’m still the one being talked about,” Lisa tweeted on November 21.

“Because you turned faster than a burnt pancake that’s why everyone is talking about you,” Jen replied. 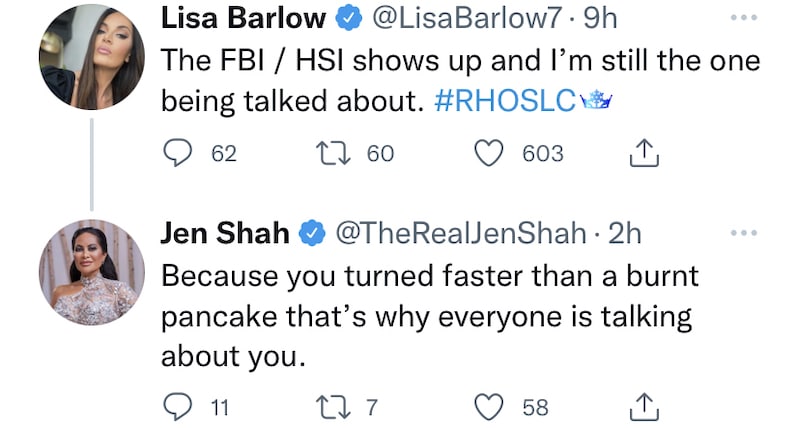 Then, when Lisa said she owed Jen “a bag of Lifesavers and Mint Milanos,” Jen told her, “Those were on me sweetie.”

“You really pulled out all the stops with your thespian performance girl,” Jen fired back, adding the hashtags #allnaturalmya–, #actressbutnotreally, and #googleit. 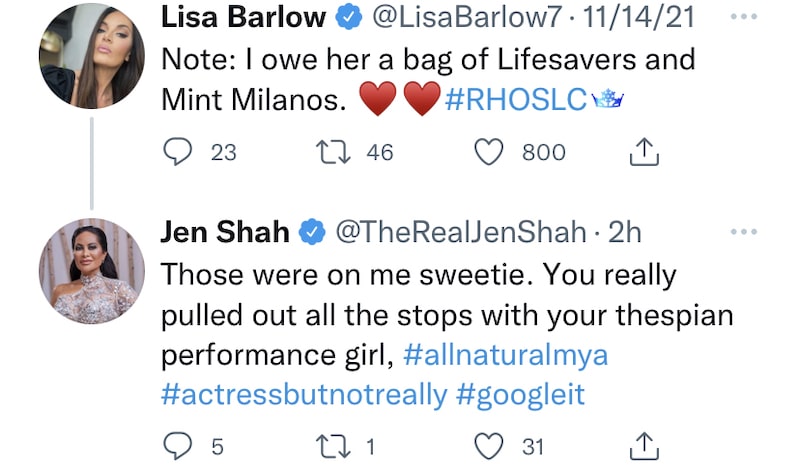 Jen also tweeted back to Lisa after seeing that she shaded the ladies of RHOSLC for discussing the alleged mental impairment of her late friend Cameron.

“Not one of these girls knew Cameron and his name should not have been brought up,” Lisa stated.

But Jen pointed out that Cameron was only featured on the show because Lisa invited him to a filmed event.

“You’re the one that brought him into this Lisa,” Jen noted.

Meanwhile, on her Instagram Story, Jen reposted a message from a fan, seemingly agreeing that Meredith’s hiring of a P.I. was an example of her “fakeness.”

“It’s funny that Meredith wants to go directly to Mary about the [rumors] her cousin is [spreading] around but when it come to [Jen Shah] she hires an investor hmmm!!” the person wrote, adding, “Fakeness at its best!” 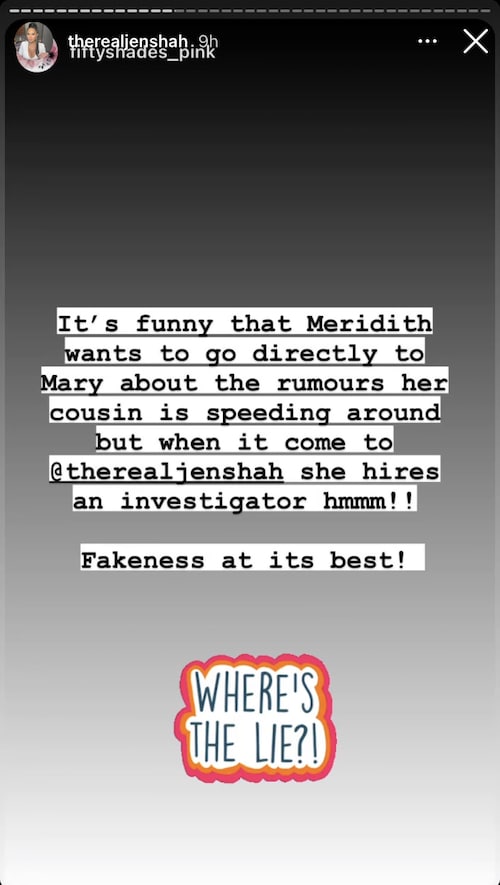 Jen also applauded Heather and Jennie for keeping it real amid the allegations against her.

“Thank you [Heather Gay] for being a friend when I needed it the most,” she wrote to Heather.

“[Jennie Nguyen] I appreciate you being a good person and not judging without any facts, proof or evidence,” Jen added in a message to Jennie, the newest member of the RHOSLC cast. 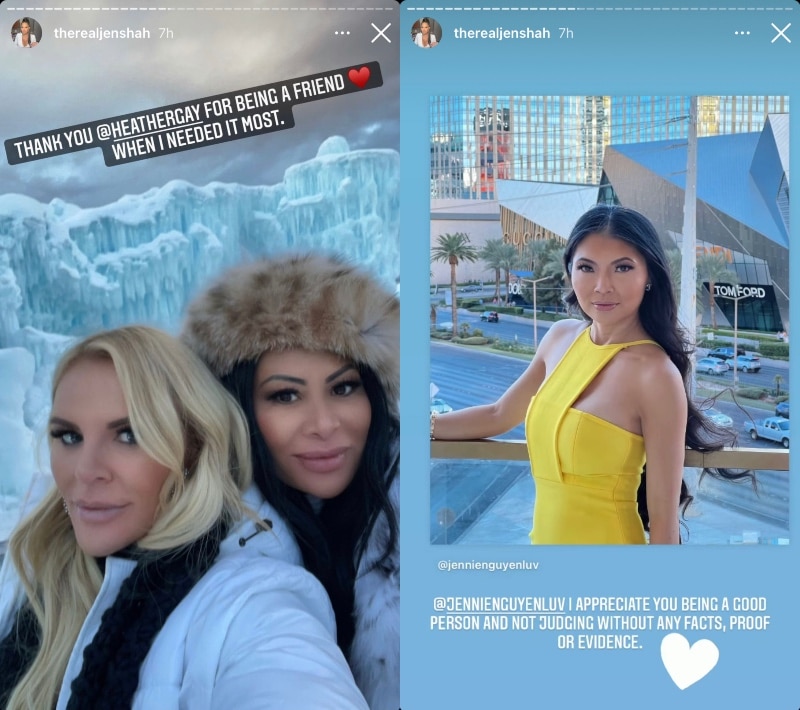