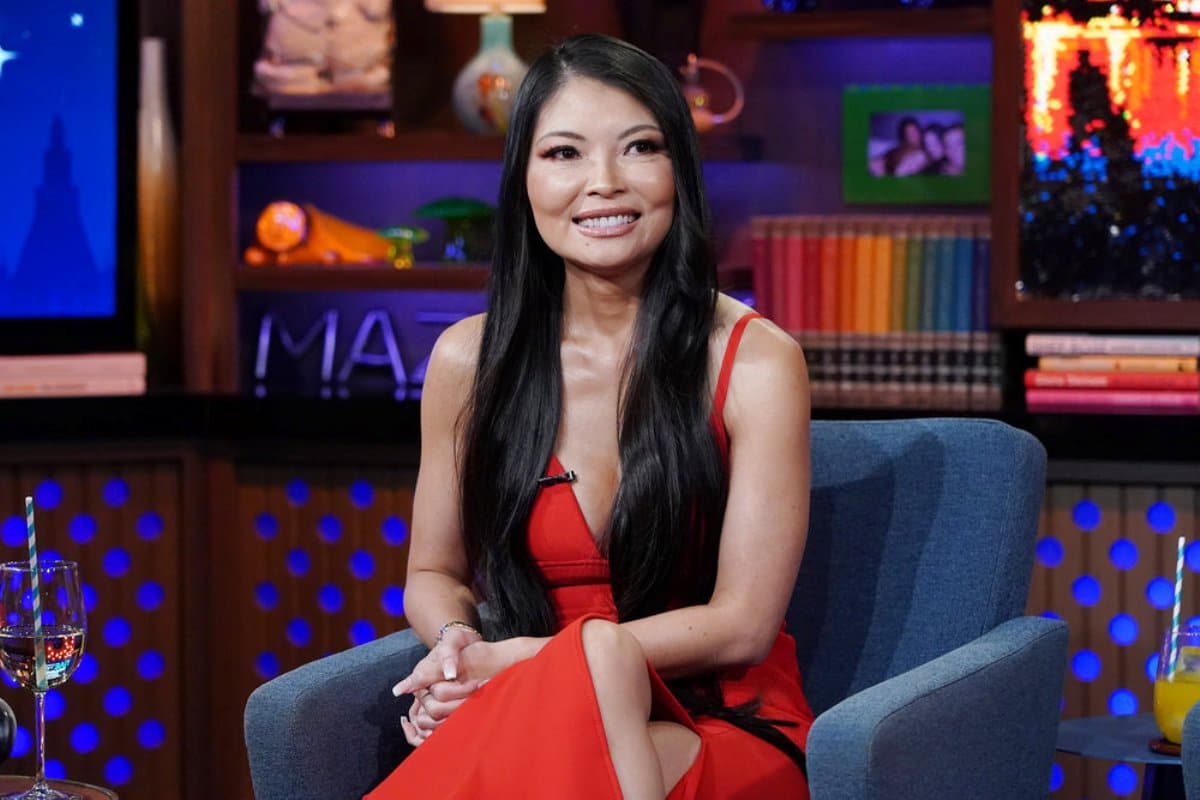 If you thought Mary Cosby‘s comments about Jennie Nguyen‘s “slanted eyes” were bad, wait until you get a load of what was just uncovered from Jennie’s personal Facebook page.

Just days after Jennie appeared on Watch What Happens Live, where she targeted Mary for making the “racial comment” toward her and slammed Heather Gay for making an “inappropriate” comparison between her and an anime character, it is Jennie who has taken center stage — and her alleged posts are far worse than anything her castmates said or did on The Real Housewives of Salt Lake City.

Jennie’s alleged posts were shared in 2020, prior to her addition to the RHOSLC cast, and several of them seemed to target the Black community.

“How many more video involving the same demographic do you need to see before you wake up?” read a caption of a video reshared by Jennie in July 2020.

In the clip, a Black child is seen seemingly bullying a Caucasian child. 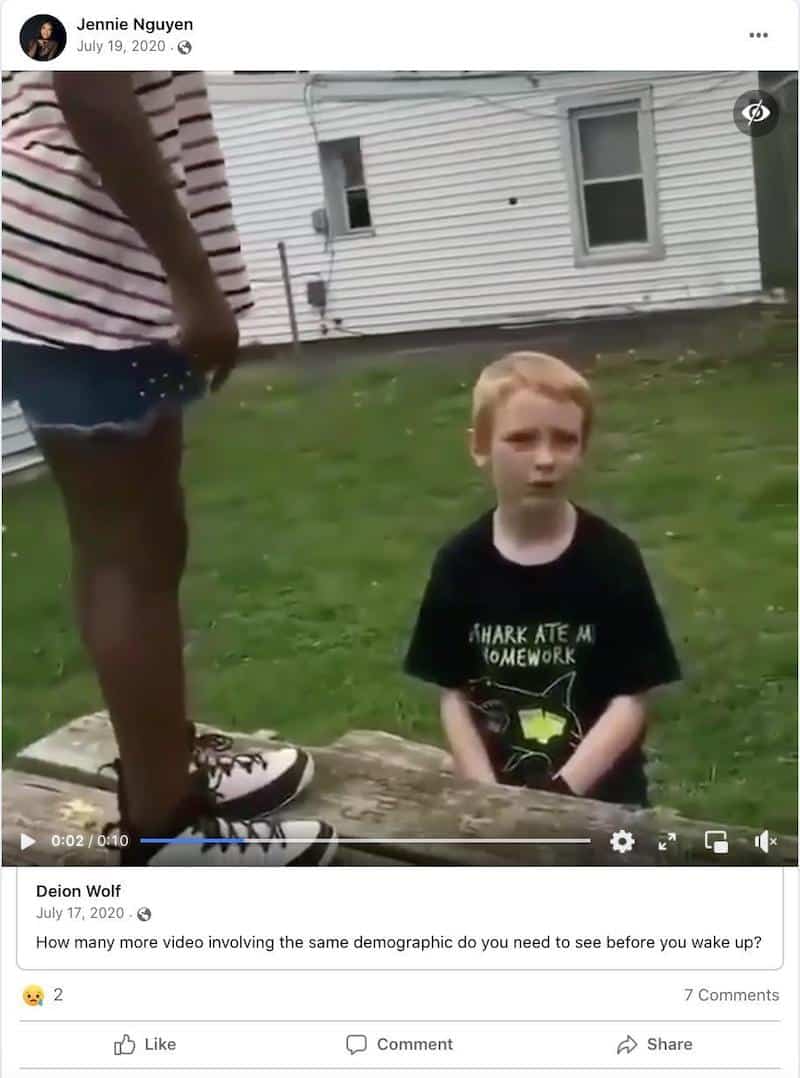 In a post the following month, Jennie allegedly used a meme to shade Colin Kaepernick, who started a movement against racial injustice and police brutality when he began taking a knee during the National Anthem at NFL games back in 2016.

“I’m kneeling to protest injustice against Black men in America!” a cartoon version of the athlete said in the post.

“That’s odd. You joined Islam, a religion that still owns black slaves, and you don’t protest against that!” reads a response written over a drawing of Charlie Brown. 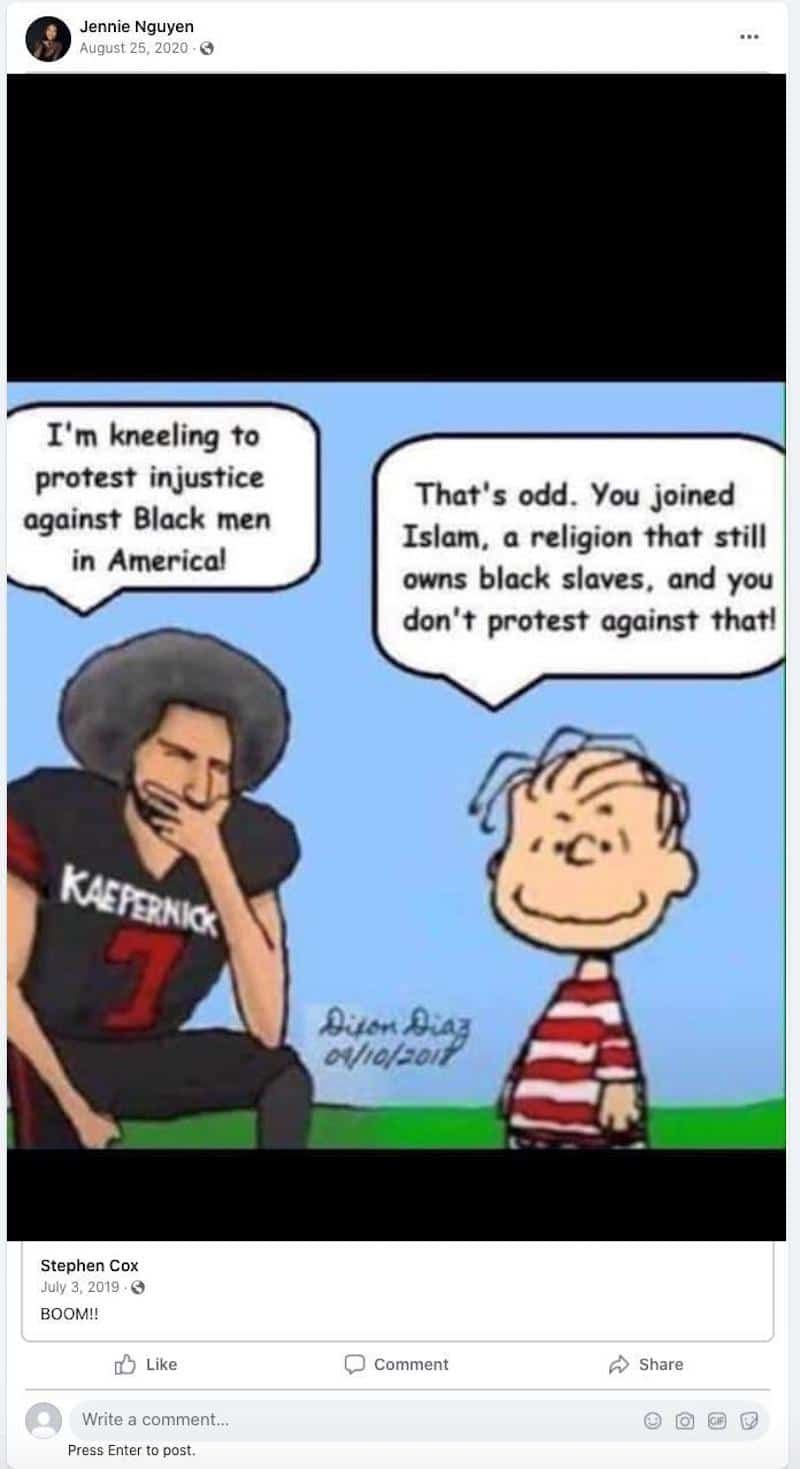 “Hundreds of Blacks shot and many killed (including children) by other Blacks every week… Over a thousand Officers violently injured, some permanently, by rioters… Anarchists rioting in major cities every night, which has caused billions of dollars of destruction to private and public property… And you still think Police Officers are the problem… You are an idiot,” read another one of her shocking, reposted memes. 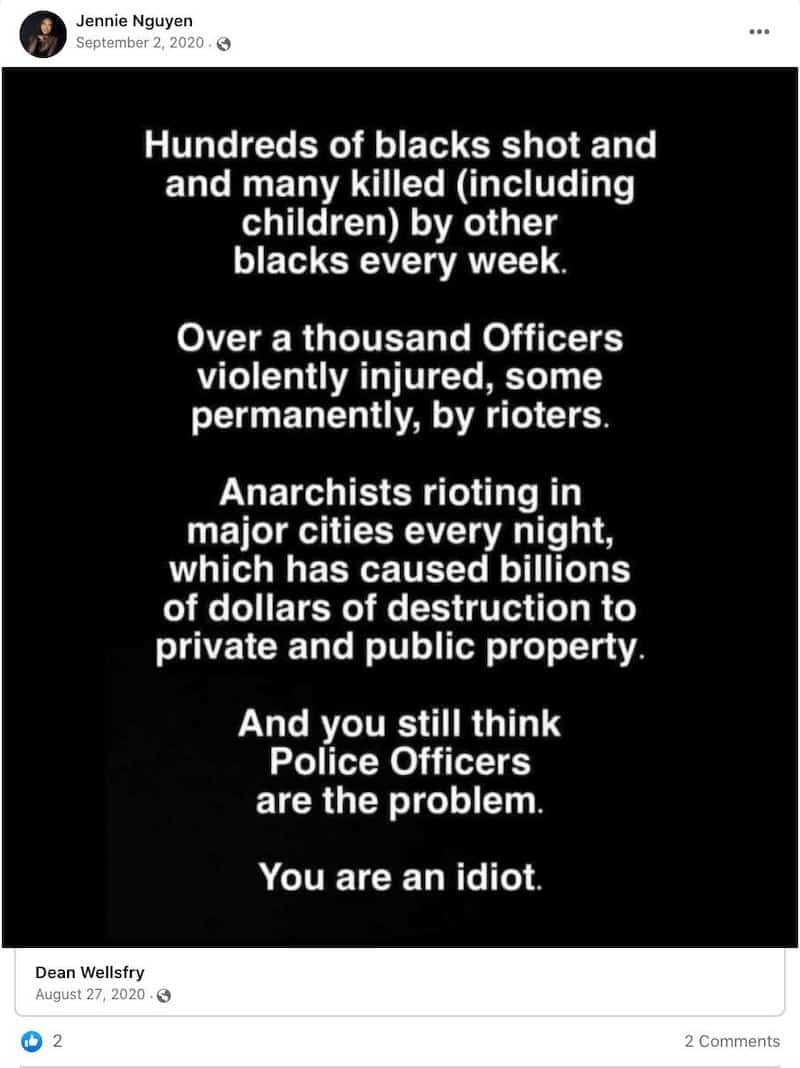 She then took things one disgusting step further and allegedly shared an article claiming George Floyd, a Black man who we all saw being cruelly murdered by a Caucasian police officer, who knelt on George’s neck as he begged for his life, didn’t die from police brutality, but rather a drug overdose. 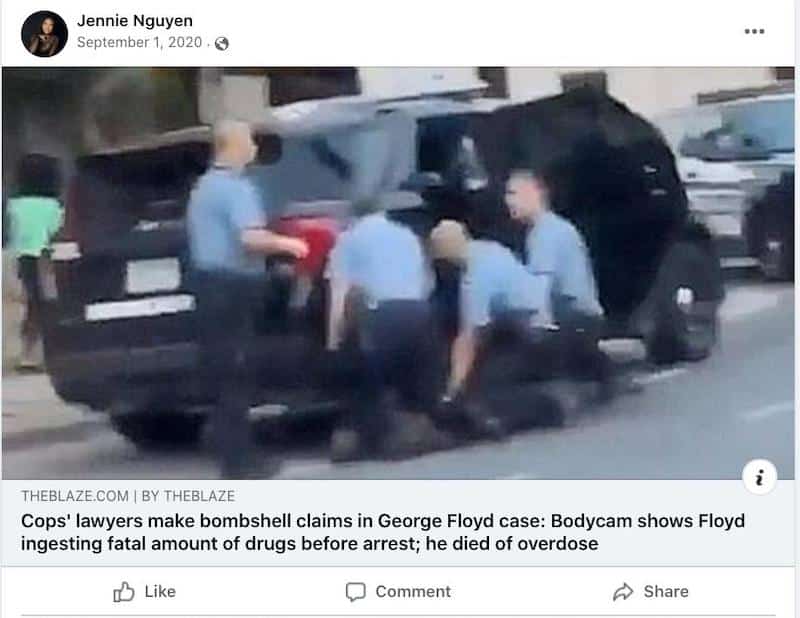 Below are several other offensive posts allegedly shared to Jennie’s personal Facebook account, including a couple of memes joking about police brutality and rioters and one that suggests the COVID-19 vaccine is bogus.

“If you follow the officers orders, you won’t get shot,” one meme read. 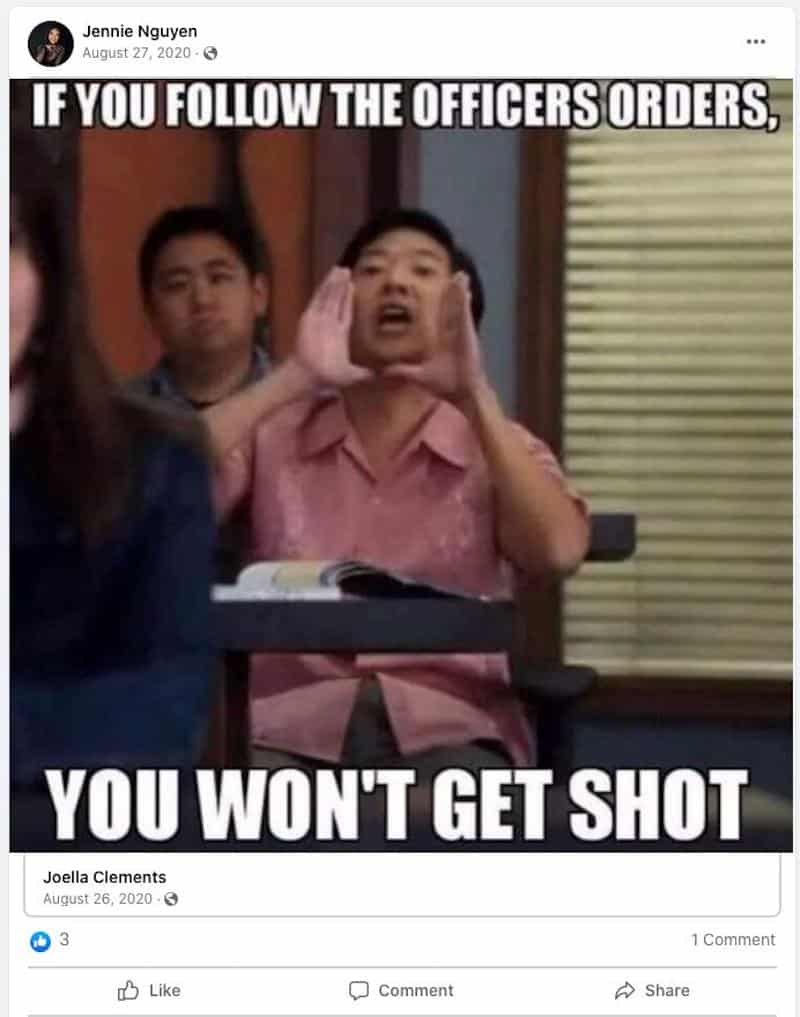 “No, that’s not my family, that’s how many rioters I’ve hit!” read another, which featured an old woman with stick figure stickers on her back windshield. 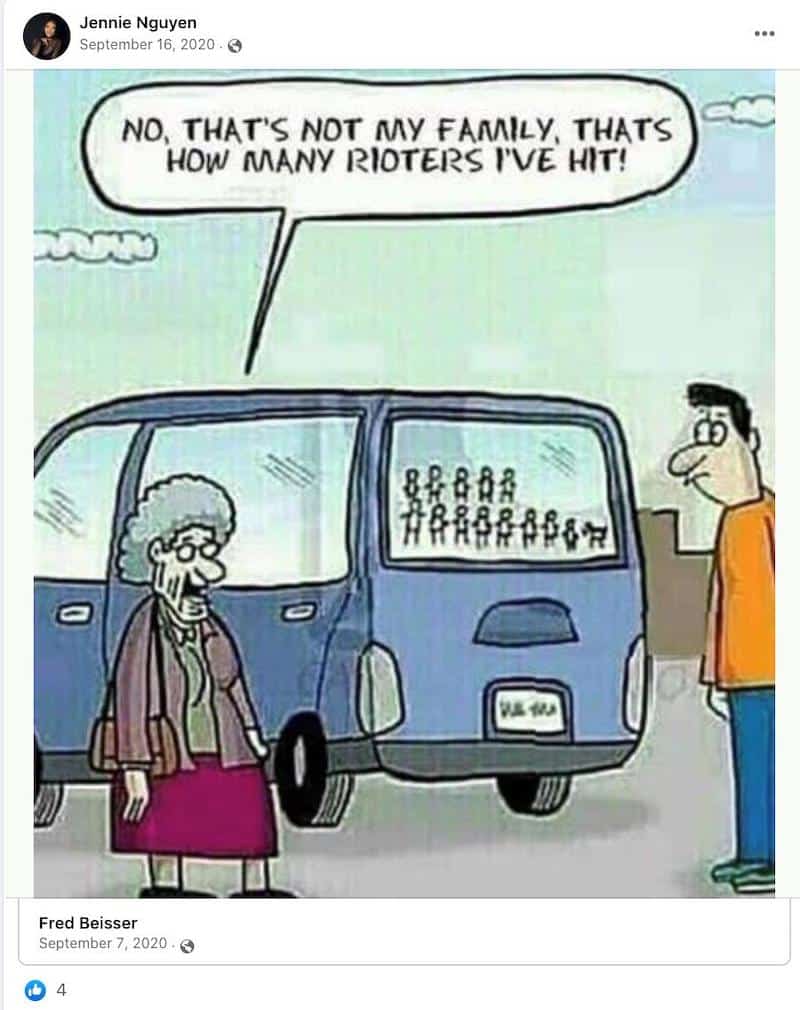 Another post targeted the COVID-19 vaccine, suggesting that it couldn’t possibly be effective.

“Can’t make a vaccine that works for influenza. No vaccine for RSV… Can’t cure cancer… But they sure as sh-t can make a vaccine in [six] months for an illness that they still don’t understand,” it said. 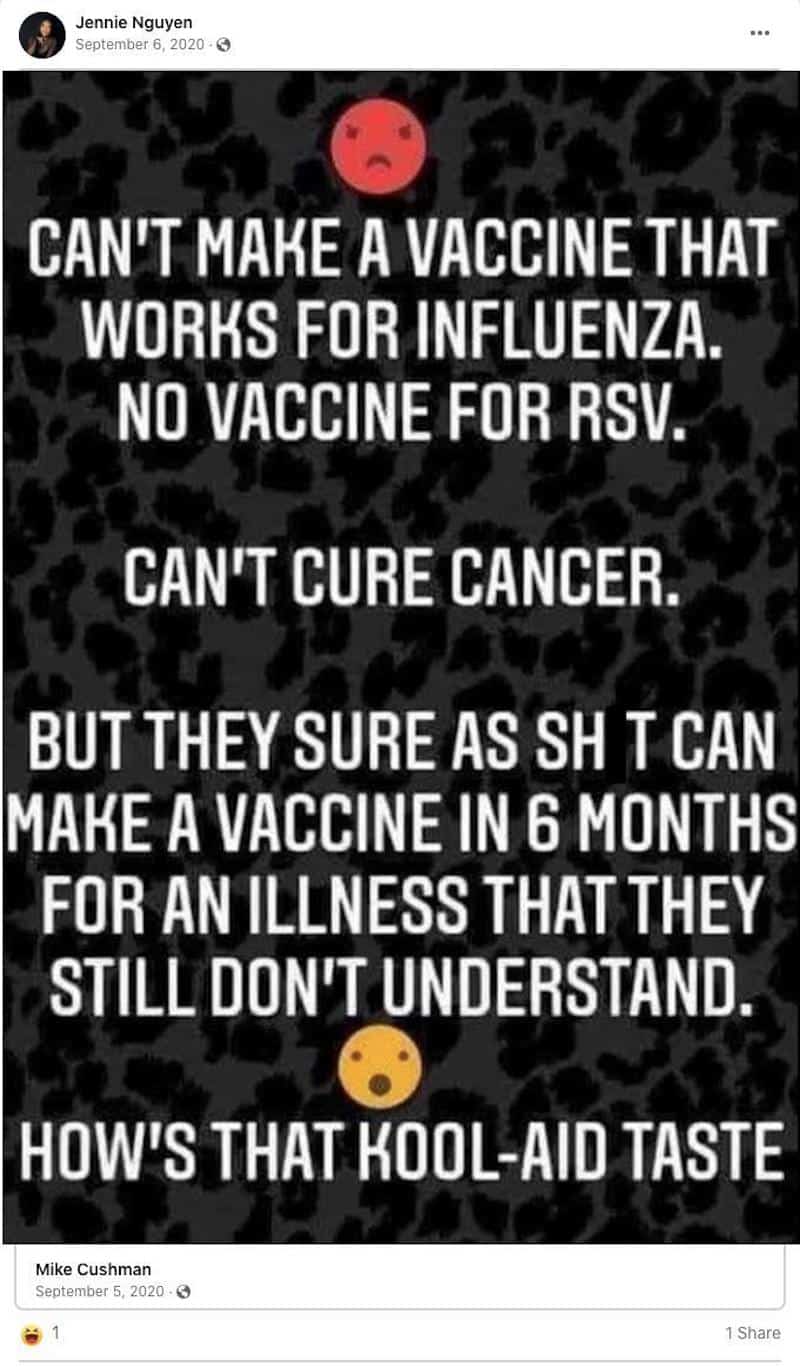 For more proof that these posts did, in fact, allegedly come from Jennie’s personal Facebook account, check out the video below.