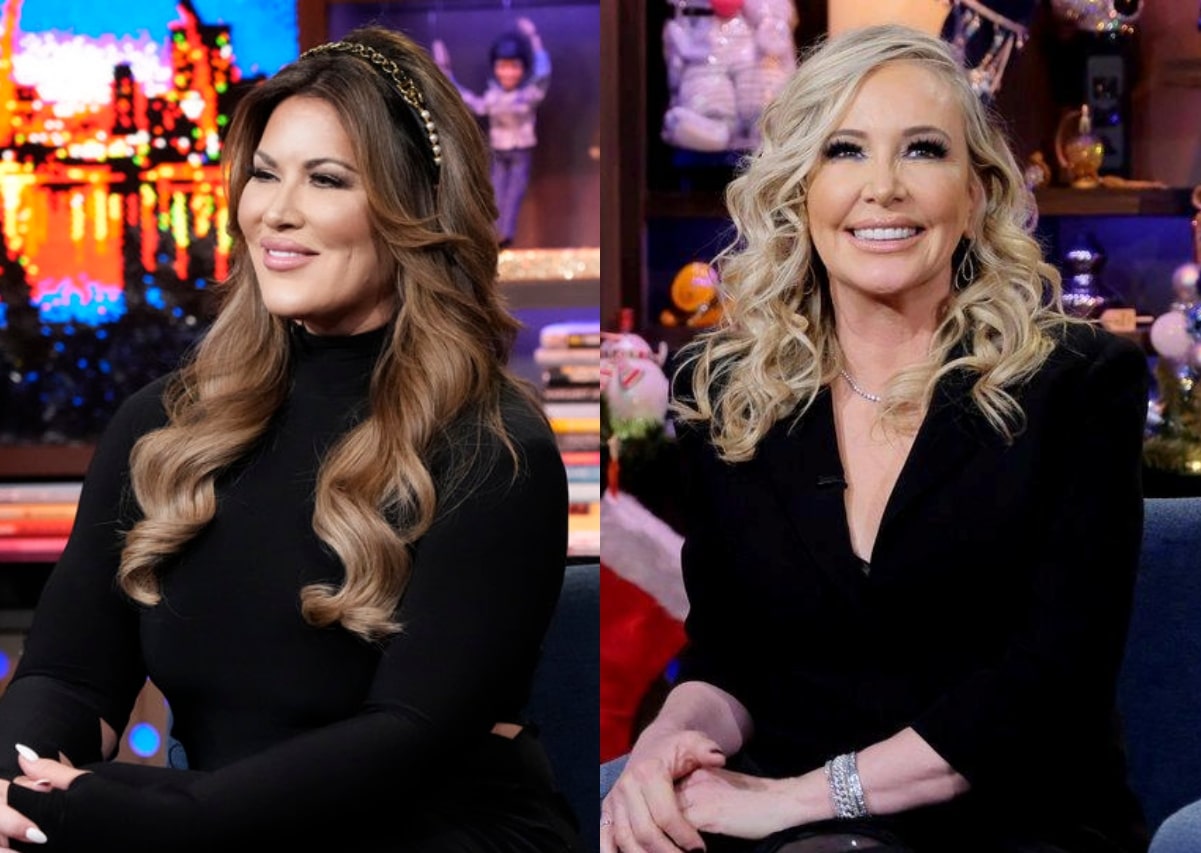 Emily Simpson appeared on Wednesday’s episode of Watch What Happens Live, where she clapped back at claims of having double standards for Shannon Beador.

Before addressing recent drama on The Real Housewives of Salt Lake City, her marriage to Shane Simpson, and the marriage issues between Dr. Jen Armstrong and Ryne Holliday, the Real Housewives of Orange County cast member was confronted by a viewer, who wanted to know why it was seemingly okay for her and Gina Kirschenheiter to talk about Shannon but not okay for Shannon to talk about them.

“She does [talk about us]. She just does it off-camera,” Emily explained on the March 9 episode of WWHL, later adding that she doesn’t keep her co-stars’ business to herself because “none of them are clients.”

“They’re not paying me so I’m going to talk sh-t all day long,” she stated after being asked why her attorney roots haven’t impacted the way she behaves on RHOC.

While another viewer suspected it was actually Emily, not Shannon (as Emily suggested), who was jealous of Gina’s friendship with Heather Dubrow, Emily insisted she wasn’t envious of their relationship.

“I totally think that’s a valid question. The thing is, Gina told me in Cabo when we were together that she and Heather were going to New York. So I knew about it long before and it really honestly didn’t bother me,” she explained, giving a nod to Gina and Heather’s trip to the East Coast. “I’m in a really good place with Gina as far as our friendship. Maybe two years ago it would’ve bothered me but it doesn’t now.”

Moving on to RHOSLC, Emily said, “no, no,” when asked if she’d represent Jen Shah in her money laundering and fraud case. Then, she addressed Heather Gay‘s journey away from her Mormon roots.

“I think that’s her truth and I think she should talk about that and she should live it and I respect it,” Emily stated. “I think Shane and I and our family have a completely different view. And that’s fine. You can do both and they’re both respectable.”

After watching RHOC season 16, many fans took note of the happier vibes between Emily and Shane, and one of those viewers called into WWHL to ask about what led to the positive change.

“I think it was a lot of things. First of all, I was miserable before I got my hip replaced. And so that was huge. And he passed the bar… That was a huge weight off our relationship and now I feel we can be free and fun together and not have all that pressure on us,” Emily revealed. “And I’m not such a b-tch anymore because I got a new hip.”

As Emily and Shane grew closure, Dr. Jen and Ryne grew further apart, which was quite evident during their dinner with Heather.

“I found it entertaining but I felt a little badly too, for both of them. I mean, he looked uncomfortable,” Emily said of the scene, in which Dr. Jen became extremely intoxicated.

Later, during the WWHL: After Show, Emily confirmed Noella Bergener made no effort to quit talking about her divorce from James Bergener after she called her out for doing so but admitted she, as an attorney, was “interested” in Noella’s split at first.

“I was interested in it. I just felt like it consumed the room and other people had things going on as well. I felt like we need to allot time to other people,” she noted.

As for the counseling session Dr. Jen went to and Ryne skipped, Emily admitted she understands why Ryne didn’t attend.

“I understand his position because I feel like he reminds me of Shane in the past when Shane wasn’t comfortable filming and talking about things. I don’t think he’s comfortable and I don’t think it’s that he’s a bad husband. I think he just doesn’t want to talk about these things with millions of people watching. And I respect that because I went through it with Shane,” she said.

As for her feud with Nicole James earlier this season, Emily admitted she had a problem with erupting quickly.