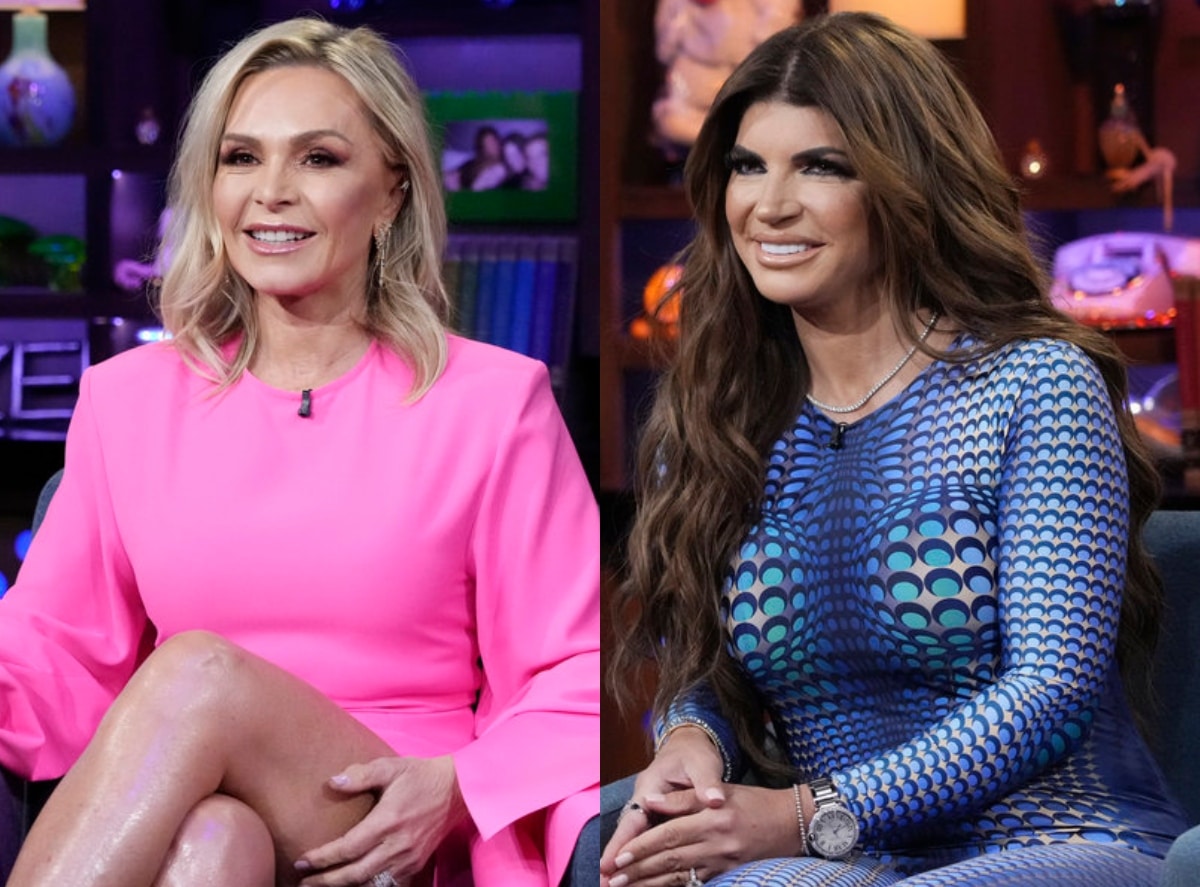 Tamra Judge had a lot to say about The Real Housewives of New Jersey reunion on a recent episode of her and Teddi Mellencamp‘s podcast.

After watching Teresa Giudice feud with Melissa Gorga and her husband, Joe Gorga, over her decision to leave Melissa out of her upcoming wedding to Luis Ruelas, the Real Housewives of Orange County star reacted to Teresa’s suggestion that Melissa was being a bad sister-in-law for including her as a bridesmaid in her wedding to Joe when she was pregnant.

“I had to rewind that,” Tamra admitted on Two T’s in a Pod.

In addition to Teresa claiming Melissa should’ve waited for her to give birth before getting married, she confirmed she would be including Luis’ sisters in her bridal party instead of Melissa.

“His sisters… It’s bizarre to me,” Tamra noted. “And then for her to say, ‘I was in your wedding, yes, but I was pregnant,’ like they should have pushed back the wedding, I’m like, ‘You are a selfish person, you really are by making that comment.’ It’s not about you, Teresa. It was about your brother and your sister-in-law that day.”

Then, after pointing out that Melissa wasn’t the only person Teresa snubbed, giving a nod to Dolores Catania not getting an invite to Teresa and Luis’ December 2021 engagement party, Tamra was met with a comment from Teddi, who suggested Dolores failed to react to the diss because of the ramifications she might experience for doing so.

“Dolores has to [act like she’s okay with snub] because the alternative is just going to be freakin’ brutal,” Teddi noted.

Looking back at the fighting of the RHONJ reunion, Tamra said, “Holy sh-tballs,” and she noted the drama as “a lot.”

“There was so much screaming… I couldn’t imagine how [Andy Cohen]… how he reacts. It was too much, too much talking all at once,” Tamra recalled.

Meanwhile, Teddi noted that Andy’s admiration was clear, especially in comparison to his feelings towards Jennifer Aydin.

“You can tell that Teresa’s been a housewife for a long time and how much love Andy has for her because he gives her so much grace compared to like, how you would see him maybe talk to… a [Noella Bergener],” she shared. “You can tell he likes Teresa. I don’t think he loves Jen.”

According to Tamra, she didn’t like Jennifer’s behavior at the reunion.

“Jen, just for the record, you’re only as good as this week’s episode,” she told the RHONJ star. “She kept butting in. She tried to be confrontational about everything and it reminded me of [Emily Simpson].”

As rumors continue to swirl in regard to the upcoming 13th season of RHONJ, Tamra and Teddi suggested that Teresa may not be good for the show moving forward.

“That’s not good… If you have a cast member on the show that everybody’s afraid of. If you can’t be yourself, like, I don’t think Melissa can be herself. I don’t feel like Dolores can be herself because they’re afraid of Teresa,” Tamra said.

“We’re at the reunion now. You’ve witnessed your behavior. How are you doubling down?” Teddi wondered.

The Real Housewives of New Jersey season 12 reunion concludes with part three on Tuesday, May 17, at 8/7c on Bravo.