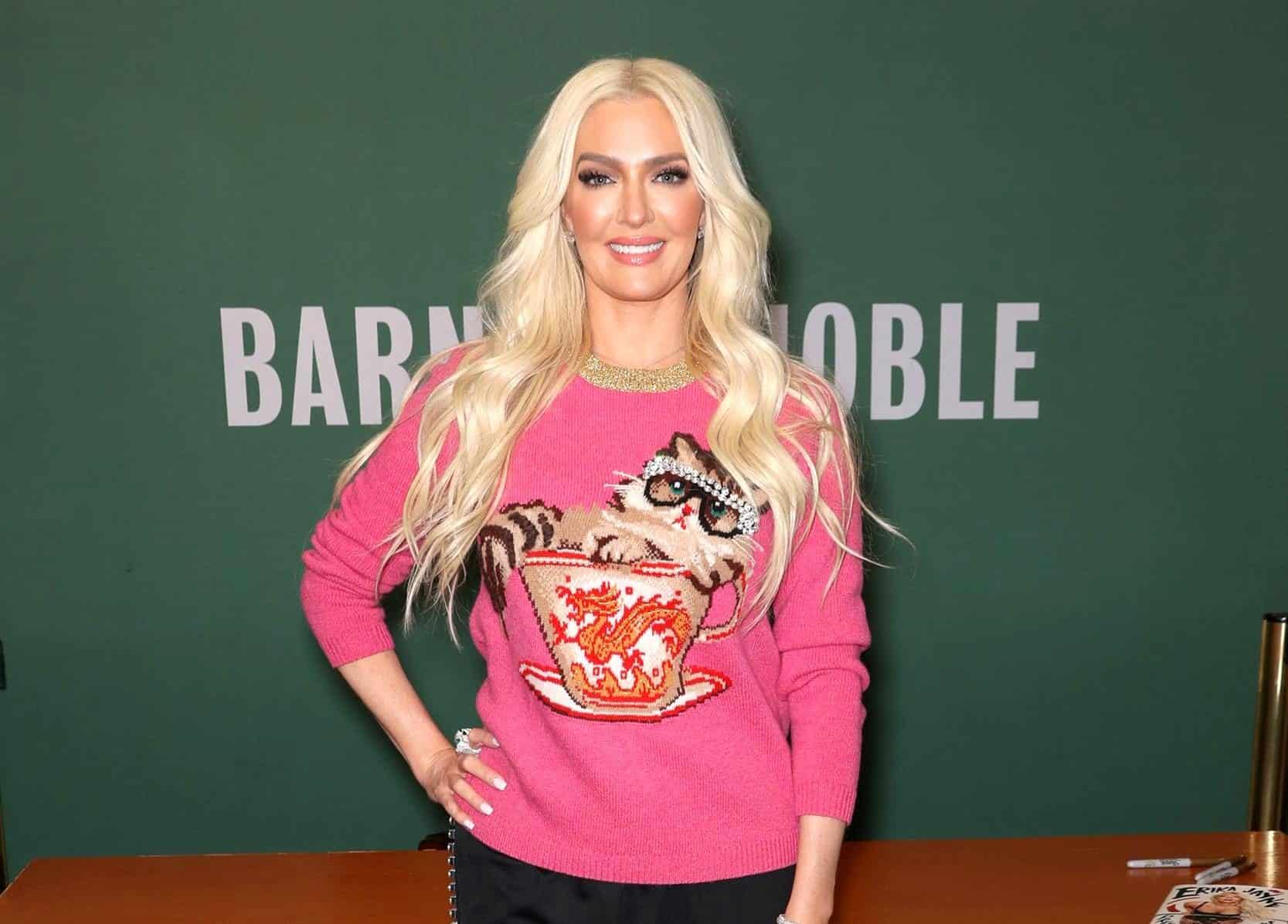 According to a couple of new updates, the Real Housewives of Beverly Hills cast member has informed a judge that she is currently in settlements discussions as her former marital home in Pasadena, whose price was recently dropped for the umpteenth time, nears foreclosure.

“Breaking: [Erika Jayne] indicates to Judge Russell she is actively engaged in settlement discussions to resolve the $25,000,000 fraudulent conveyance claim originally filed by our office,” attorney Ronald Richards confirmed on Twitter on June 27. “She is asking to push back tomorrow’s status conference.”

“Start by releasing the earrings EJ!” he added, giving a nod to the $750,000 diamond earrings Thomas bought his now-estranged wife as a gift. 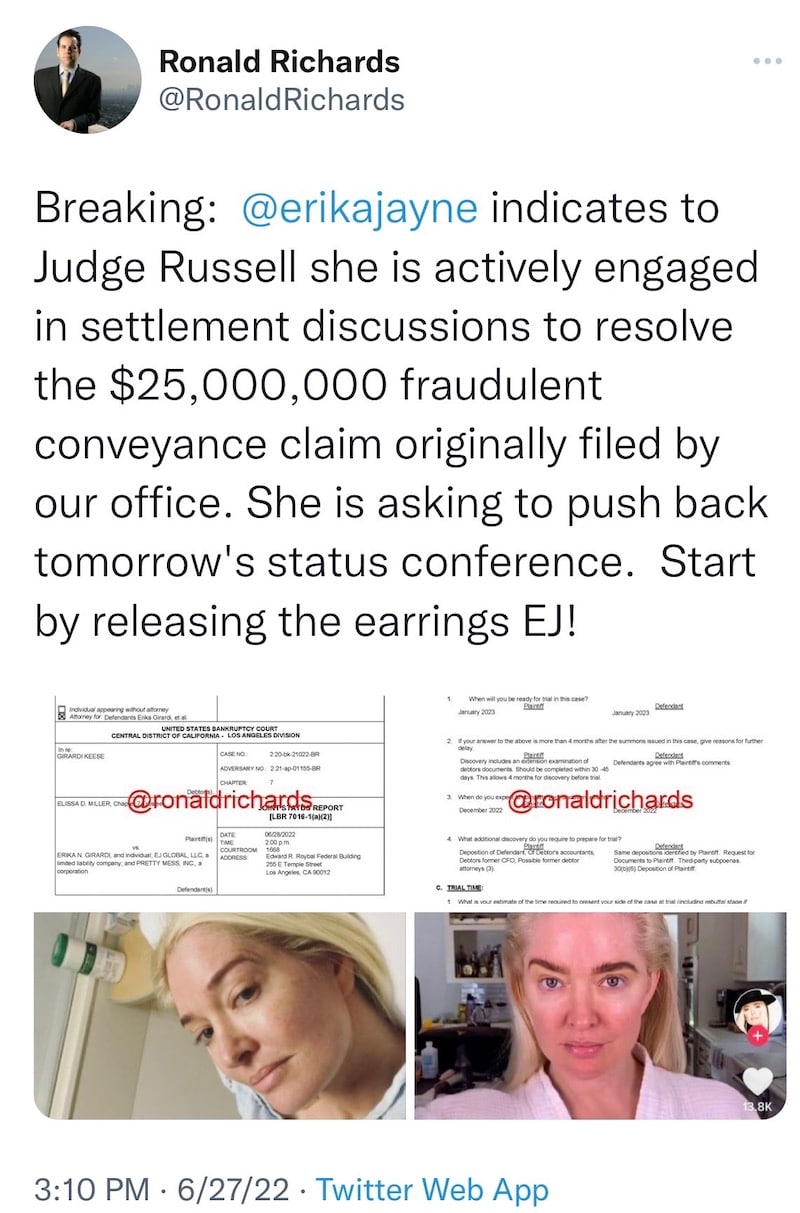 Although Erika has not yet released the earrings, they have been given to a third party, who is expected to hold them as they are appraised.

“Breaking: Jason Rund, the Thomas Girardi trustee, is trying to resolve the foreclosure motion with the second on the house. This stipulation will move back the hearing,” he revealed at the end of last week. 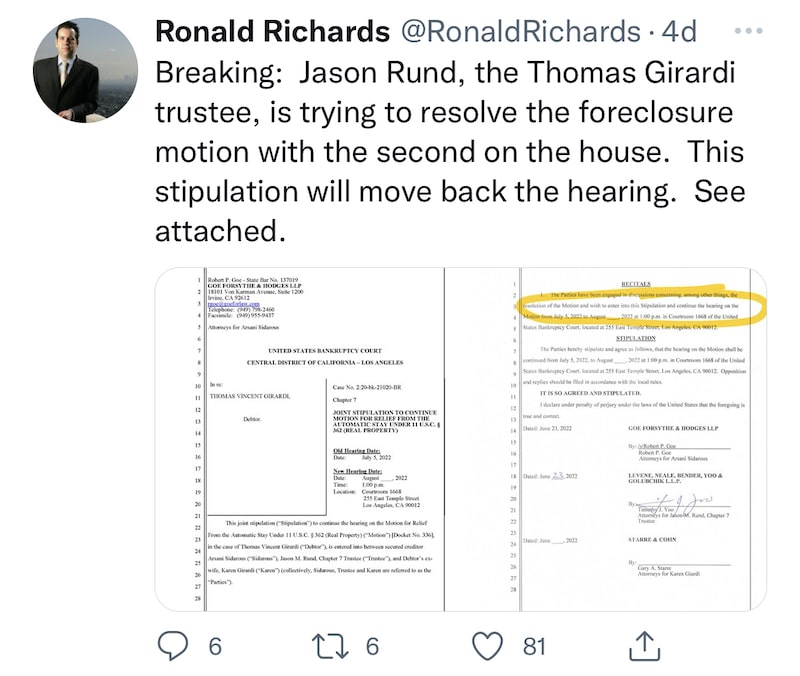 In the attached documents, it was noted that in addition to the trustee, a couple of other parties were named as creditors, including Thomas’ first ex-wife, Karen Girardi, and a man named Arsani Sidarous, who is owed $3.2 million by the once-famed attorney.

As RHOBH fans may recall, Karen filed documents against Thomas’ estate weeks ago, claiming her ex-spouse owes her $245,000 in alimony and noting that her lifetime support had been past due for two years.

When Erika and Thomas’ former home was first put on the market, it was listed for $13 million. Now, as of June 26, the price has been slashed to $7.5 million.