As the recently-disbarred attorney, who was forced into bankruptcy in December 2020, along with his now-defunct firm, Girardi Keese, faces liens worth over $6 million, Karen has filed documents against him as the Pasadena home he once shared with estranged wife Erika Jayne, of The Real Housewives of Beverly Hills, nears foreclosure.

“In a surprise development, Karen Girardi, Tom Girardi’s first wife files papers for the relief brought by the second lender. She discloses that she is owed $10k per month and her bill is now $245k. This brings just the secured liens to $6,070,000. Debt service is $40k per month!” attorney Ronald Richards tweeted on June 10.

Then, in a second Twitter post, the attorney wrote, “Here is Karen’s motion which she lays out the lifetime support that has been in arrears for 24 months. The debt service on this property has to be $40k per month approximately. The minimum take out number is around $6,600,000 to cover commissions / fees.” 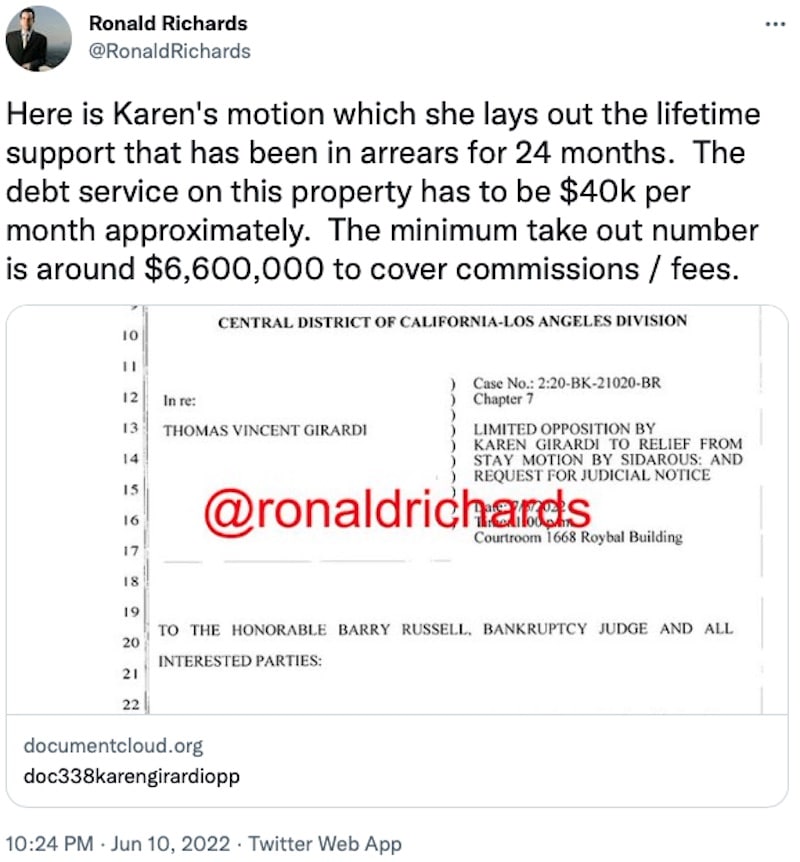 In other Thomas Girardi news, one of his creditors has filed a motion to have his and Erika’s former Pasadena mansion sold at auction.

According to court documents obtained by Radar Online, Arsani Sidarous, who is owed $3.2 million, wants the court to sell off the four-bedroom, nine-bathroom 10,277-square-foot home at auction following a number of price cuts.

As RHOBH fans will recall, a trustee was appointed to take control of his assets, unload them, and repay his many lenders, creditors, and former clients, who he’s accused of stealing millions from in settlements.

In the request for foreclosure, it was noted that the mansion has a total of $23 million in liens filed against it.

A judge has yet to decide whether or not to move forward.