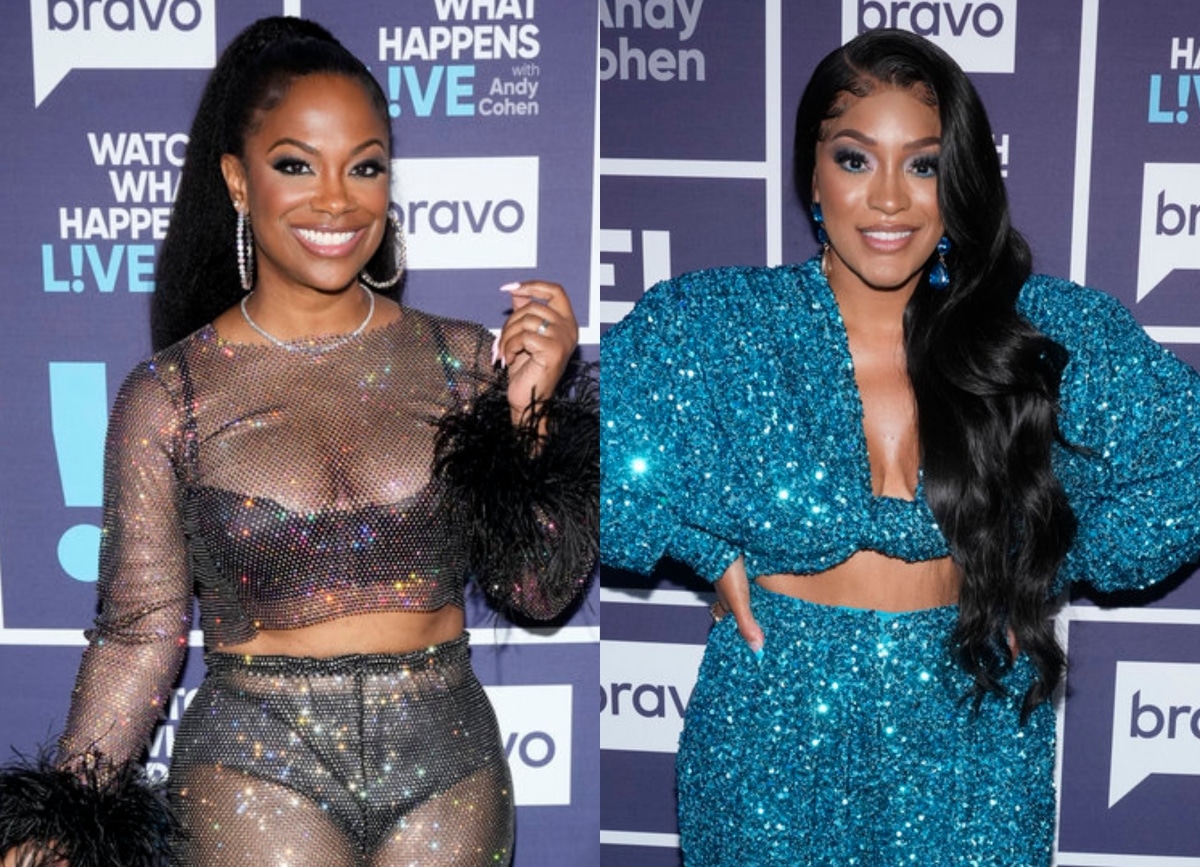 Kandi Burruss appeared on Sunday night’s Watch What Happens Live, where she called out her Real Housewives of Atlanta castmate, Drew Sidora, for pre-planning the dog bone toss fans witnessed on the latest episode of the Bravo reality series.

After Drew barked at Fatum Alford, slamming her as Sheree Whitfield‘s lapdog and throwing her a dog bone, Kandi revealed what viewers didn’t see. Then, she said that Drew “loves a prop,” shaded Sheree for failing to pay workers, and reacted to Marlo Hampton suggesting she dates below her tax bracket.

“That wasn’t the only dog bone that she threw. That’s the only one that ya’ll got to see,” Kandi noted on the July 24 episode of WWHL. “She had a whole bag of dog bones.”

“She loves a prop,” Kandi continued. “My thing was, I’m like, ‘Girl, you mean to tell me you packed doggie bones from Atlanta, to bring them all the way on this trip? You had this whole scene pre-planned.’”

In addition to the “drama with Drew,” Kenya Moore and Marlo continued their feud. However, as Kandi confirmed, “Marlo did not put her hands on Kenya.”

“It never got physical. It was a little extra, a little bit dramatic. But Kenya’s point was, ‘I’m being friendly. I came here like you said. I brought my bags. I’m gonna stay in the house, like you said, why do we have to have a separate conversation because our conversations always go left. So we shouldn’t have to have a separate conversation in this room because I don’t wanna do that. I already know where it’s gonna go,'” Kandi explained. “So I understood what the problem was but I just was like, ‘Okay, y’all are being so extra.’”

Throughout the early moments of the season, Marlo and Sheree were seen making and discussing a number of allegations about Kandi and Kenya. But during an episode of WWHL last week, Sheree suggested Kandi shouldn’t be upset about Marlo calling her a “hoe” because she’s heard the comment before.

In response, Kandi turned the tables, explaining, “It’s the same as her getting upset about people saying she’s broke and she don’t pay her bills. People been saying it but she still get upset if people say it.”

Later, during the RHOA: After Show, Kandi was asked how she felt about Sheree explaining that she doesn’t pay workers if she doesn’t like their work.

“Well my thing is, what was the agreement? What did you guys put in place? Did y’all have a written agreement?” Kandi wondered. “You can’t just have somebody do the work and then just decide you’re not gonna pay them.”

“I don’t like it because it doesn’t take away from the fact that they still put in work to get it done. And it’s all about the fact of did they actually put in a quality of work and you just didn’t like the style of it? Because sometimes, you can’t just say, ‘I’m not gonna pay you,’ just because you didn’t like the way that it came out even though they put in hours,” Kandi continued.

She then added that Sheree has frequently been accused of not paying workers and suggested that Sheree may be saying that she doesn’t like certain work so that she can get out of paying.

“Sometimes people just say they don’t want to pay cuz they just don’t wanna pay and they wanna find a reason not to like it so they don’t have to pay,” she explained.

As for Marlo saying that Kandi dates below her tax bracket, Kandi pointed out that she and husband Todd Tucker have been together for 10 years.

“I’ve not been with another man since the day I met him. So all that stuff she wants to talk about in the past, that’s so far behind me I don’t even remember them. I’m like, ‘Girl, you need to be talking bout who you dating.’ We never get to see them,” she stated.

Meanwhile, Todd added, “That tax bracket’s a little different.” He added that he looks at Marlo like a “little sister,” which didn’t come as good news to Kandi.

“For what?” she exclaimed. “See that’s why… I got annoyed when he forgave her. Y’all haven’t seen that part yet but it was annoying to me because I was like, ‘We’re done.’ And he was cool to let her slide with some of the comments she made and I just felt like it was very disrespectful.”

According to Kandi, she was “really, really hot” about the issue because Todd has “looked out for Marlo before.”

Also on WWHL, Kandi looked back on the cast’s extended stay in the driveway, where they experienced drama as they prepared to go on a gem-mining day trip.

“We sat in that driveway for hours. I was like, ’This is ridiculous. I’m about to go in the house,'” she recalled.