Home Real Housewives Of Salt Lake City News More Details on How Jen Shah Scammed “Elderly, Vulnerable Victims” Out of Savings as Fans Call for RHOSLC Season 4, Is Her Bravo Salary in Jeopardy?

More Details on How Jen Shah Scammed “Elderly, Vulnerable Victims” Out of Savings as Fans Call for RHOSLC Season 4, Is Her Bravo Salary in Jeopardy? 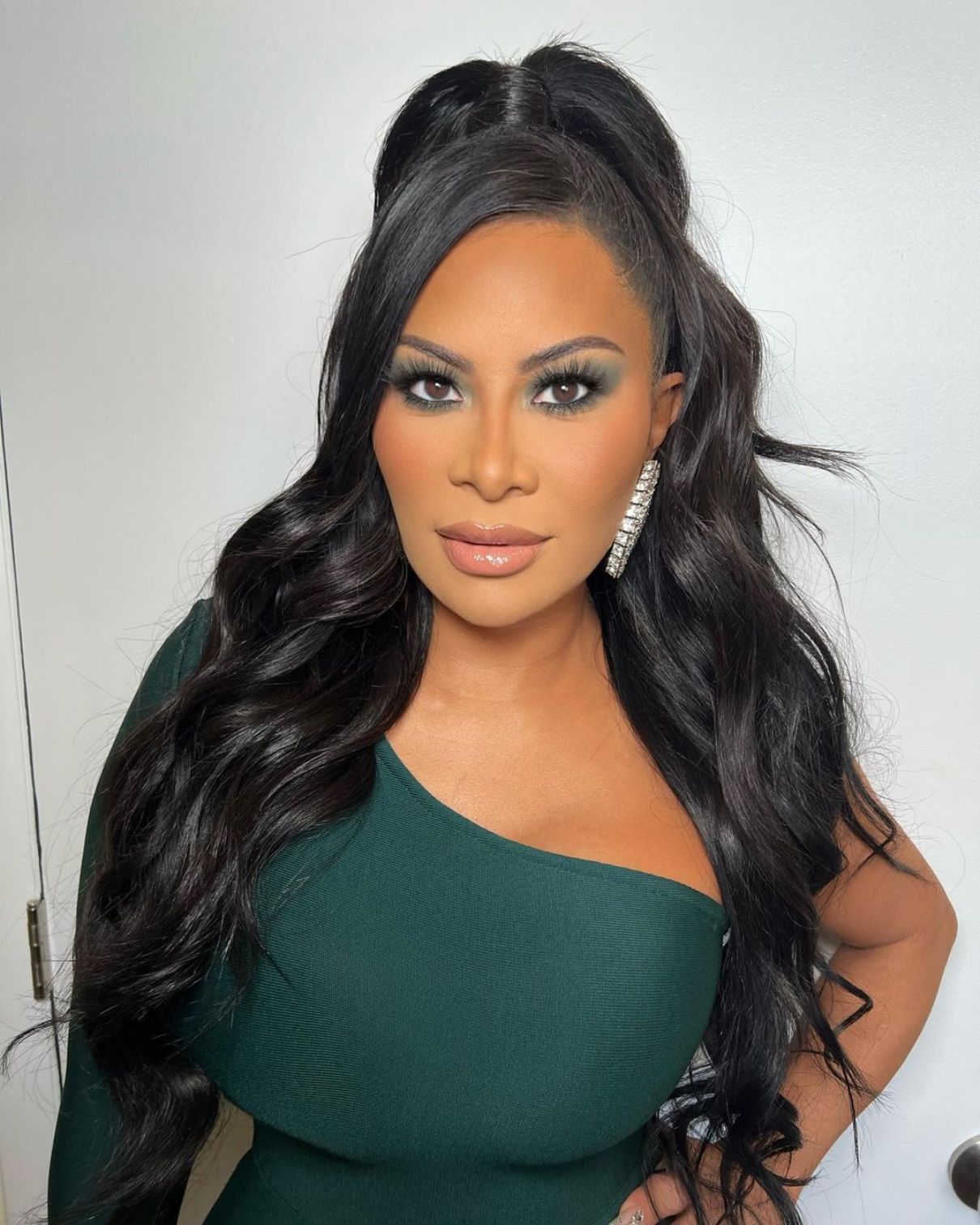 Following Jen Shah‘s guilty plea earlier this month, details of her fraud crimes are being revealed.

In a press release, the Real Housewives of Salt Lake City cast member is accused of setting up elderly victims to be defrauded out of their savings by selling them as leads as part of a large-scale telemarketing scheme she previously denied having anything to do with.

“Jennifer Shah was a key participant in a nationwide scheme that targeted elderly, vulnerable victims. These victims were sold false promises of financial security but instead Shah and her co-conspirators defrauded them out of their savings and left them with nothing to show for it. The Office is committed to rooting out the schemes whatever form they take,” Damian Williams, the U.S. Attorney for the Southern District of New York, said in the release.

Jen reportedly defrauded “hundreds of victims” between 2012 and March 2021, many of whom were over the age of 55.

“Shah, among other things, sold leads to other Participants for use by their telemarketing sales floors with the knowledge that the individuals they had identified as ‘leads’ would be defrauded by other Participants, including by lying to Victims about how much they would earn after purchasing the business services and the purported success of others who had purchased services. SHAH received as profit a share of the fraudulent revenue per the terms of their agreement with those Participants,” the press release continued.

And while committing these crimes, the RHOSLC cast member attempted to conceal her role by “[incorporating] her business entities using third parties’ names.”

“As part of her guilty plea, [Jen] agreed to forfeit $6.5 million and to pay restitution up to $9.5 million,” the release also noted.

Due to the immense drama surrounding Jen and her ongoing case, fans are begging Bravo to start production on season four early. Although cameras were rolling when Jen arrived at court on Monday, the footage is expected to be part of season three, which technically wrapped earlier this year.

In a series of screenshots shared by Housewives of SLC on Instagram, a number of fans spoke out.

“Hi, [Bravo], can y’all start filming [RHOSLC] season four while season three is airing so we can cover the whole Jen Shah of it all,” one person wrote, in part.

“Jen Shah is set to be sentenced on November 28th, 2022, which most likely will be halfway through [RHOSLC] season [three] airing. I wonder if they’re gonna start filming season [four] soon,” said another.

A third added, “The fact [RHOSLC] can still shoot a [fourth] season between now and November… kinda iconic.” 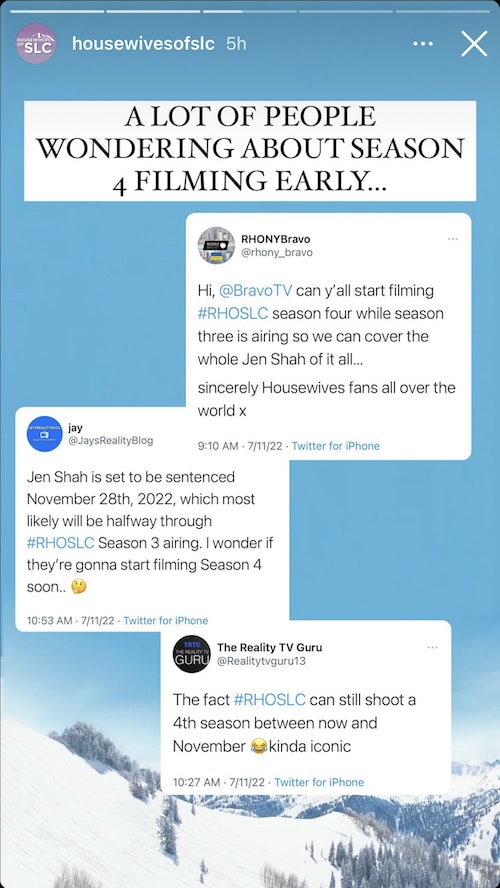 As Jen prepares for her November 28 sentencing hearing, in which she faces up to 14 years in prison, she is allegedly in jeopardy of having not only her assets and Bravo paycheck taken by the government, but also having the income of her husband, Sharrieff Shah, who works as a special teams coordinator and cornerbacks coach at the University of Utah, confiscated.

“Here is the forfeiture order just entered. Jen Shah has to immediately pay this judgment and if she doesn’t, the [government] can conduct discovery as to her remaining assets, [and] garnish her wages RHOSLC,” attorney Ronald Richards explained on Twitter. “This includes any community property with Coach Shah. Where is the Shah Squad w/ $?” 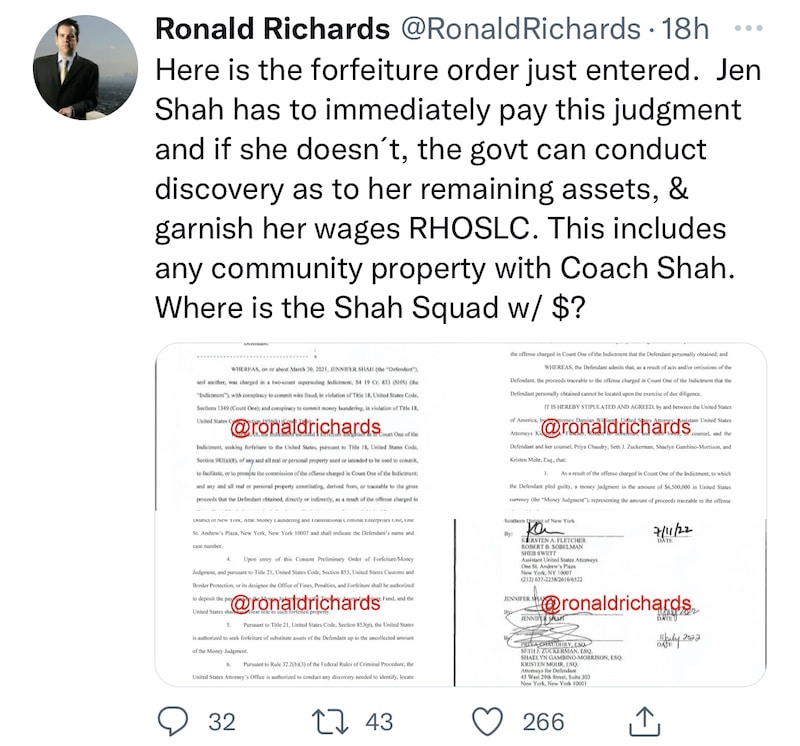 As Reality Blurb previously revealed on Sharrieff Shah’s salary, he makes a reported $450,000 annually. And with bonuses and other benefits, he brought in a total of $553,215.17 for the 2020 school year.