RHOBH’s Erika Jayne and Dorit Kemsley React to Lisa Lashing Out at Sutton, Claim WWHL Comments Were Made to Defend Garcelle as Sutton Claims Lisa “Hates” Her, Plus Live Viewing 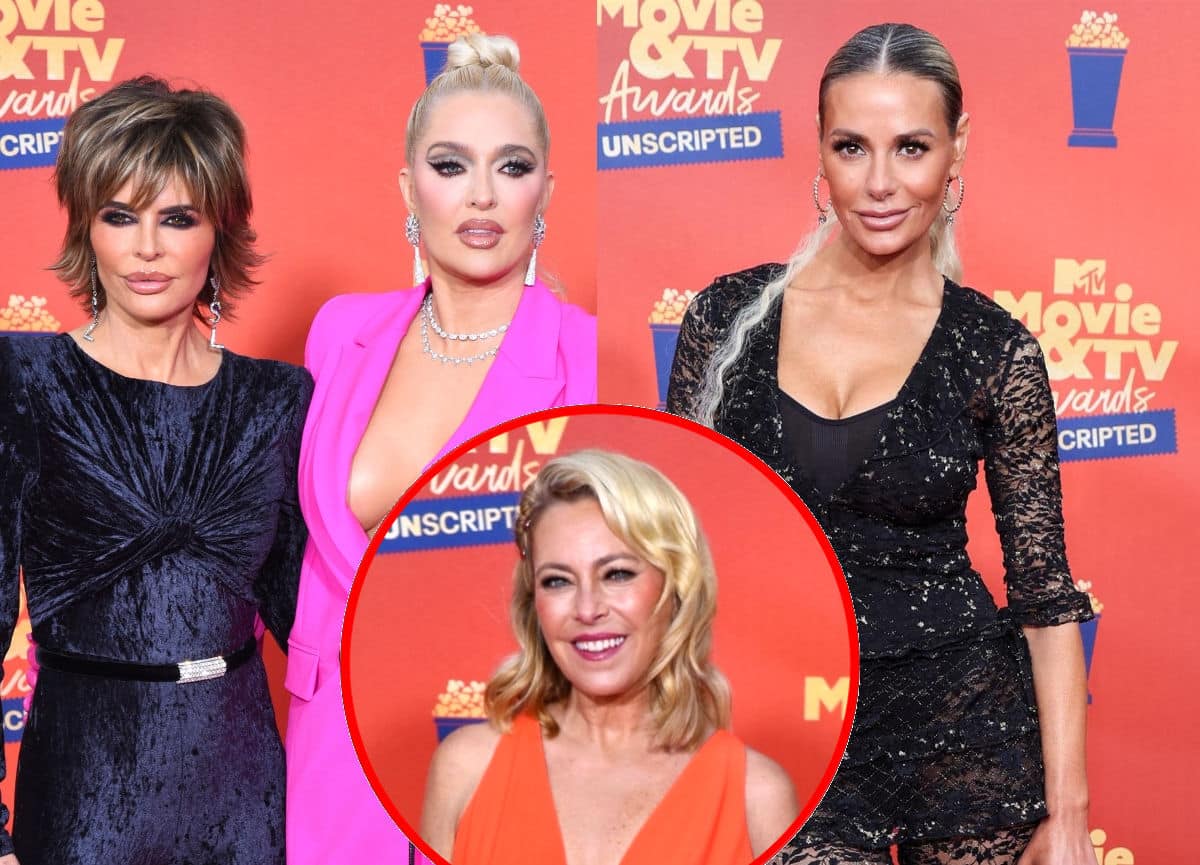 Erika Jayne, Dorit Kemsley, and Sutton Stracke are reacting to the drama that went down between Sutton and Lisa Rinna at Lisa’s rosé party, which was featured on the latest episode of The Real Housewives of Beverly Hills.

After watching as Lisa told Sutton, “F-ck you,” threatened to “f-cking cut [her] down,” and kicked her out of her home, Erika and Dorit expressed shock over the encounter as Sutton opened up about her “very interesting friendship” with Lisa, stating that despite their pleasant one-on-ones, her co-star actually “hates” her.

“I just remember Lisa telling Sutton to get the f-ck out of her house and she didn’t. I’ve never seen anybody get thrown out but didn’t leave. I was like ‘Why is she here? I have no idea?’” Erika recalled on the August 3 episode of the RHOBH: After Show.

“I was shocked. It was shocking,” Dorit agreed.

“I’m not gonna leave. Come on lady,” she said. “When I’m with Lisa one-on-one, it’s one thing. And then all the sudden she’s coming at me.”

After suggesting Lisa acts differently with her than she does with the rest of the RHOBH cast, Sutton said her castmate simply can’t put an end to the drama surrounding their feud over the Elton John Foundation Gala tickets Sutton claimed to have paid for.

“I keep apologizing. I felt like at that lunch, she really was earnest in her forgiveness. I don’t want to hurt somebody. I want her to understand that and I’m wondering how long I have to apologize before she actually accepts the apology,” Sutton said.

As RHOBH fans will recall, Sutton claimed to have paid for Lisa and her husband, Harry Hamlin, to attend the gala years ago. On an episode of Watch What Happens Live, she added that she had never gotten a “thank you” — despite Lisa seemingly proving that she and Harry were actually guests of IMDb.

“Lisa and I have a very interesting friendship. Basically, I think I’m friends with her and she hates me,” Sutton continued.

But according to Erika, Lisa wanted just one thing from Sutton: For her to admit that her WWHL comments were made “to defend [Garcelle Beauvais]” after Lisa said that Harry hadn’t gotten a second “thank you” from her after gifting her a jar of his pasta sauce.

“[And] she wouldn’t do it. And Lisa’s not the one that ratchets down. As a matter of fact, she ratchets up. If you resist her when she knows, forget it,” Erika stated.

“You know Lisa is the truth seeker so she knew. [And] that is the reason Sutton did it. It’s just so obvious,” Dorit noted. “And it is frustrating, to be honest. If I was in that position, when you want to get somewhere with someone and you want to move past, I have to believe that their apology is authentic. If someone cannot actually admit to something, put all your cards out on the table, have it out, both be honest and then you can move forward. And Sutton wasn’t doing it and it was very difficult for Lisa to let it go.”