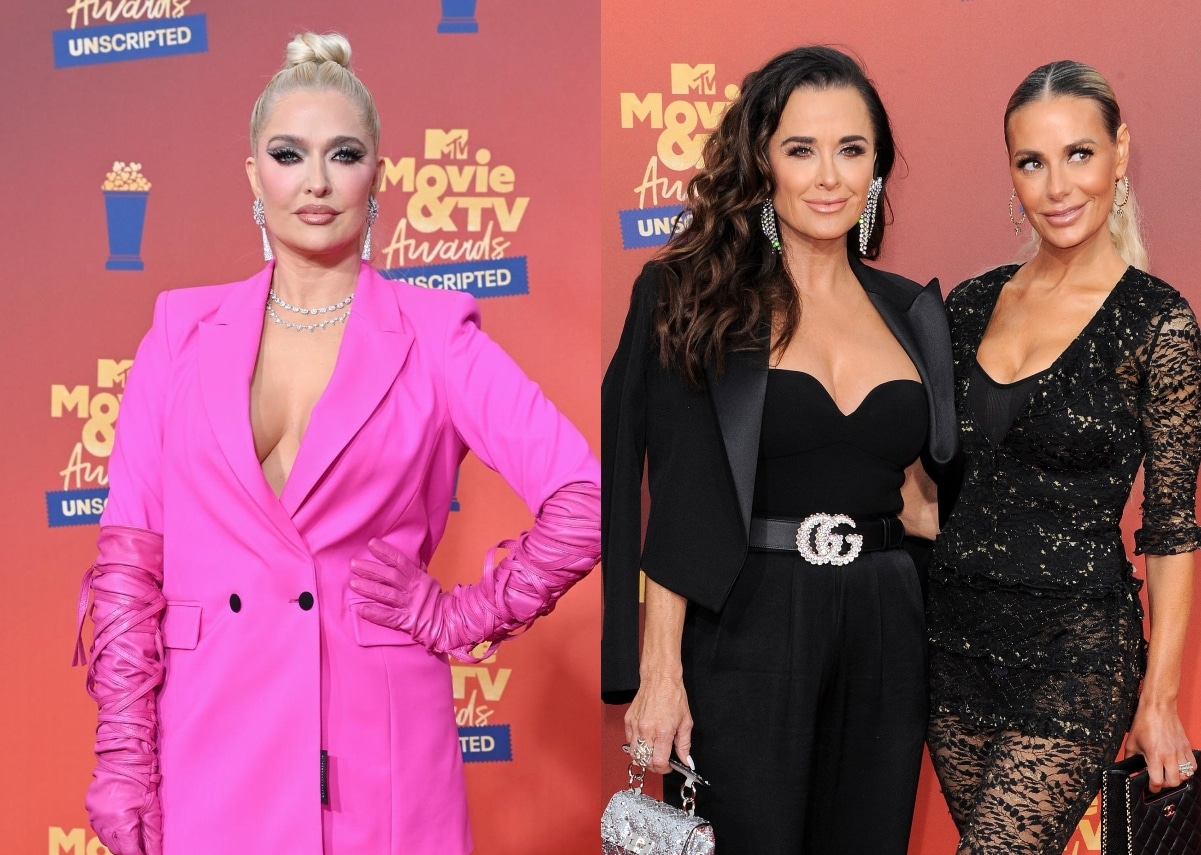 Erika Jayne doesn’t believe Kyle Richards treated Dorit Kemsley fairly as her co-star comforted her after her dramatic encounter with their Real Housewives of Beverly Hills castmates in Aspen.

After watching as Kyle screamed at Dorit for skipping her shopping event at Kemo Sabe to remain with Erika in Diana Jenkins‘ hotel room, Erika shaded Kyle for failing to be “fair” with Dorit, who had so kindly stayed with her after a very emotional evening with the other women.

“We even told [Dorit] to go. We’re like, ‘Go be with them. We know that they are expecting you.’ [But Dorit] called and they were mad at [her],” Erika revealed on the September 14 episode of the RHOBH: After Show. “[Dorit] ended up paying the price for being there for me during this process of, like, horrible sh-t. And it just, it didn’t strike me as fair. Like, come on Kyle.”

According to Dorit, she didn’t feel right leaving Erika at a time when she was so upset.

“[Erika] had spent the entire night crying and in pain, and the next day she didn’t want to go to this event that Kyle had put up with the hats. At that point, I didn’t feel right or comfortable leaving Erika,” Dorit recalled.

But when she called Kyle, Kyle didn’t want to hear it.

Although Dorit felt she was doing what was best for Erika at the time, noting that Erika needed her support at that moment, Kyle was disappointed in her decision.

“I was so excited, and I wanted to get the girls all something, and for them all not to show up, just because Erika was mad at me, was upsetting,” Kyle noted. “It threw off the whole dynamic. It’s like, all of the sudden, there was barely anybody there after I made this big effort and it really hurt my feelings a lot.“

“I thought it was very selfish of them,” she added.

And Kyle was further “insulted” by the fact that Erika left her home and failed to speak with her after their spat the previous night.

“I was insulted also, because I thought we’re good enough friends that we could’ve sat here in the morning, had coffee, and talked through this and worked it out. But she didn’t want to give that opportunity,” Kyle stated. “I feel like in this group that we can get upset with each other and we can get mad but at least with me, that we can always work through it, and she didn’t even want to give that opportunity.”

“My friend Kyle is yelling at me, she’s not understanding the place that I’m coming from, and I don’t feel welcome. I’m out,” Erika declared.

Luckily, despite Kyle not understanding her pain, Dorit did.

“I understand where Erika was coming from by not feeling comfortable going back to Kyle’s after she just had an altercation. I probably would’ve done the same exact thing,” Dorit admitted. “You are going now, after a night like that, you want to feel comfortable. You want to be in your bed. Diana, in that moment, had said, ‘Listen, I have a bedroom,’ and just like she did with me, it was a very welcoming idea that made Erika feel comfortable.”

Although Erika felt comfortable, she was still quite emotional, saying she “cried like a baby” throughout the night as Dorit noted that she could see Erika had been crying “all night long” when she went to check on her the next morning.

“You can have your buttons pressed, and at some point, you just explode, but she’s in real pain and she was in tears, and she was really, really, I don’t want to say inconsolable because luckily she let me sit on the edge of the bed, and I had to get a box of tissues,” Dorit recalled.

“I appreciated [Dorit] being there because [she knows] me and [she] also [knows] what I’ve been through,” Erika said in response. “And there’s only so much I can say and I can’t continuously go to fight every night without feeling something.”