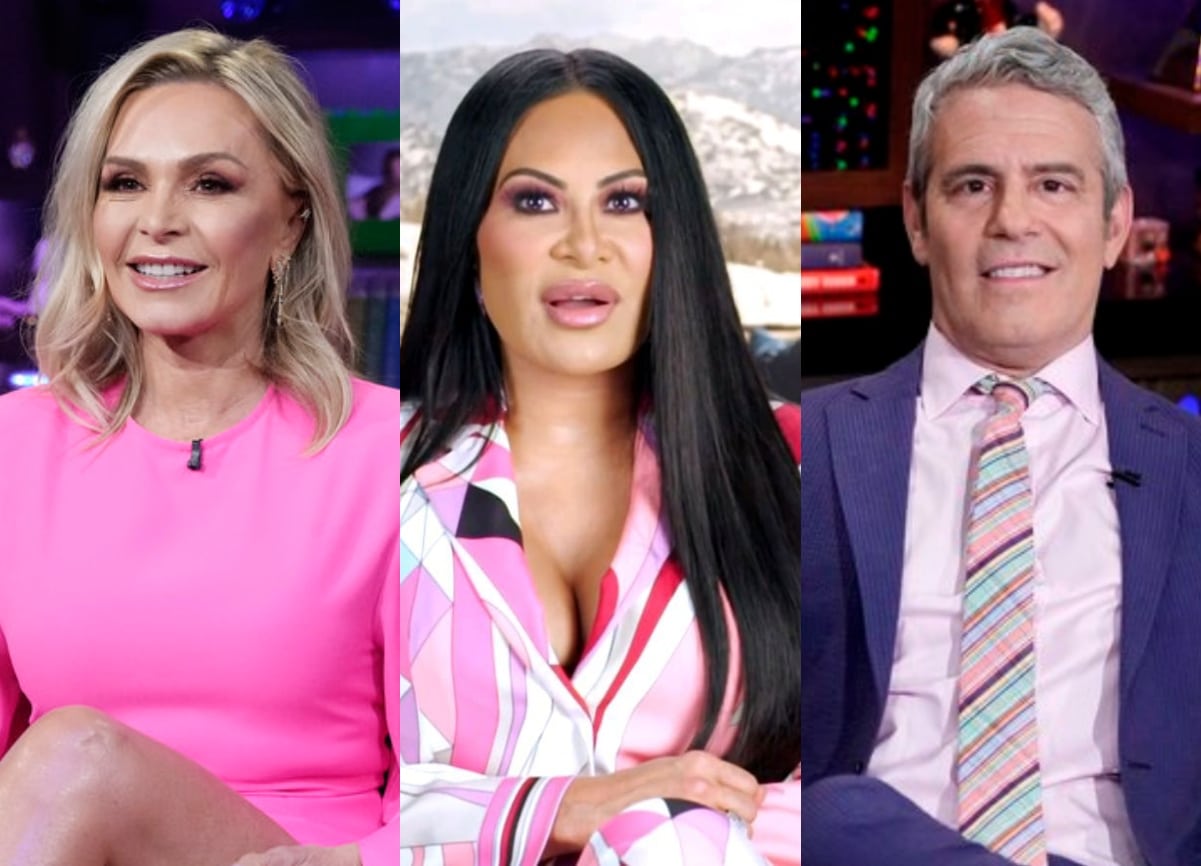 Tamra Judge looked back on her experiences with Jen Shah at BravoCon on a recent episode of her shared podcast with Teddi Mellencamp.

After the Real Housewives of Salt Lake City cast member publicly declared on Twitter that she did not crash BravoCon, claiming she was actually “paid” for the event, the Real Housewives of Orange County star accused Jen of confronting Andy Cohen at a party and took aim at Jill Zarin, who leaked the news of her RHOC return over the summer for profit.

On the October 19 episode of Two Ts in a Pod, Tamra said Jen surprised her by wandering into her glam room as they were getting ready to attend the events of BravoCon last weekend.

“The glam room was in my room so there’s about four people getting glam coming in and out, between [Taylor Armstrong], [Vicki Gunvalson], myself, Teddi did a little glam. There was a lot of people coming in and out so my door was open,” she recalled. “It was like a party in this 200-square-foot hotel room. So who walks in but Jen Shah.”

Although Tamra was caught off-guard, she said she had a pleasant experience with the legally troubled RHOSLC cast member.

“Let me tell you, [she was the] life of the party, had fun, joking, laughing, at one point we did an Instagram Live. She was very sweet,” Tamra described. “[And] I love the fact that she saw that there was glam there and she goes, ‘Oh you have glam for me.’ Yes Jen, it was just for you.’ Got in the chair, my people were doing her glam. And I had no idea she wasn’t invited to BravoCon.”

Recalling her own time with Jen, Teddi added, “She came with security, her jeweler, and her therapist… [And] I said, ‘Did you bring your therapist so he can help prepare you mentally for when you go to jail?’ And she said, ‘Yes.’”

But during a conversation with Tamra, Jen claimed, according to Tamra, that she is “not going to jail” and her therapist agreed.

“She said she wanted to go to Watch What Happens Live [and] she did not tell us she was uninvited. We had no idea,” Tamra continued. “And so she was saying, ‘I’m gonna go to [WWHL].’ I’m like, ‘Oh, cool. Go with us.’”

Although Tamra wanted to bring Jen with them to BravoCon, Teddi encouraged her against it, telling her co-host, “You’ve already been fired once. Now is not the time for it to happen again. We are not going with Jen Shah.’” And, looking back, Tamra confirmed Jen did not show up.

That said, she did show up to a rooftop party, where Tamra claimed she had words with Andy, who hinted that Jen had been fired from RHOSLC after pleading guilty to fraud.

“I saw where she confronted Andy, and it looked like it was a very tense conversation, and then I didn’t see her after that. I don’t know if she left or what,” Tamra shared.

As fans may have seen, Jen took to her Twitter page amid the claims to deny that she crashed any parties.

“Anyone believing I crashed anyones party needs a reality check, I am the party,” she wrote. “Also I’m getting paid for Bravocon, stop worrying about where I’m at. If I wasn’t at your event, party or panel then it wasn’t worth my time. Thank you for keeping my name in your mouth and trending.”

“Now is not the time to double down on your lies,” Teddi said in response.

Also, on the podcast, Tamra slammed Jill, formerly of Real Housewives of New York City, for sharing the news of her return to RHONY on a paid platform.

“It pissed me off. She knew exactly what she was doing. She’s the thirstiest housewife I’ve ever met in my life. She got the information from Vicki. I had told Vicki that I was coming back because I wanted her to hear it from me instead of the press, and Vicki met with Jill the next day and told Jill I was coming back, so she had confirmation,” Tamra revealed.

“She got on the subscription part of Instagram and said she had breaking news and that I was coming back, and she didn’t say it in a nice sweet polite way. She said it in a very negative way. ‘And my friend Vicki is not happy.’ It was rude,” she added.

Tamra went on to say that Jill “got money” for the announcement and poked fun at Jill’s claim that she’s the “most overrated” housewife.