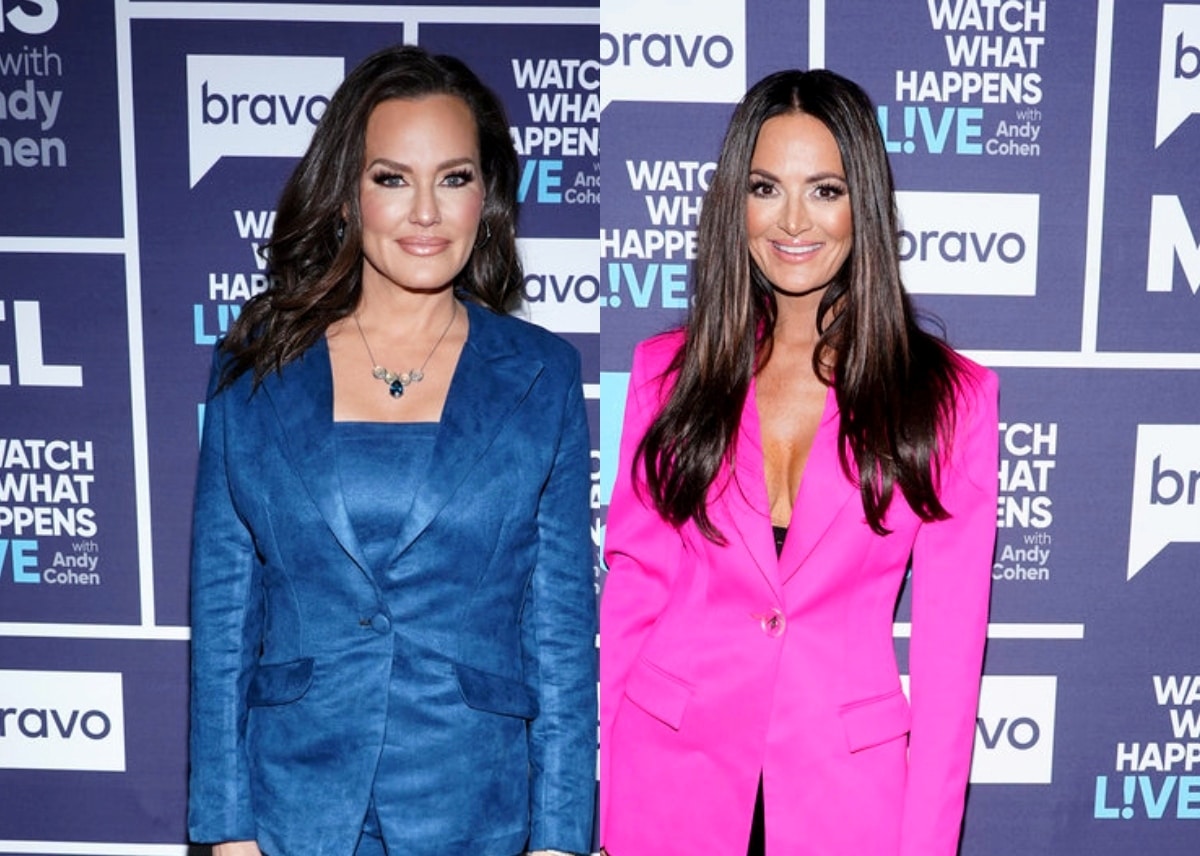 Meredith Marks and Lisa Barlow were involved in a Twitter feud on Thursday morning, following the release of the first episode of the After Show for The Real Housewives of Salt Lake City season three.

After Lisa suggested that her castmates had attempted to catch her off-guard by inviting a man she allegedly had an affair with to Whitney Rose‘s Wild Rose Beauty party during season two, Meredith took to Twitter to deny having any knowledge about the supposed affair, which Lisa claims never actually happened.

“They invited a gentleman they thought I had an affair with, hoping to trip me up. [And] Meredith knew about it,” Lisa had said on the November 16 episode of the RHOSLC: After Show.

But in response, in a November 17 tweet, Meredith wrote, “I knew nothing about your affair with the man that Whitney invited to her Wild Rose party at the time of the party. The first I heard about that affair was months later from Whitney. You cannot hold me responsible for something I knew nothing about.”

Quickly clapping back, Lisa clarified, “There was NO affair.”

“That’s why it’s so gross,” she continued. “And you’re [on] camera saying you knew he was there, and the intent was exactly what I explained in my video. Whitney invited him but you all knew the intent.” 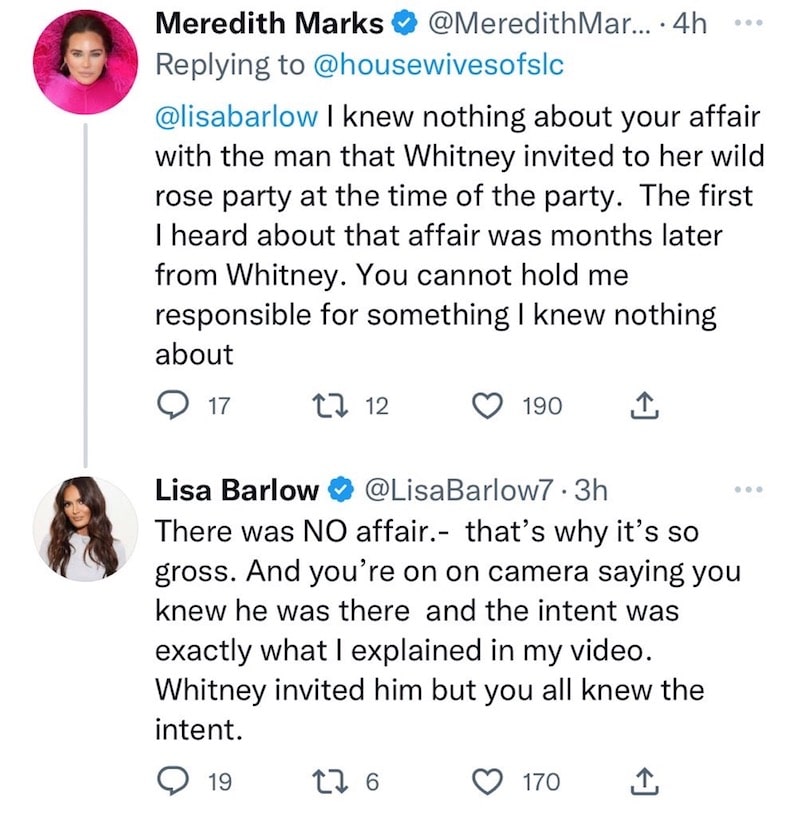 Still, Meredith insisted she knew nothing of the unnamed man, claiming the setup was constructed by Whitney.

But Lisa was unconvinced, patronizingly telling her co-star, “You’re unhinged.” She also added a couple of red heart emojis. 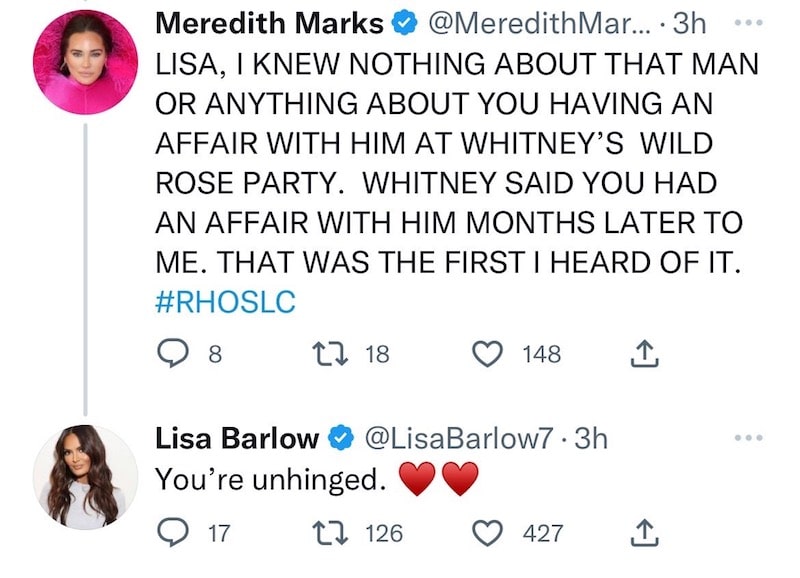 “No Lisa, not unhinged,” Meredith replied, “but I am tired of the perpetual lies about me. I did not know anything about that man or any affair you had with him or anyone else at Whitney’s wild rose party. I had nothing to do with him being there.”

Even though Meredith insisted she did not play a role in the Wild Rose setup of the second season, Lisa seemed convinced that she was in the loop, even suggesting there was footage proving her point.

“Don’t worry. I’ll request a reminder of footage. I’m busy working so no more @ please,” she stated in a final message to her one-time friend. 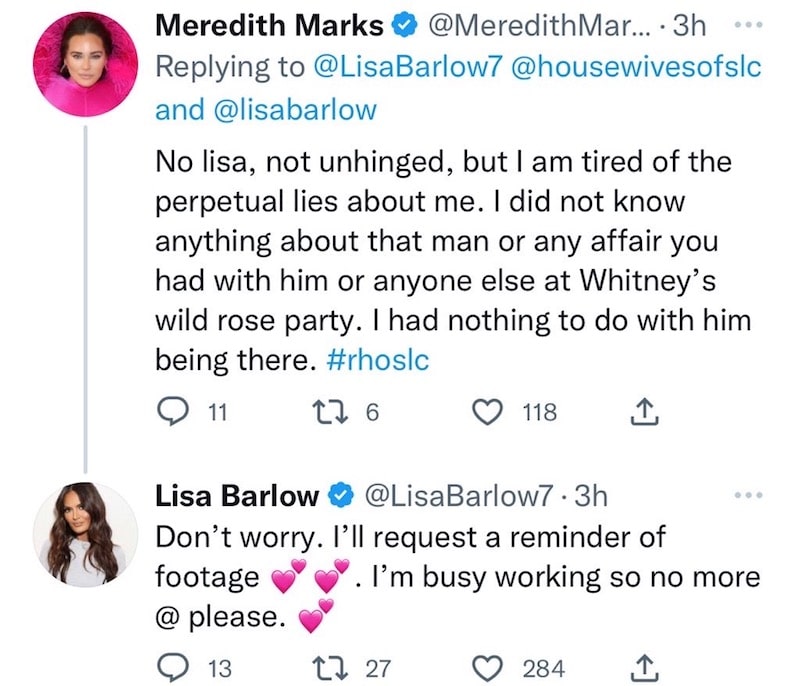 Meanwhile, in her own final tweet, Meredith told Lisa she’d love to see the alleged footage.

“Perfect. I would love to see it because it does not exist and I am working too so [please] just stop spreading lies so we can both get back to work,” she told her castmate. 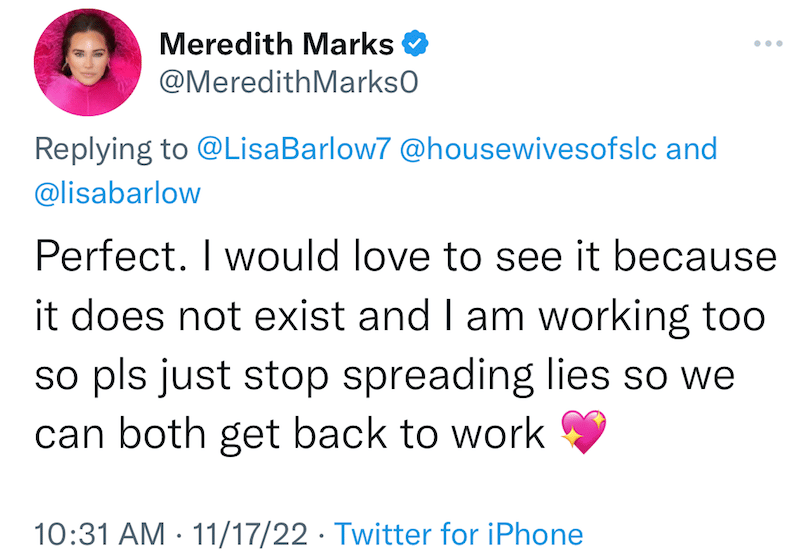