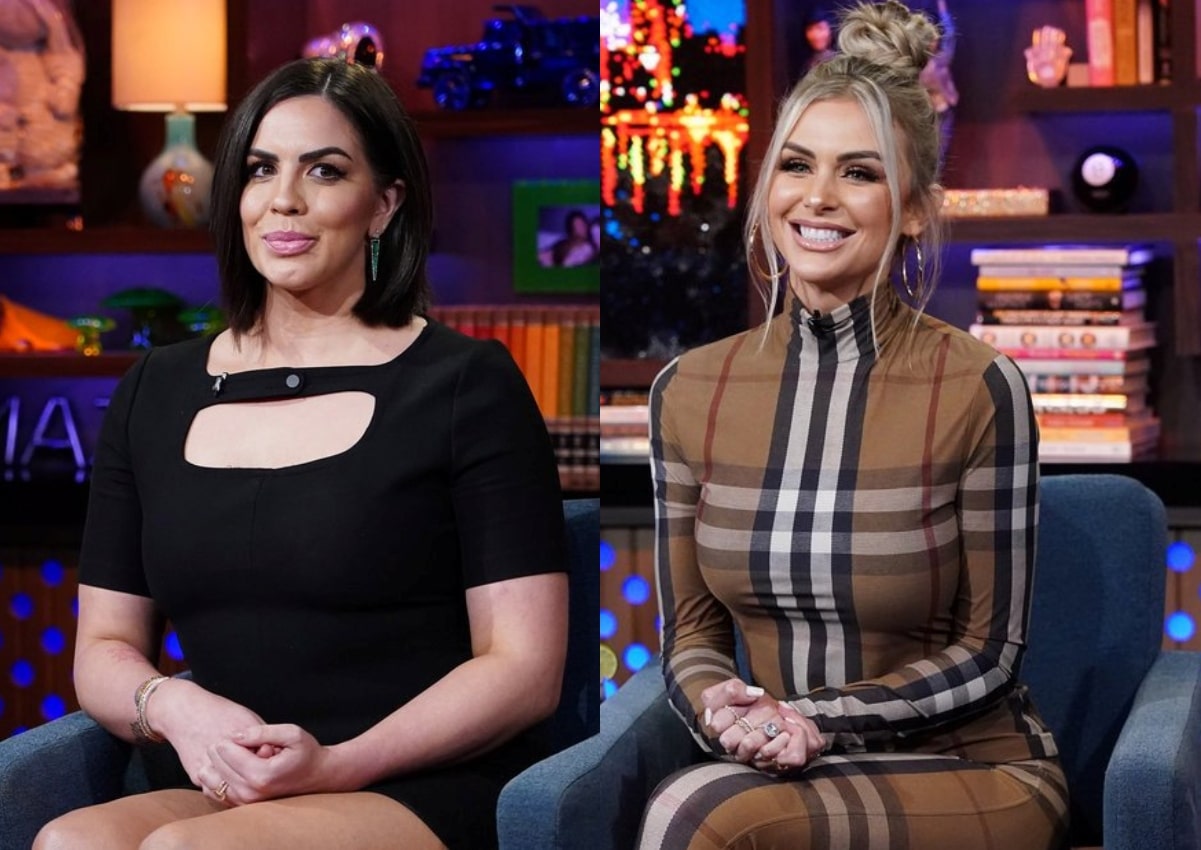 Katie Maloney confirmed a rift with Lala Kent on the latest episode of her podcast.

Before teasing the upcoming 10th season of Vanderpump Rules and revealing if she’d consider a crossover to The Real Housewives of Salt Lake City, Katie hinted that all is not well between them and admitted it was “hard to film” amid her divorce from Tom Schwartz — and his short-lived fling with their co-star, Raquel Leviss.

“Vibes are definitely off,” Katie admitted of the dynamic between her and Lala on the January 13 episode of Dear Media’s You’re Gonna Love Me.

Then, after saying, “Nope,” to a listener who wanted to know if she was still friends with Raquel, Katie responded to someone else who asked if it was challenging to film during a time when she was in the middle of a divorce and hearing all about Tom’s attraction to Raquel.

“You f-cking bet it was. That was a huge thing because it was still a very tender subject, a tender time in our lives, and we were exploring and still kinda navigating the friendship between us, and that whole aspect of it all was still new to both of us,” she explained. “We just barely moved out of our house and so there was still a lot of things that were new to both of us so yeah, you throw in filming into the mix of that and yeah, it was definitely, definitely very difficult but I think we made it through.”

Commenting on the recently released trailer, Katie admitted she was “nervous” to see it for the first time.

“The summer was intense. It was an intense time, so I knew it was gonna be an intense trailer,” she noted. “It’s been a long time coming, and I know people were anxious and waiting for it to come up. It’s gonna be a good one. A lot of people are saying that it feels like old school Vanderpump Rules, and I totally agree, and I think that’s kinda how the season’s gonna go as well.”

During the season, Katie struck up a romance with actor Satchel Clendenin but has more recently been linked to  Lukas Gage.

“I feel like it’s fun, just because I’m kinda just enjoying the fun aspects of it,” she said of dating. “I haven’t really wanted to get into a full-blown relationship, so I guess that’s why I’m into it more.”

And, while Katie acknowledged that it is sometimes “a little weird” to be single amidst friends who are married with children, she said it’s “the best of both worlds.”

“I do have a handful of single girlfriends. That’s fun, and we all go out. Then yeah, some of my closest friends, they’re married with babies, and it can be tough at times. But it’s also so much fun with the babies,” she explained.

Also, during the episode, Katie responded to a fan who wanted to know if she’d ever leave Pump Rules for RHOSLC.

“Never say never, but I don’t know. I live here, and I’m opening up a business here, so that’s kinda hard, but maybe if I ever open up a business in Utah, it might make sense,” she teased.