Southern Charm stars Kathryn Dennis and Thomas Ravenel appeared to be co-parenting nicely just weeks ago but according to a new report, their good times came to an abrupt end after a recent public spat on social media.

On July 23, a source revealed the former couple has been fighting again and revealed the shocking details of their allegedly deteriorating relationship.

The drama between Kathryn and Thomas started again after he shared a photo of himself and his two kids, four-year-old daughter Kensington and two-year-old son Saint Julien, on his Instagram and Twitter pages on July 20, the day after the first part of the reunion aired.

“Me and the kids enjoying our last meal together before they’re off to school and then picked up by mom for her 7 out of 14 days. I’m going to miss them so much,” he wrote in the caption of the photo. Below is a screenshot one of our readers sent in to us that morning. 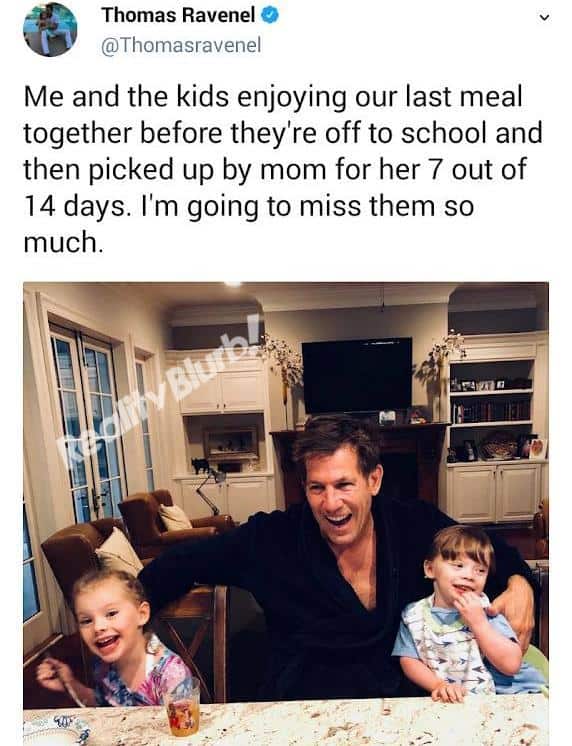 “Wow, a little specific don’t you think?” Kathryn asked in response to the post which some fans suspected was a passive-aggressive dig at her. Moments later, Thomas deleted the photo from his social media pages.

“Kathryn texted Thomas to tell him to take the photo down. She thought Thomas was jeopardizing the kids’ safety just to be mean with his comments,” an insider told Radar Online. “They are not really getting along right now.”

During the recent season finale of Southern Charm season five, it was stated that the former couple shares 50/50 custody of their two kids. However, according to the insider, Kathryn hasn’t yet signed the documents making the new custody agreement official.

“Kathryn is holding up the settlement,” the source claimed. “She isn’t making this easy for Thomas.”

When Thomas’ now-deleted Instagram post was shared, Kathryn was in California and for some reason, the trip was said to be a “point of contention between them.”

As for why Kathryn isn’t yet ready to sign her new custody documents, the source said she is waiting until after the sexual assault investigation into her former boyfriend is complete.

“Kathryn is waiting until that gets resolved before she signs any papers,” the source explained.