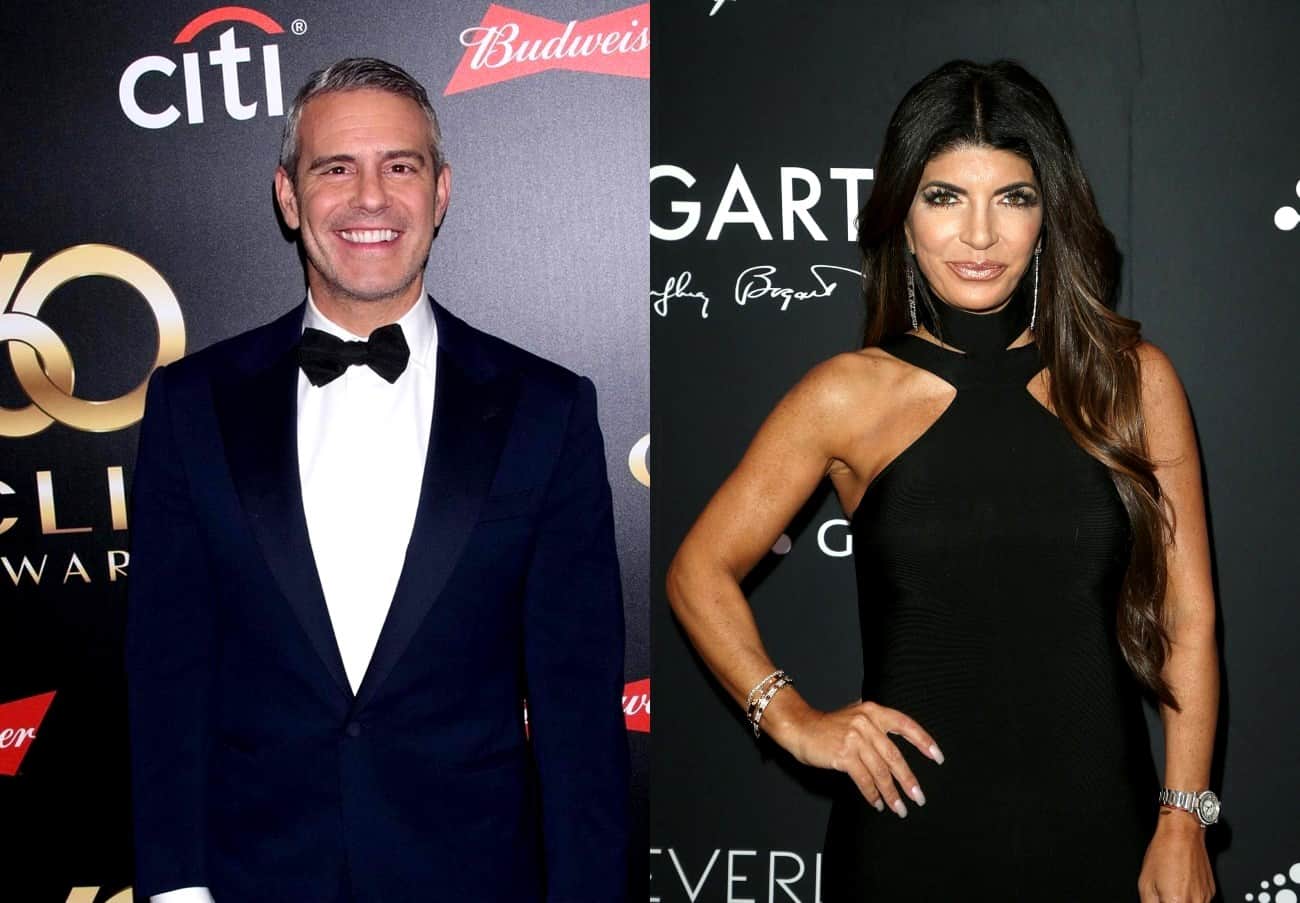 Watch What Happens Live host Andy Cohen reveals how Real Housewives of New Jersey star Teresa Giudice is handling accusations that she’s cheating on her husband Joe Giudice. Plus a new report is revealing why Teresa has yet to file for divorce.

After a lot of talk of Teresa cheating on Joe (namely with a man half her age, which the reality star has denied), Real Housewives producer Andy is reminding fans that the mother of four can handle the tough rumors.

“[Teresa’s] been on the show for a long time, so I think she understands that whatever is going on we’re going to talk about,” Andy dished in an interview with US Weekly.

But just because the Bravo star is no stranger to rumors and gossiping among her castmates, that doesn’t mean she still doesn’t lose her infamous temper from time to time. In fact, Andy teased that Teresa “gets close” to the same level of anger she once displayed back in season one when she flipped the table “a couple of times.”

And perhaps this extra drama is all because Bravo producers managed to “get the cast right” this time around.

“I feel like we had a few rough years in Jersey,” the 51-year-old WWHL host admitted. “I feel like we got the cast really right and so that’s why we kept it the same and they’re all stars, all those women so it’s really good.”

As fans recently saw in the season 10 RHONJ trailer, allegations were made against Teresa, regarding her being unfaithful to her husband Joe as he served time in prison for bank and mail fraud.

But the relationship between Teresa and Joe has been murky over the last couple years, to say the least, given that both Teresa and her husband have had to serve time behind bars. The Standing Strong author even admitted to Andy on air that she would divorce Joe if he was deported from the U.S. to Italy.

Considering Joe’s current standing with the law, Teresa may very well be looking at divorce in the future. As fans already know, Joe has been living under the custody of ICE in Pennsylvania after being released from prison in March. The 47-year-old has recently expressed wanting to live in Italy while waiting for the judge’s ruling on his deportation appeal, but that could mean he wouldn’t be allowed back in the States.

Despite this trying time, a source close to the couple revealed that Teresa is still hopeful about the outcome, which is apparently why she has yet to file for divorce.

“[Teresa’s] holding out hope for her daughters’ sakes that Joe doesn’t have to go, but she’s come to terms with the fact that that probably isn’t happening as is Joe’s family,” the insider revealed to Hollywood Life.

However, the mother of four is still trying to be realistic. “She knows if Joe does leave ICE to go to Italy, he probably won’t be coming home. She is fully prepared at this point,” the source explained.

But given that nothing has been set in stone yet regarding her husband’s case, Teresa hasn’t filed divorce papers just yet, hoping for the best for her four daughters.

“If it weren’t for her daughters, she would’ve probably filed for divorce by now,” the insider dished. “Teresa has been very seldomly speaking to Joe but they haven’t communicated very much in quite some time. When they do, it’s really just about the girls. She has visited him with the girls on occasion, but she does that for them. It’s so awful in there that she does her best to let the girls see their father all while protecting them at the same time. It’s a hard balance.”