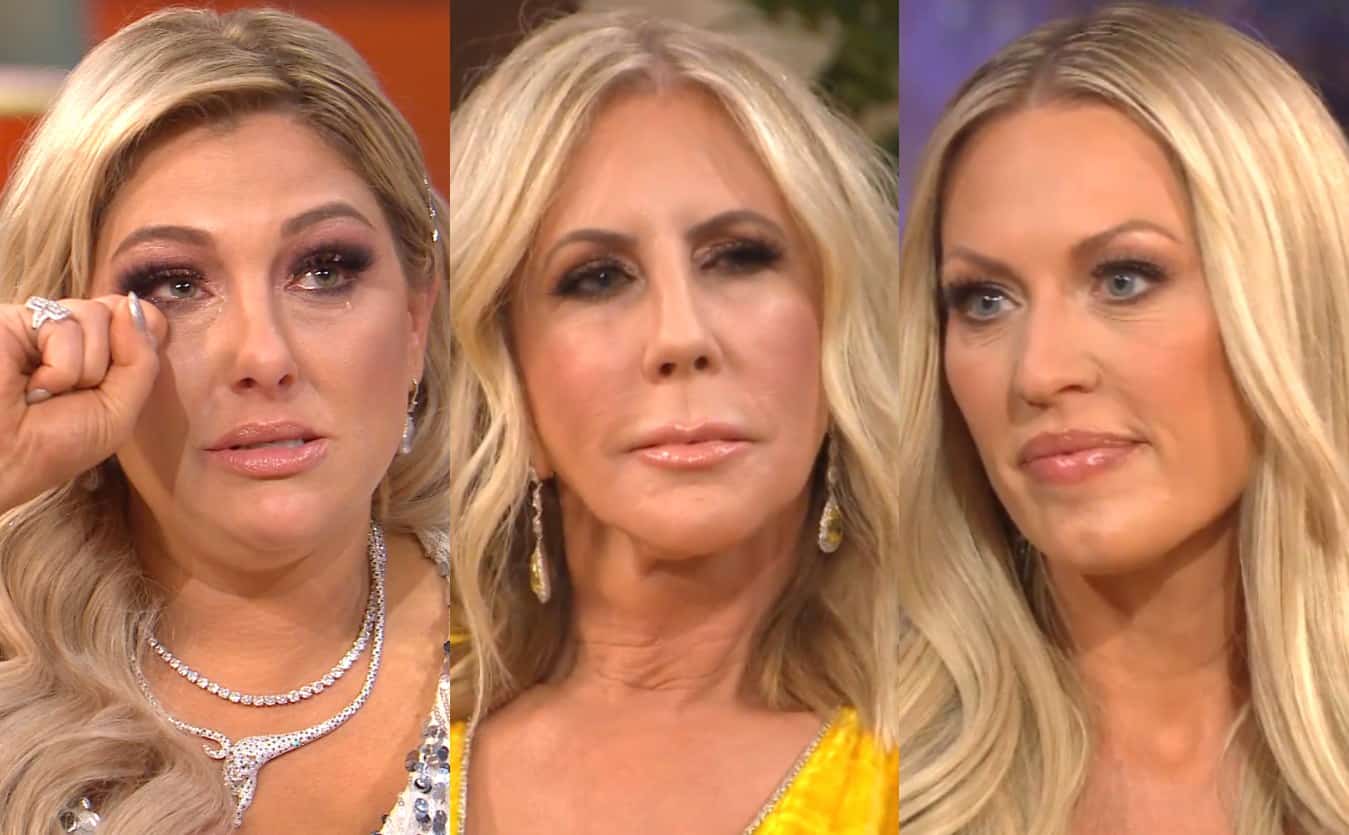 The Real Housewives of Orange County reunion is more like a therapy session as Andy delves into all of the juiciest topics.

Anddd we’re back. Vicki is shrieking about Braunwyn‘s life choices and shouting things like, “Do it off-camera! Turn it down, Braunwyn! You are brand new on this show!” Wow, Vicki. Way to come at Braunwyn HARD. Vicki claims that she lost “two clients” because of Braunwyn’s class-less behavior, but I guess the fact that Vicki demonstrated how to give a blow job in seasons past means nothing to her. Who knew Vicki had such a strong moral compass?

I love how Andy lets Vicki know that “nothing has changed about this show.” Vicki is not having it and just makes fun of Braunwyn. Vicki claims now that she’s a grandmother, she’s going to act respectfully (I guess berating someone’s sexual preferences doesn’t fall into the category of disrespectful?). Cue the footage from seasons past. It’s an ugly reminder of what Vicki was capable of back in the day. What happened to the “fun Vicki?” Vicki goes on and on about how trashy the behavior has been on the show as of late. Braunwyn claims it was “really hard” to say that she enjoys being with her husband and other women, but that she paved the way for one of her children to come out.

Vicki chooses to ignore any of the good stuff Braunwyn says and chooses only to say, “I think it’s disgusting. Choose your lane.” I cannot get over Vicki’s behavior! Before Vicki departs after bashing people’s life choices, Andy bids her farewell and basically lets her know she is a total a*shole. Vicki mutters, “Don’t forget where you came from!” to Andy as if Vicki is responsible for Andy’s success. Once she leaves the set, Vicki shouts, “They can all go f*ck themselves!” Somebody’s mad that she’s not included in the final filmed segments of the reunion. Vicki cries that she’s “embarrassed to be a part of the show,” yet she is throwing a hissy fit about being led off the set.

Once Vicki is gone, Andy is free to dive into a subject that Queen Victoria can’t bear to discuss: sex lives. We revisit the chemistry between Braunwyn and Tamra and then Andy dives into knowing about Braunwyn’s threesomes. Not to be outdone, Tamra explains that she, too, has had threesomes. In fact, she had one with THREE other women…so technically, it’s a fivesome?

Give it up to Andy for all of the train puns leading up to the Kelly segment. Kelly states that things have never been better between her and her mother. It turns out her brother was the one spreading all of those nasty rumors about Kelly throwing her mother down the stairs. Luckily, things have become smoothed over.

How awkward must it be for Kelly to see all of the footage of her with Dr. Brian now that she’s engaged to another man?! Kelly lets Andy know that her relationship with Dr. Brian was not very happy. Of recent, things have gotten very serious with Rick Leventhal, the new man in her life. Things are so serious that she got engaged to him! Yet…he has not even met Kelly’s daughter, Jolie. Explain that to me. The good news is Jolie has met Rick since the reunion was filmed!

Another conundrum is the fact that Kelly hasn’t thought through this LDR. Like, what’s gonna happen with your kid? She can’t take Jolie out of the state, yet her fiancé is based out of New York. Kelly becomes flustered when the women shoot 99 questions her way and blurts out, “Okay, well we’re gonna work that out.”

Oh God, please don’t make me re-watch the sexy burlesque show that Emily put on in Vegas…for her in-laws. Emily gets teary talking about her super-supportive (JK) hubby, Shane, and states that she is going to try and work it out with him for her children. Andy is really digging deep with Emily. He reminds her that she is obese and she begins crying…yet again.

Bringing Shane to the stage certainly isn’t going to make Emily feel better. He meanders out in his too big of a suit and he looks like a ring bearer. Andy lets Shane know that he’s “pretty high up there” as one of the husbands that most viewers hate most. Shane gives some sort of snarky response cuz that’s what he does best.

Regarding Emily’s sexy dance, Shane claims he was very “flattered,” but upon hearing that she was doing it for the cameras, he became “uncomfortable.” Shane gives textbook answers about what he loves about Emily and does his best to reverse his a*shole image.

Emily shares that she talked about divorce with Shane, but the ladies believe that at times, Emily plays the victim when it comes to her marriage. Gina makes it clear that they don’t always present their marriage the way it really is. When Andy asks if the couple is happy in their marriage, Emily awkwardly says, “I think we are.” I mean, they’ve come up with a “mission statement” (WTF!) for their marriage, so things are pretty cut and dry now.

Gina cringes just as much as I do during her season recap. Gina has had a hell of a season. Despite the hot mess that’s unfolding regarding her ex-husband Matt, Gina is happy with a new guy, Travis.

A month after the season filming wrapped up, Matt was arrested for allegations of domestic violence. Gina explains that there was alcohol involved and they had been arguing that night after a night out. The Uber driver then kicked Matt out of their ride while Gina stayed in the car and made it home, expecting Matt would call himself another Uber ride. However, Matt’s cell phone died and he had to walk home, all the while stewing mad.

According to Gina, Matt became very irate, and he wound up getting up to the second floor of her house where things escalated. Gina reveals at one point, she made it out of the house to the neighbor’s home to scream for help, only to have Matt allegedly drag her back into their home. Fortunately for Gina, a lot of the neighbors were awoken by the altercation and called the cops. Gina gets incredibly emotional re-telling the scary events and shares that Matt could possibly be facing seven years in jail.

All of the women are heartbroken that Gina had to go through that night. Gina’s family begged her to leave Matt once and for all, despite Gina being afraid. She explains that now she just wants “out” and understands what a real relationship is thanks to her new boyfriend. Andy reminds Gina that she is very brave for sharing her story and I have to agree. Here’s to hoping Gina gets some sunshine after all of those rainy days this season.

For the final segment, Andy asks the ladies to set their intentions.

Kelly wants to let go of negativity and wants to bring in her fiancé, Rick (perhaps she should hope for him to meet her daughter?).

Emily wants to let go of hurt (hip replacement or mental hurt?), and she hopes to bring in a new beginning with Gina.

Braunwyn is letting go of trying to please everyone and is bringing in “bad a*s Braunwyn” (eye roll).

Gina explains she’s gonna keep it “light,” but is gonna let go of “risky beauty choices.” I LOLed. She wants to let in her positivity and I think that’s a good goal.

Tamra is letting go of loose lips (good luck with that…) and wants health and wellness for her fam.

And last but not least, Shannon is gonna let go of her past (but then what will become of her storyline?) and wants to bring in all good things for the new person in her life. Andy believes that was a therapeutic reunion and brings out tequila to wrap it all up. The women stand, toast, and raise their shot glasses to “sisterhood.” If nothing else, that toast just solidifies the fact that all of these women are bat sh*t crazy. Cheers to the end!

TELL US – THOUGHTS ON THE RHOC REUNION?