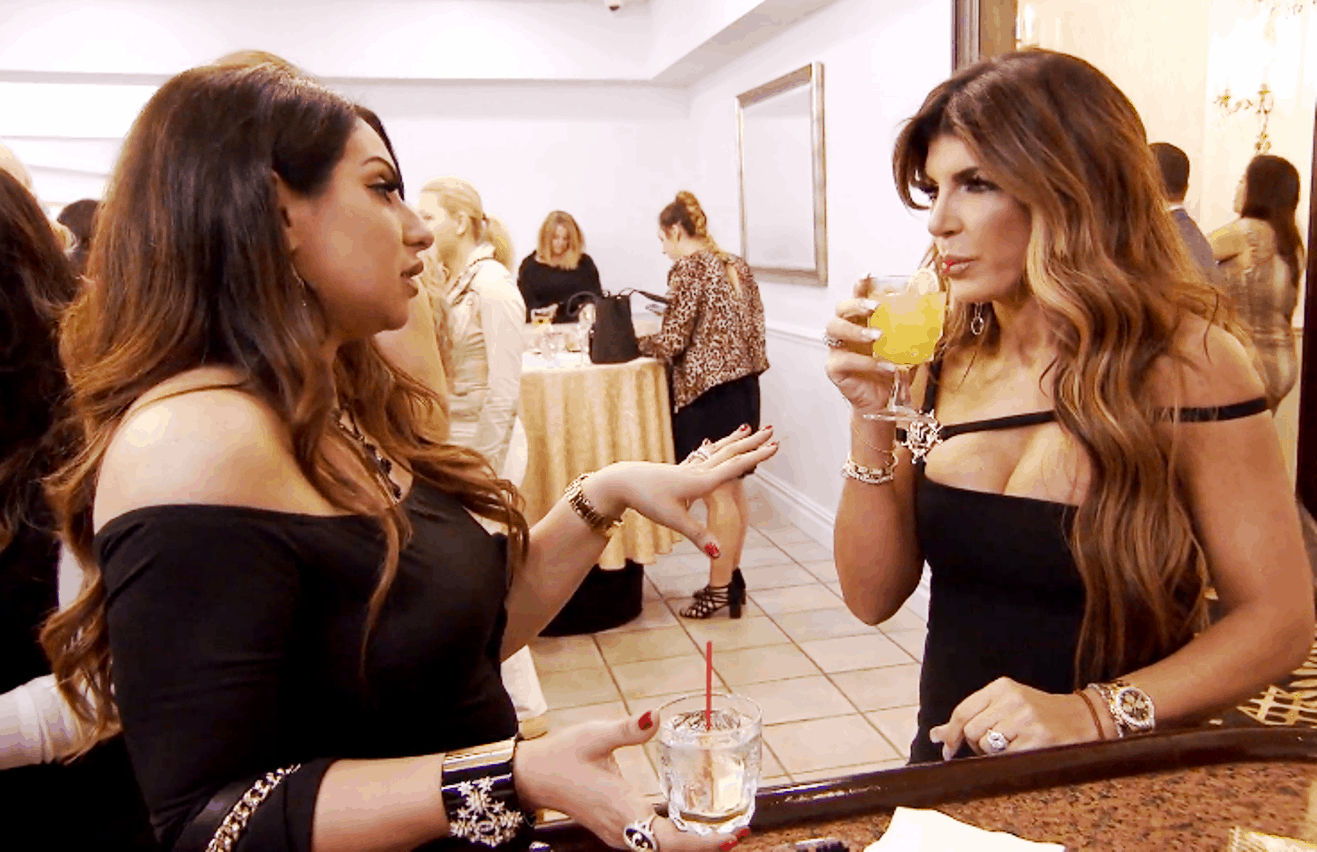 On this week’s episode of The Real Housewives of New Jersey, we are back to the out of control scene with Margaret DUMPING water on Danielle and Danielle JERKING Margaret’s weaved pony.

Danielle exits stage left with Teresa after essentially assaulting Margaret. They FaceTime Marty and tell him about the altercation. Marty backs up Danielle, unfortunately. It must be the Stockholm Syndrome!

All of the ladies are trying to explain to Teresa what Danielle did and how it was worse. She not only pushed Margaret, but she also damaged Steven Dann’s ridiculously expensive property along with Margaret’s purse.

Teresa comes back inside and is STILL defending Danielle. She justifies this behavior as old school Italian. Teresa thinks Margaret assaulted Danielle first by dumping water. She is just not very bright and her logic makes zero sense. Margaret is hurt by Teresa’s refusal to see Danielle as a wack job. She tells Teresa she has to pick a side. Teresa is a friend to no one! Period!

Teresa walks Margaret to her car and they discuss it. She is just not seeing things correctly at all. Margaret leaves alone, and she calls her husband Joe and breaks down into tears. She tells him what went down and how Teresa is still defending Danielle over this.

Teresa goes back inside with the other ladies. The ladies look shell-shocked over what they just witnessed. Teresa actually says, “Did you at least have a good time?” Steven Dann is pacing in the background debating if he should call the cops to have these ladies removed or call the insurer of his overpriced candles.

Teresa shares that her dad Giacinto Gorga spent five days in the hospital with pneumonia after Easter. Dolores comes by to visit and chat. Teresa says Joe Guidice is cracking. She tells Dolores how Joe has been giving her sh** over her spending. Dolores tells Teresa she needs to protect herself and check out the contents of that prenup. Teresa says she doesn’t even know what she signed??? Yikes! Dolores thinks he will take anything he wants since he has been supporting her all of these years.

Joe is taking care of Margaret and she claims the doctor said she had whiplash. He doesn’t want her near Danielle ever again. Melissa tells Joe Gorga that she is fearful that fashion shows bring out the crazy in Teresa. Does Posche ring a bell?

Jackie is with her family and is remembering what her dad said about her eating disorder in front of her kids. She tries to explain to her kids how proper nutrition is important and they shouldn’t compromise their health for the “perfect” body. Jackie’s kids think being kind is more important. Now, this is good parenting!

Teresa and Joe Gorga are shopping for her new pool’s patio furniture. Somehow, I don’t think Joe Guidice would approve. Teresa is still defending Danielle like a broken record. Joe tries to break through that thick head of hers to get her to see reason. She rationalizes that she didn’t like being judged for being in prison so she doesn’t judge Danielle? They show countless clips of Danielle acting like a jacka**. She wants to wait until Danielle assaults her before she cuts her off? Joe tells her to make nice, which is not happening.

Gia and Teresa have a glam squad to get ready for Melissa’s fashion show? Really? It isn’t like New York Fashion Week! Teresa, will you ever learn? Waste of $$$. Doesn’t anyone on these shows do their own hair and makeup? It is called REAL HOUSEWIVES, not Celebrity Housewives! Gia is talking to her dad Joe and Teresa has to interject. She says, “Is he calling to apologize?” Gia has to spoon-feed her mom how to speak to her dad which is pretty messed up. She has more emotional maturity than her mom.

Melissa has her first menswear fashion show for ENVY. She has little Frankie “abs a poppin” Catania modeling for the fashion show. He is a really good choice since he is such a handsome guy. It is funny that Melissa thinks that Antonia is looking at her like she is a boss. Is she that clueless? She is mortified that her mom can be an attention whore and is making an a** out of herself twerking on the runway. Teenage girls don’t like it when their mom tries to act like they are teenagers themselves.

Everyone is chatting about what side they are on and the consensus is pretty much Margaret. Bill has a good point saying what Danielle did was a higher level of physicality. I also like how easygoing he is about Jennifer spending his money. Her closet is sick!

Dolores is bringing her ex Frank since David is unavailable. Dolores mentions their son is wearing a bathing suit and they both agree he won’t fit into a “ball hugger.” This is just gross on so many levels for his parents to mention this.

We are at the Envy Fashion show and there is a full bar, but what they really need is a SWAT team with a battering ram to control this group. They also could use a cage like the ones they use in extreme fighting to lock up these bit**es.

Wait! Did Dolores just say David is at sniper school? I have heard excuses before but this is just messed up. Jennifer thinks he needs relationship school. Agreed! Joe B. has a crush on Dolores since he likes to put his hands in all of her crevices? They justify it since he is a plumber? Okay… Frank tells Margaret to never turn your back on a stripper? Does he speak from personal experience?

Margaret isn’t going to make an effort to talk to Teresa. She wants her to make the first move since she has always had Teresa’s back. Jennifer and Dolores are trying to mediate the situation. The awkward meter is going off the charts when Teresa arrives. Teresa is being really defiant. Not surprising that she doesn’t like to admit she could be wrong.

If Teresa ruins Melissa’s event she is going to shower her with damn sprinkle cookies! Justice! But what a waste of good cookies! Jennifer tells Teresa that Margaret said she was an embarrassment defending Danielle. There is now a stand-off. Teresa then shocks and awes by pouring water on Jennifer is a really poor attempt to show her how that could be a trigger for hair pulling. She has officially lost her mind, or what’s left of it! Teresa then breaks the glass. She is a freaking loose cannon.

The models all look great during the fashion show and it appears to be a success. Gia keeps saying Frankie is so hot! I think there might be a love connection there…

Jennifer tells Melissa that Teresa dumped water on her but she controlled herself and didn’t assault her over it to make her point. Margaret can’t stand being around Teresa right now with her batting eyelash routine of denial. Teresa tells Melissa to keep her friend in check and kiss her freaking ass****. Yikes! TMI!

In future episodes, we are getting some Jersey Shore action, prom with Gia and Frankie, and finally Italy for an emotional reunion with Joe. Good times ahead finally, I think…