Home Vanderpump Rules Vanderpump Rules’ Scheana Shay Reveals the Reason This Season Was the Hardest to Film, Explains Why Relationship With Brock Davies Feels Like Her “First Real One”

Vanderpump Rules’ Scheana Shay Reveals the Reason This Season Was the Hardest to Film, Explains Why Relationship With Brock Davies Feels Like Her “First Real One” 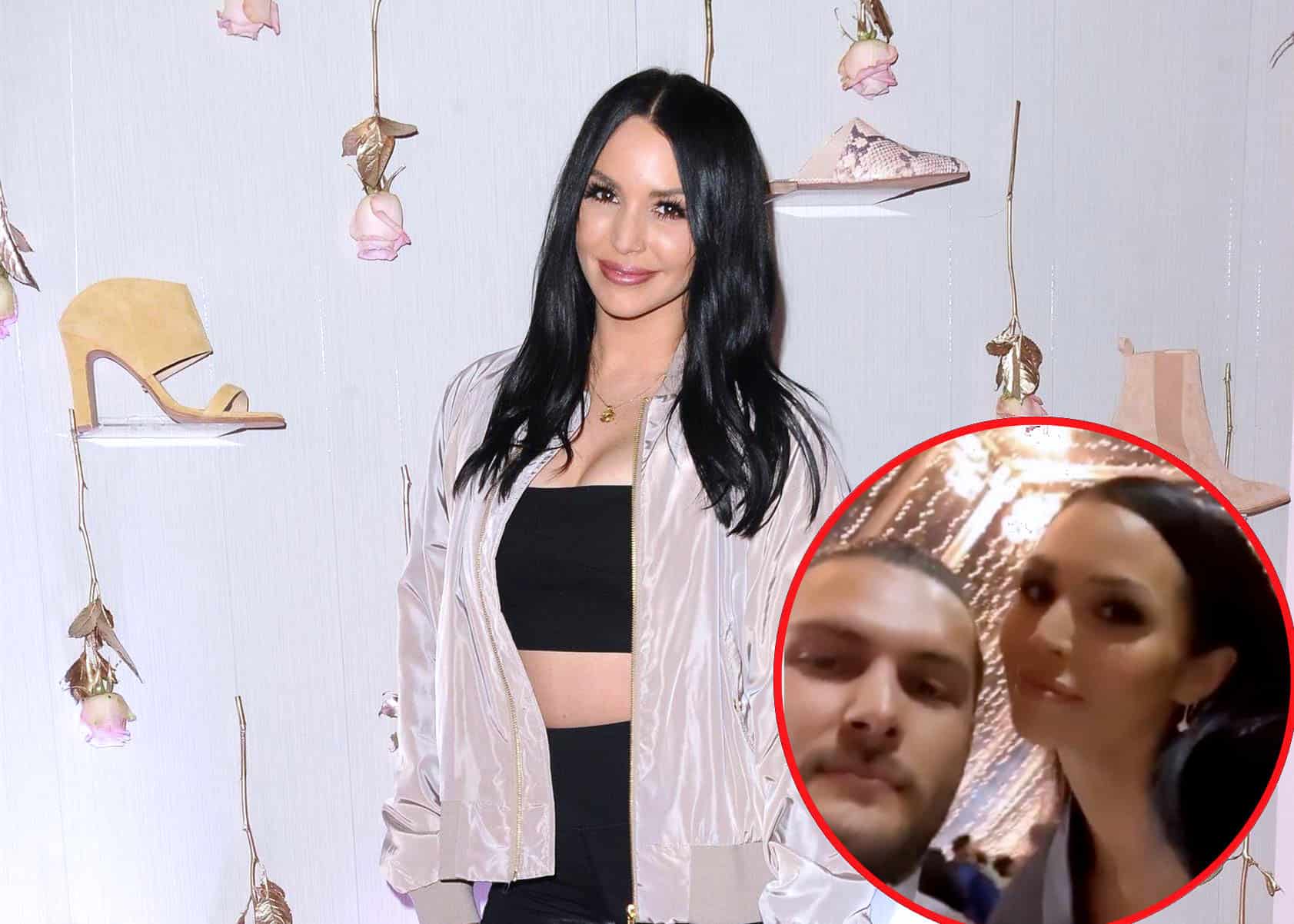 Scheana Shay was going through some things last year while filming the eighth season of Vanderpump Rules. Plus the Bravo star also explains why her relationship with boyfriend Brock Davies feels like her “first real one.”

After fans took note of her overly emotional behavior on Tuesday night’s episode of the show, Scheana explained that she was in a “very bad place” in 2019 before opening up about her struggles with anxiety and depression on Twitter.

Following a tweet from a fan who suggested Scheana was acting in an embarrassing manner on the show and said they felt bad for her, Scheana said the new episodes have been hard for her to watch.

“Agreed. Thanks. I was in a very bad place personally last year. It’s hard to watch back,” she wrote. 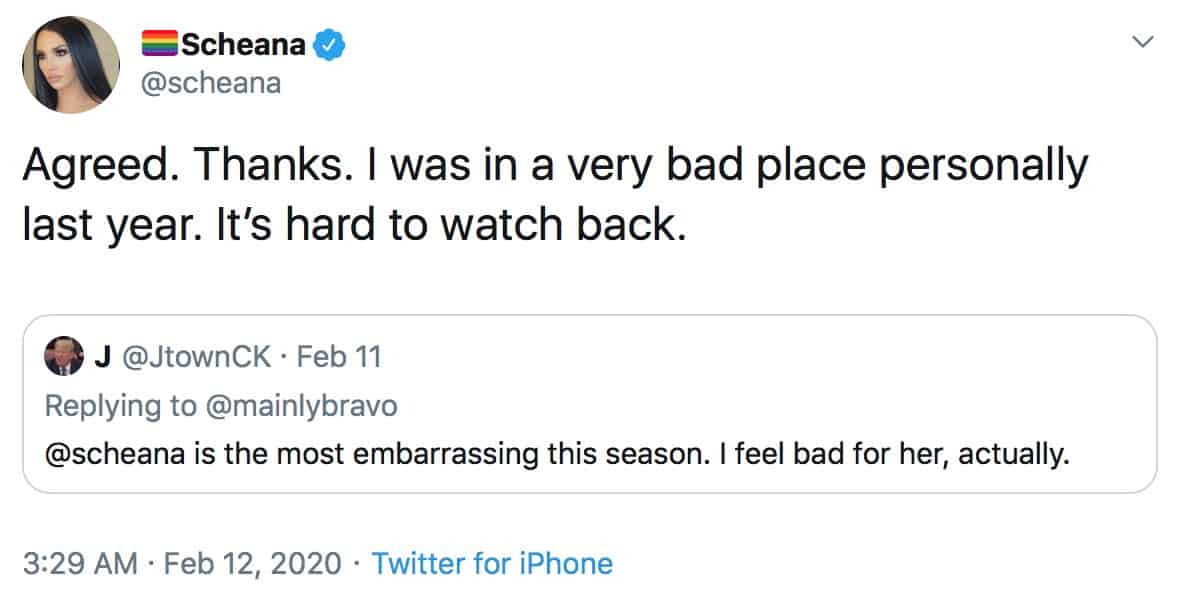 Scheana then admitted that while she didn’t plan on revealing what she was going through last year, she’s been struggling with anxiety and depression for the past several years.

“I wish I could tell you guys all of the real things I was going thru last year but I’d rather just move forward,” she shared. “I’ve struggled w anxiety daily and depression on and off for many years now. This season was probably the hardest to film for me yet.” 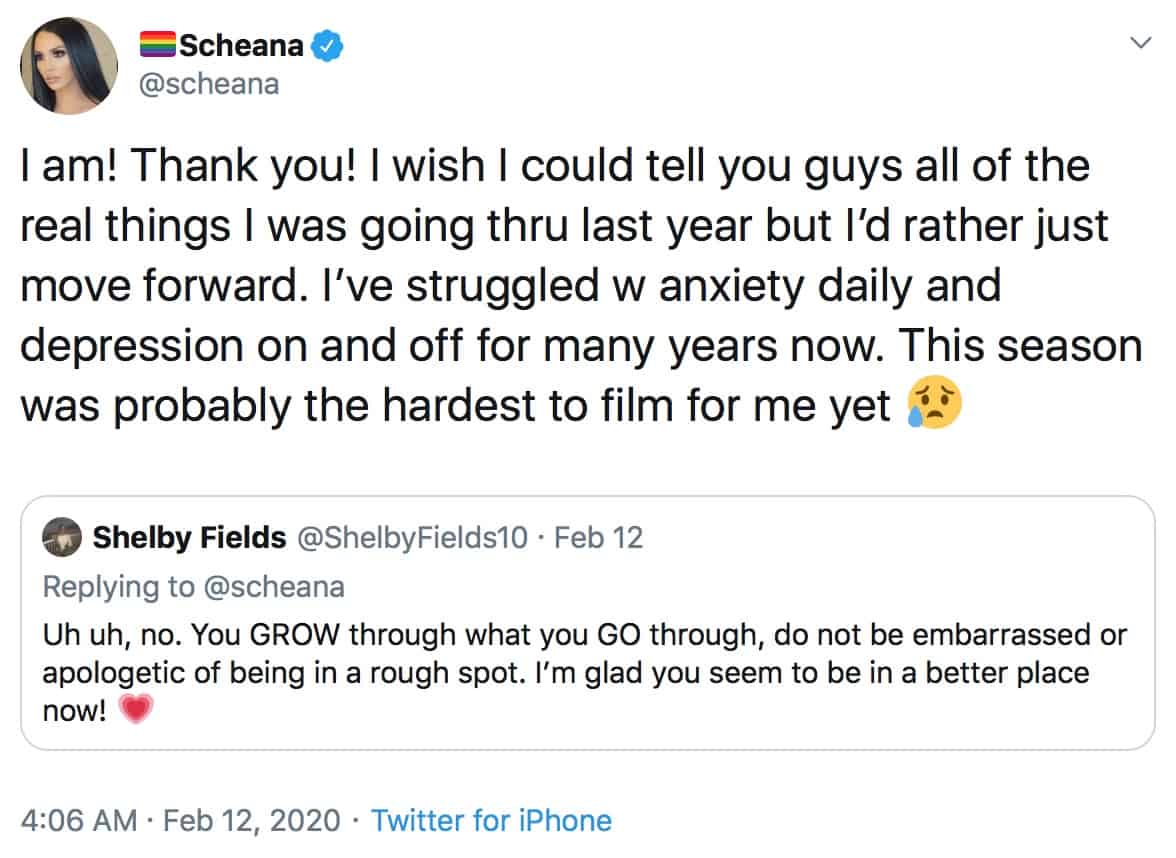 Scheana’s messages about her mental health issues come on the heels of a conversation between Ariana Madix and Lisa Vanderpump, during which Ariana spoke of her own struggles with depression and admitted to having suicidal thoughts.

Scheana is also opening up about her new relationship with boyfriend Brock, explaining why this feels like her first real relationship.

“My new relationship honestly feels like the first real one I’ve ever been in,” said Scheana to PEOPLE. “I don’t think I actually was ever truly fully happy until now. I think I told myself I was happy. I acted like the whole world was sunshine and rainbows when in reality, it’s not. But I think you know it’s like you have to kiss a lot of frogs to find your prince and I found a king.”

Scheana, who was formerly married to Mike Shay, now admits she “jumped in way too quick” into her relationship with ex-boyfriend Rob Valletta immediately following her divorce.

“I just moved on like everything was okay and I do think after a relationship that long, a marriage, a divorce, something that was so traumatic when it ended, I think you do need to give yourself some time. Still have fun, but just know to probably not jump right in because then that kind of is a rebound. I felt like I was dealing with two breakups at once, and that made it a lot harder for me,” she shared.

As for her relationship with Brock, an Australian rugby player and gym owner, she is choosing to keep it a bit more private.

“I’m happy,” revealed Scheana. “I don’t feel like I need to brag about him because I know he’s not going anywhere. He’s very nice, and he treats me the way I deserve to be treated.”