RHONJ Recap: Teresa Tells Husband Joe She Wants to End Their Marriage, Plus She Ends Friendship With Danielle After She’s Exposed in Hair Pulling Drama 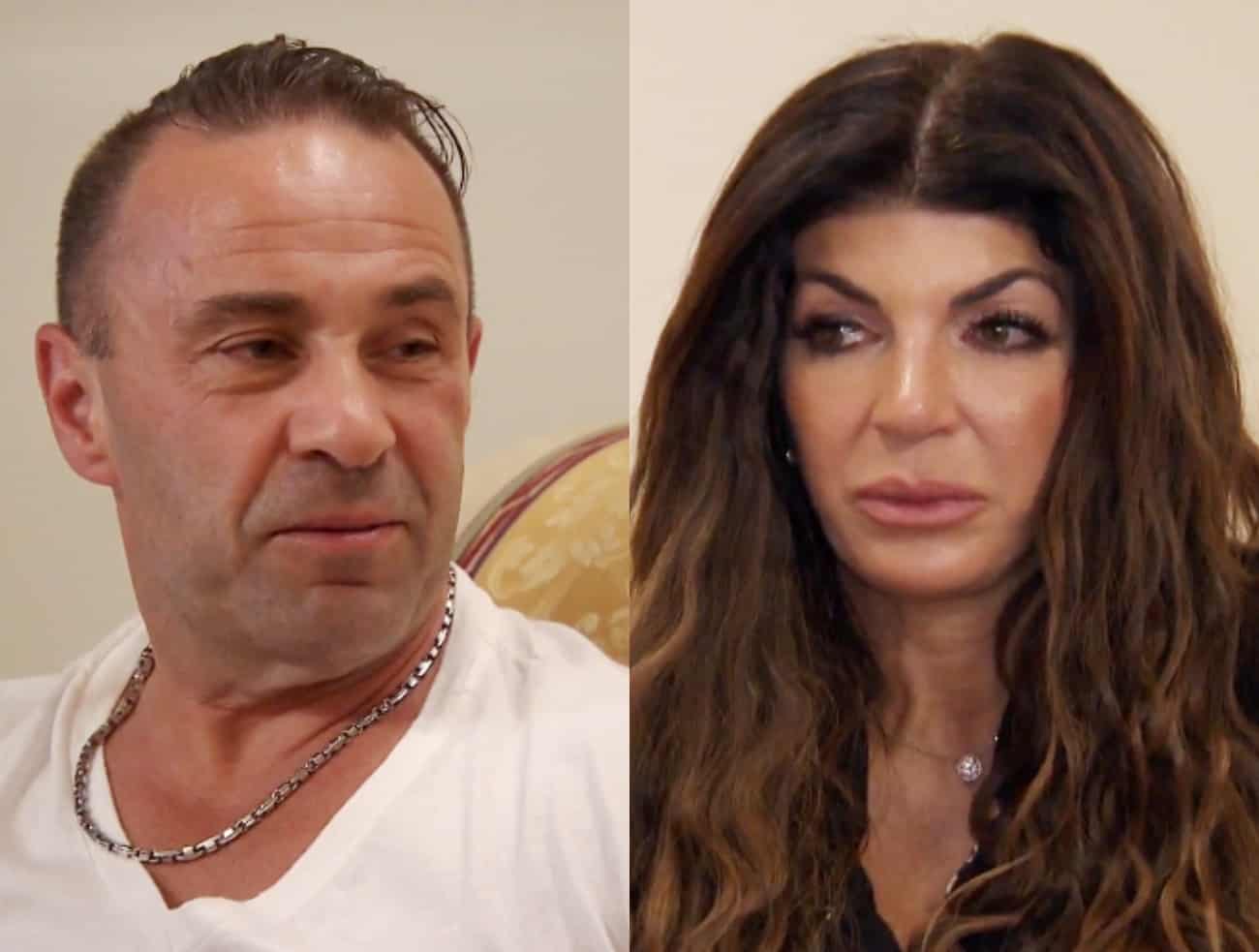 On the season finale of The Real Housewives of New Jersey, Teresa is exposed as the one who encouraged Danielle to jerk Margaret’s ponytail. The Guidice family goes to Italy to visit Joe for the first time and Teresa tells Joe she wants to end their marriage. Lots of explosive drama and tears ahead…

Melissa tells Danielle that she is going to tell Teresa about their conversation. She thinks Teresa is in a vulnerable state and that is why she would be involved in this mess. I don’t agree with that logic. Teresa has behaved this way in the past without Danielle’s influence.

We join the crew at the Jersey Shore house. Teresa is all dressed up in a silky romper wearing her ridiculous love barrettes for a backyard BBQ? Bill survived the hazing but he will not be partaking in anymore shots. Last call for Bill! Melissa arrives and everyone is dying to find out what happened with Danielle.

Melissa can’t wait to share the receipts from her sit down with Danielle. She has been waiting for this opportunity to expose Danielle and run Teresa over with the revenge bus. But more importantly, IMO, to show Teresa can be very complicit in some nasty stuff. Cough, cough stripper-gate.

Beaming with absolute glee, Melissa starts sharing what Danielle told her about the hair pull. Danielle claimed that Steven Dann got the ball rolling by urging her to pull Margaret’s hair. Margaret is not believing it. Danielle claimed she was apprehensive (sure you were) but Teresa encouraged her to “do it.”

Margaret can’t believe that Teresa, her friend, would do this to her. Melissa, who obviously believes this, asks Teresa, “Did you do that?” Teresa pleads not guilty due to alcohol impairment. She kinda sorta admits to it while not taking responsibility as she blames it on being impaired. I call bullsh*t!

Teresa’s eyes then go all wonky like her brain is short circuiting. She can’t process how to lie her way out of this one. Her silence speaks volumes. Margaret, who is absolutely incredulous over this revelation, digests this sh** sandwich and she is horrified. She can’t believe her so-called friend would not only condone but encourage violent behavior.

Margaret can’t fathom how Teresa would participate in this violent act. Margaret, check out footage from previous seasons! She calls Teresa a “f**king assho$$.”  Teresa then says, “I feel bad.” Yeah right, you do. She has a look on her face that says “I hope they aren’t going to use this” while the camera crew is zooming in. BOOM, fourth wall came down!

Super classy Teresa from Paterson then gives the bird to the cameramen. They are PAID to film your shady behavior. They document your “reality” so you can walk around in designer duds.

Once Dolores gives her opinion on what Danielle said, Teresa tosses a drink in her direction? Wow, zero respect to your faithful soldier. You were busted, Teresa, after you pledged allegiance to that train wreck Danielle. You are furious at your friend for telling you, “I told you so?”  I would have liked to see Dolores go all “Paterson” on Teresa. Dolores said earlier in the season that she would kick someone’s a$$ if they dumped water on her.

Teresa expected production to quit taping because she demanded it. She was exposed #Fraud. Teresa has to run away to avoid facing everyone #Coward. She calls producers a$$holes and tells them she is going home. Really mature behavior, Teresa. Bravo’s OGs are some really entitled women who have zero accountability. And Bravo thinks these OGs are relatable? Not even close.

Jennifer tries to talk to Teresa.  Dolores tells her to leave her alone. She thinks Teresa earned redemption because she owned it? Nope, not in my book. Teresa admits in her talking head that she was mad at Margaret. Bingo! She calls Danielle to vent about what happened. Danielle begs Teresa, “Please don’t let this come between us.” Teresa is now done with Danielle. Finally!  She is the WORST judge of character.

Teresa finally talks to Margaret on the front porch. Margaret is so troubled with Teresa’s allegiance to Danielle. Margaret needs to process this after Teresa apologizes. She is unsure if she is apologizing for being caught or for the act itself. Hmm, more likely being caught.

Dolores is still making excuses for Teresa’s actions.  Give it a rest, Dolores! Jackie (who had limited camera-time in this episode, missed you, Jackie) can’t believe how Margaret had Teresa’s back so many times and she sh** on her. I’m not surprised at all.

The party ends with the usual “where are they now?” updates, but it is happening in the middle of the episode?  That’s weird how they spliced this episode together.

We then move forward five months and we see Joe Giudice being released from ICE custody and being deported to Italy. The WWHL Skype interview with Joe, who is in Italy, and Teresa is shown. She shares she is taking the girls to visit their dad there.

Teresa and the girls fly first class to reunite with their dad in Sala Consilina, Italy.  There are clips from when the family visited this area in 2010. Joe was born in the town he is presently living in. I have to admit, Joe has never looked healthier. Living in Italy is the best thing that could have happened to him.

Even if you are not a fan of Joe and Teresa, you have to acknowledge this a heartwarming scene between him and his girls. They truly missed their dad but the interaction between Teresa and Joe is really off kilter. They do greet each other with a kiss but it is more perfunctory.

Joe is staying at his grandmother’s house. The girls get to see their extended family from Joe’s side. They join Joe’s family for a traditional Italian dinner.  It looks amazing! Yum! You can’t beat the authentic Italian food in Italy.

They head to the hotel and Milania want someones to bring their luggage up? This family with all of their designer duds and luggage is so over the top for just a weekend trip #entitled.

While Teresa is unpacking her clothes, Joe is chatting with her about the girls. He says they stress him out a little. Teresa basically tells him, welcome to my world. He forgot how stressful having four kids is.

Joe clearly expects to sleep with his wife of 20 years. Teresa feels they need to take it slow since they haven’t been intimate in four years. Joe looks disappointed that she won’t let him sleep with her. He goes back to his place looking all forlorn .

They head out to the gorgeous Amalfi Coast in the morning. Joe is trying to make nice with Teresa by complimenting her and keeps trying to touch her. She is not having it. Teresa shares she has been unhappy for quite some time. They go shopping and Teresa continues spending $$$ on whatever the kids want #spoiled.

They have another amazing meal at an Italian restaurant #foodporn. The girls can’t believe their family is together again and are happy crying.  Joe promises to keep his family together. Good luck with that!

Back at the hotel, Teresa and Joe have a heart to heart talk. Teresa comments on how much wine Joe is drinking. She wants to know what Joe expects from her. Joe thinks they can do the long distance thing and is pretty cavalier about their situation. Joe still thinks he was convicted of a bogus crime? He wants to know if it is over. Teresa can’t fathom that Joe still hasn’t taken responsibility for what he did. Me either! She ultimately tells Joe she wants to end their marriage, citing not wanting to do a long distance relationship, and he has no choice but to accept. The scene was rather raw as it appeared Joe wasn’t expecting this.

Teresa doesn’t plan yet to tell the kids that their relationship is over.  The season ends with Joe and Teresa separated after 20 years of marriage. The girls spent Christmas in Italy with their dad and he is still waiting on his appeal. Teresa is going to move on and do what makes her happy.

This has been an emotional and turbulent season for the Real Housewives of New Jersey! See you next season!