RHONJ Star Joe Giudice Slams Joe and Melissa Gorga for Telling “Lies” About Him on Reunion, Says He Agrees with Jennifer That Melissa’s “Self-Absorbed”

Joe Giudice wasn’t happy to hear all the things Melissa Gorga and her husband, Joe Gorga, said about him during the third installment of The Real Housewives of New Jersey reunion on Wednesday night.

After watching as Melissa and Gorga targeted him as a poor husband to Teresa Giudice and made it clear that they believed the many rumors claiming he cheated, Giudice slammed the couple as liars in the comments section of an Instagram post about positive things coming his way and shared a shady post about a snake.

“There is BATTLE more important OUR HEALTH to focus on!” Giudice wrote in the caption of a March 18 meme.

After a fan told Giudice that Melissa and her husband were only saying what fans have seen on RHONJ and suggested he shouldn’t be blaming them for his reality in the comments of his post, Giudice labeled the Gorgas as “phony” for lying about him on the show.

“My reality vs their words don’t match. If [you’re] going to speak about my life speak truth don’t spill lies!” he wrote. 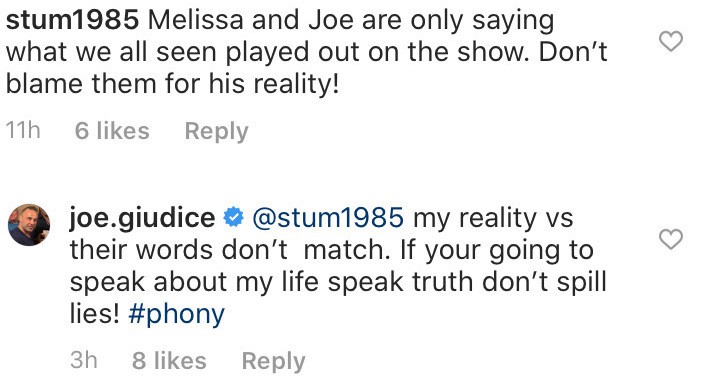 Another fan slammed Gorga as two-faced and “fake” before suggesting he wasn’t a true Christian if he couldn’t forgive his brother-in-law for his past mistakes.

In response, Giudice revealed he agreed with Jennifer Aydin that Melissa is “self absorbed.”

“Hopefully, it’s an eye opener. Jen’s words were correct self absorbed some people are when [camera] is rolling but once is a wrap is like looking for Waldo!” Giudice said.

Giudice also spoke about the 10th season of RHONJ on his Instagram Stories.

“Water throwing all Jersians know it’s going down! You mess with Jersians face and hair; you best [run] and hide under [a mountain]. True [snake] is the one that whispered in [Teresa’s ear] yep! Pay attention please! You all went down cause she bit again,” he wrote with a group photo of the ladies, giving a nod to the moment in which Margaret Josephs prompted a fight with Danielle Staub by tossing water on her amid an argument.

Giudice then seemingly took aim at the potential “snake” Melissa for failing to have true confidence and taking bread from their family.

“We all know that person the life of every party and appear to be the essence of confidence! Take an hour take to get ready to go to the store just to buy bread,” he shared. “‘Hey! Look at me! I am a fun and happy person!’ People who genuinely feel confident about themselves don’t necessarily feel the need to take away the [bread] from their family or validate it by camouflage method or [snake]!” 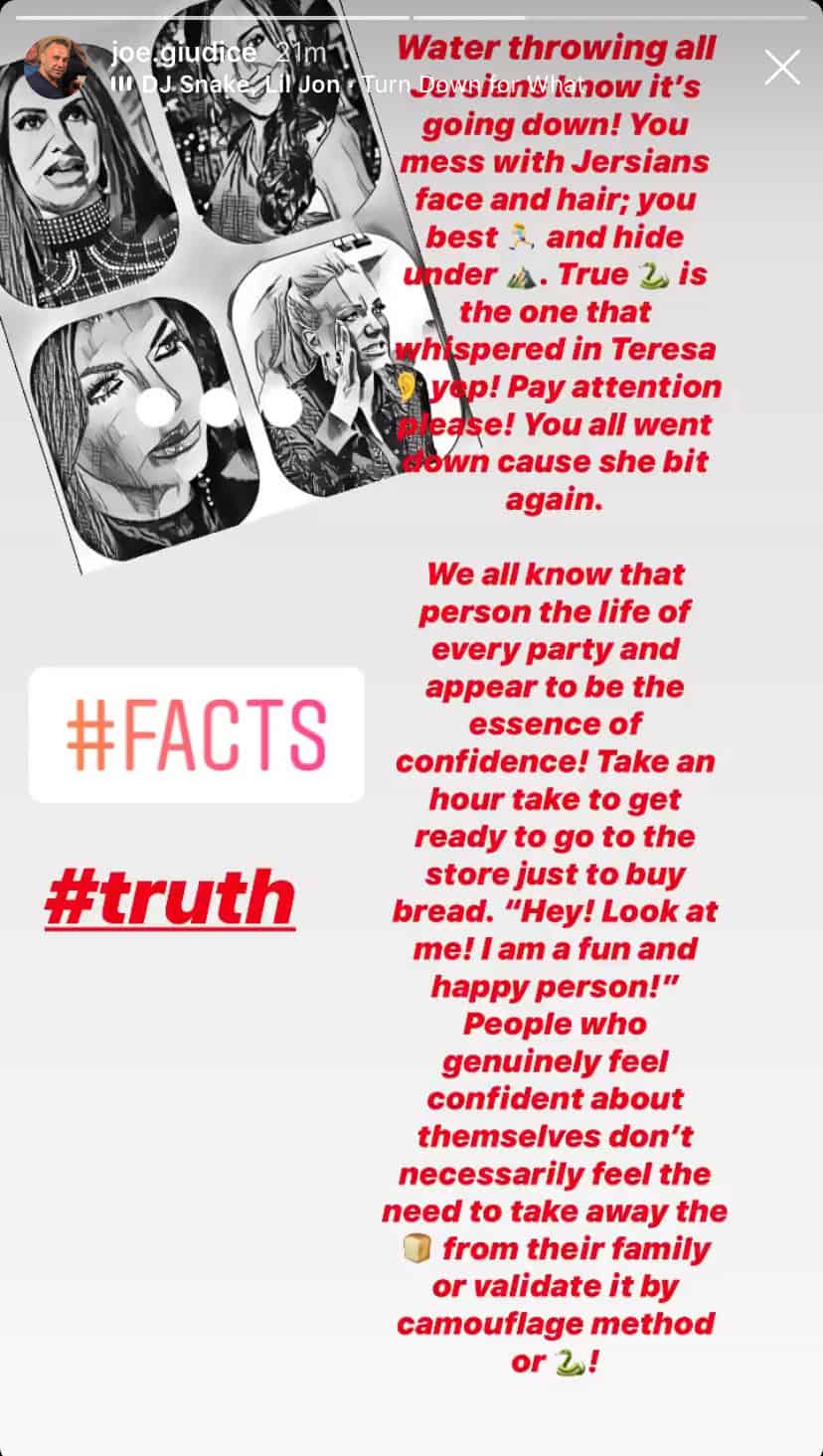 Production on The Real Housewives of New Jersey season 11 was expected to begin this month but was halted due to the ongoing fears over the coronavirus outbreak.