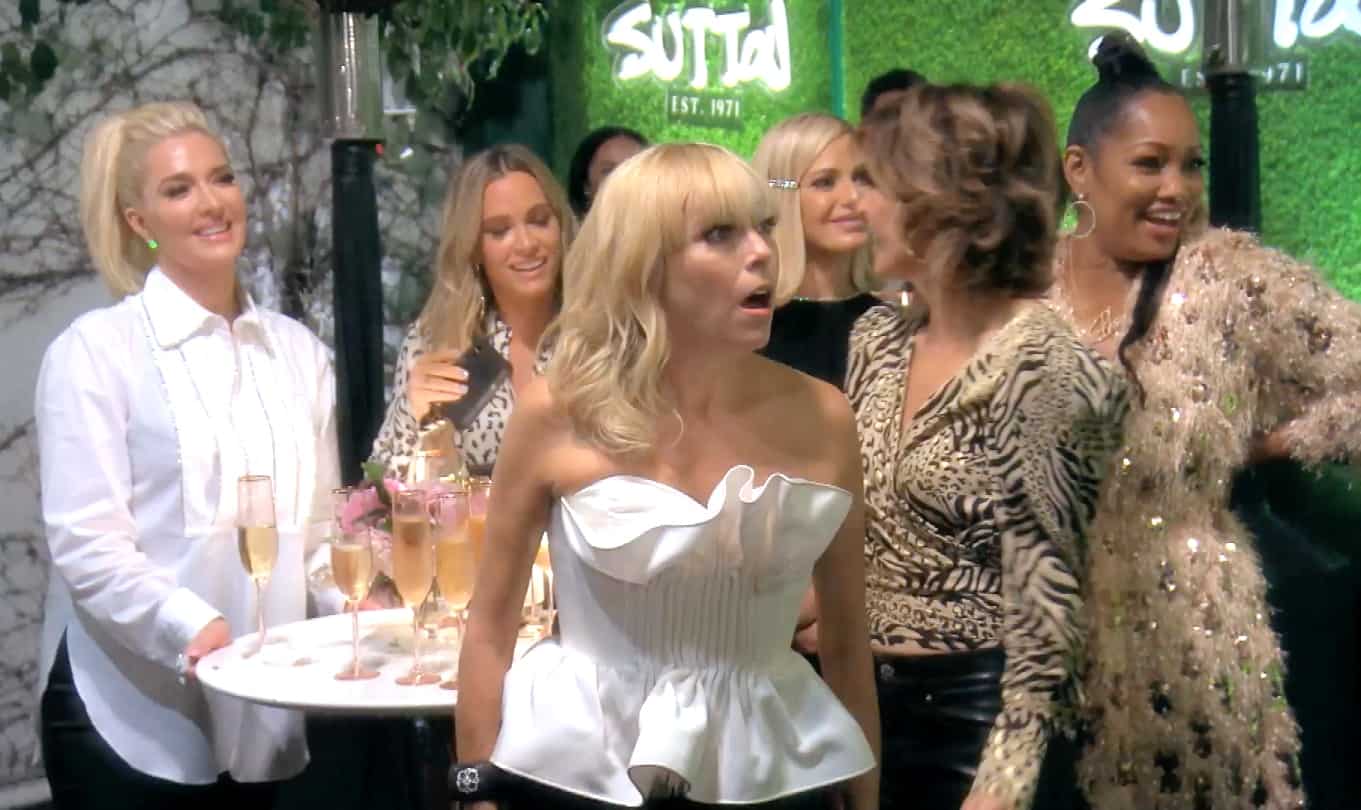 Not everyone is interested in being held “accountable” on this episode of the Real Housewives of Beverly Hills.

Dorit has moved from her palatial home. Luckily, this new $6 million house is WAY more kid-friendly (LOL) and def is their forever home. Turns out that the new house is in Dorit’s name and Dorit’s name only. I love it when PK hops in the interview to explain himself. And I really love it when there’s a double shout-out to Reality Blurb during said explanation.

Essentially, PK used to be a formidable businessman but then “the credit crunch??” (that’s what I was able to make out from his crazy accent) caused his finances to crumble. Dorit is irked that she is now mixed up in PK’s mess and has to constantly defend her hubby. When asked during their interview if they are con artists, PK simply states that he can’t spend his life engaging in negative energy. #deflect.

Garcelle is bringing her girl, Ali Landry, to her soon-to-be new crib. As Garcelle explains, it was time for her to change up her life after her divorce. Garcelle is thrilled to be starting fresh but becomes emotional discussing how her marriage fell apart. Garcelle’s husband had a five-year-long affair, and even though she went through a bumpy patch after exposing her husband through a leaked email, it is now Garcelle’s time to shine.

Rinna meets up with Teddi for a walk and talk. Rinna admits that she doesn’t think her daughter, Amelia, can cut the whole “going away for college” business over in NYC. Amelia is spiraling — between missing classes, her anxiety, recovering from her eating disorder, and because she is a child of a famous person, things aren’t looking so hot. Seems like Rinna is more concerned with how the public views HER than with her daughter not doing well at school. Teddi attempts to talk some sense into that buffoon, but it’s kinda like trying to get through to a wall.

If only Sutton knew how much Kyle butchered her name while asking for their reserved table. For a lady who made fun of everyone in sequins during fashion week, it’s funny that Sutton is rocking them for her dinner with Kyle. Kyle is still working on fashion stuff in the city and is grateful to have Sutton around to entertain her. Sutton suggests Kyle call her line “yacht wear,” as if everyone has a yacht to wear that crap to. Sutton is so out of touch with reality…

Then, Sutton explains to Kyle how awesome her life has been since her divorce. She loves doing what she wants when she wants, and that includes opening her very own store. It will be open in approximately five days and she asks Kyle to do a trunk show at her store. Best friends in the making?

Back in Cali, Denise shares with her hubby, Aaron, all of the newest Charlie Sheen drama. Charlie doesn’t wanna pay child support, so the hearing is set in November, and Denise is dreading it. Denise prefers shielding her daughters from any of the negativity Charlie may bring about, but she is having a hard time faking the pain she is in. Denise has been walking around with a hernia. As if she needs another problem in her life right now.

The new friendships on this show are hilarious. Cue Garcelle and Erika meeting for breakfast. They make small talk about their families. Garcelle shares she is going to be a grandmother — some exciting news that makes these ladies laugh out loud cuz really, who wants to be a grandma in Beverly Hills, amiright?

When Garcelle finds out that Erika’s husband, Tom, is 80, you can tell that her mind is blown. Sex is “okay,” according to Erika, but I mean, she must be doing something right cuz they’ve been married for 20 years. Garcelle explains that she isn’t dating right now, as she has a big package deal that includes two kids. In a rare moment, Erika becomes emotional while discussing Tom, but she comes back down when she decides they have to find Garcelle a billionaire hubby, too.

Teddi is holding an “accountability retreat” and has invited all the ladies. No one, I repeat, no one is excited for this invitation. I mean, who really wants to be a part of a fitness/nutrition weekend…? Certainly not these women. They don’t do fitness. That’s what surgery is for. Duh.

It’s the day of Denise’s surgery and she is very nervous about going under. She starts rambling on and on to Aaron about how she’s not ready to leave her kids, but before you know it, Denise is out of surgery and is f*cked up from the meds. What the heck was up with that whole “time-traveling” schtick!?

Erika landed a role in Chicago on Broadway! That is pretty big time. She is officially prepping for NYC and is off to take on her role as Roxie. When Tom tells Erika he is proud of her, Erika gets all sappy again and I can’t help but wonder what happened to the hard a*s from seasons past? Sheesh…whatta softie.

The next day, Denise feels pretty crummy after the six-hour procedure. Denise is lucky to have Aaron, as he is waiting on her like crazy. Makes me wonder why she would allegedly throw that all away for Brandi Glanville. LOL. When Rinna FaceTimes her, it is equal parts terrifying and painful, as Rinna is not wearing makeup and her voice sounds like nails on a chalkboard. OF COURSE Rinna wants to be sure Denise has pills to make herself feel better. I mean, do you remember her Ziploc?!

It’s the night of Sutton’s store opening and the ladies are ready to rock (minus Denise and East Coast Kyle). Rinna and Teddi are traveling together and Rinna actually comes clean about missing Teddi’s retreat. Rinna suggests that Teddi sets her expectations clearly and straight-up makes fun of the retreat. Teddi does not take it very well, despite repeating over and over that she does not care who of the group actually attends.

Sutton’s store opening party is pretty opulent. As Sutton puts it, it’s like her wedding…to herself. Not to steal Sutton’s thunder or anything, but Erika announces she will be playing Roxie Hart at that very moment. Not to steal Erika’s thunder, but Rinna reminds us that she played that role back in 2007. I can’t with that lady.

Let’s discuss Miss Couture Sutton fangirling over the mayor of West Hollywood. Hilarious. Makes you wonder, huh? As the ladies stand around chatting, Dorit lets Teddi know she can make the retreat but only for like 14 minutes, or something like that. Teddi becomes unraveled while trying to remain cool and states, “I really don’t care if ya’ll come or don’t come.” Teddi is insisting that she only wants the ladies to come if they really want to come. News flash: no one reallllllllllly wants to go. At all. Teddi is trying to explain that “everyone’s support is not going to lift her up” and now things are super awkward. So does that mean that everyone is off the hook now?