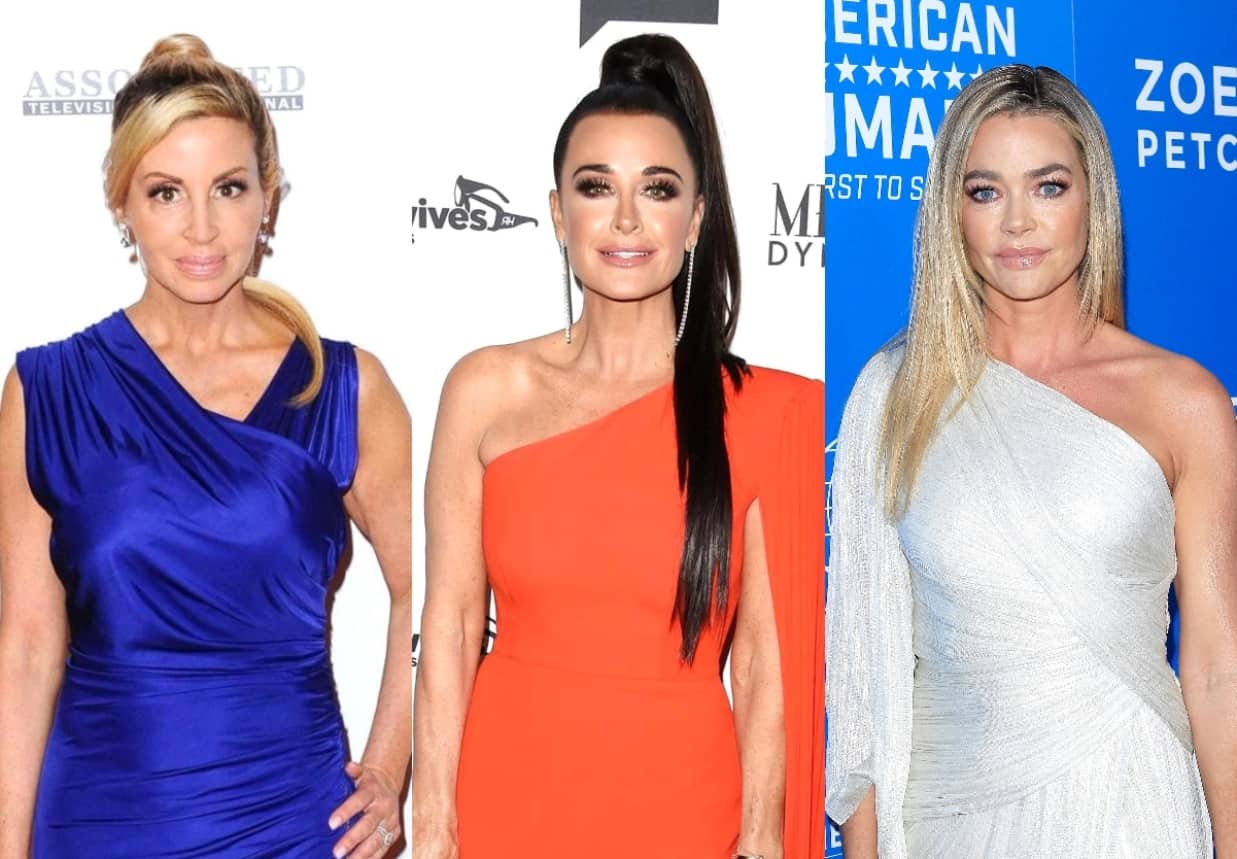 Camille Grammer is speaking out against a recent suggestion made by her Real Housewives of Beverly Hills castmate, Kyle Richards.

“Be careful….Kyle is going to the tabloids saying that Denise was having conversations outside of the [RHOBH] group…once again Kyle is deflecting by calling Denise a puppet of….you or [Lisa Vanderpump],” the fan wrote.

“I wasn’t speaking with Denise at the time of the events that aired on last week’s episode,” Camille replied. 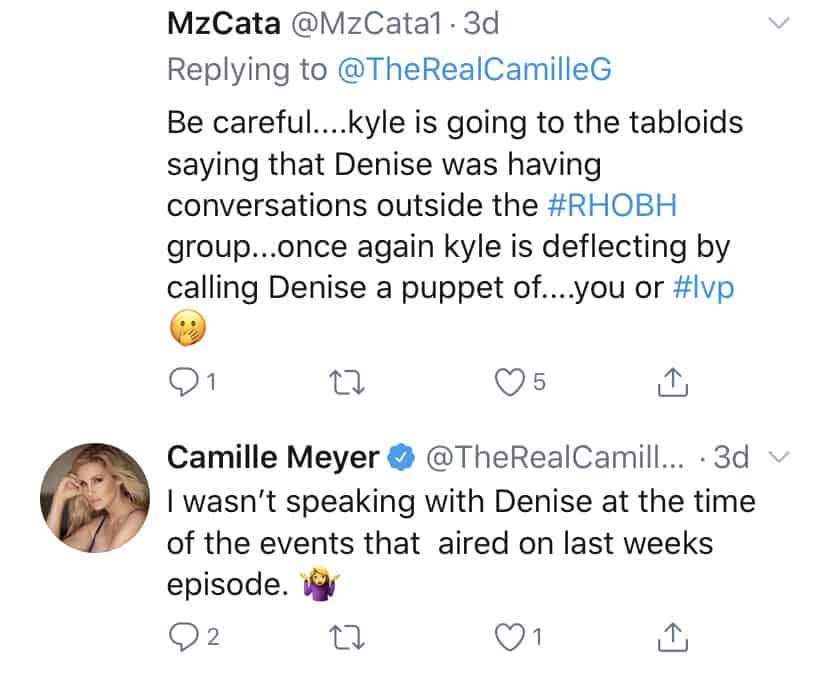 During an interview with Us Weekly, Kyle addressed her recent on-screen feuds with Denise. One of the feuds featured Kyle slamming Denise as a “ragamuffin,” which she has since apologized for. She also said she was frustrated with the drama between them because they had never argued in the past.

“I had never argued with Denise until this whole thing happened,” she said. “Honestly, I think there were some conversations happening off-camera with perhaps some former Housewives, is what I’m thinking.”

On Denise’s Twitter account this week, she shared a couple of tweets in regard to the “adult conversations” she and her co-stars have had, including the chatter about threesomes they engaged in while in front of her kids.

“I love how you are this edgy gal but also just such a good, old-fashioned mom to your kids. You have it all figured out and it’s great to see,” a fan wrote, seemingly giving a nod to the conversations Denise had with her daughter Sam after the awkward dinner party.

“Thank you. For me there’s adult conversations … and I want to be a free adult having them,” Denise explained.

“I feel like [Denise] don’t give a f**k to the extent they are describing it as,” the person stated. 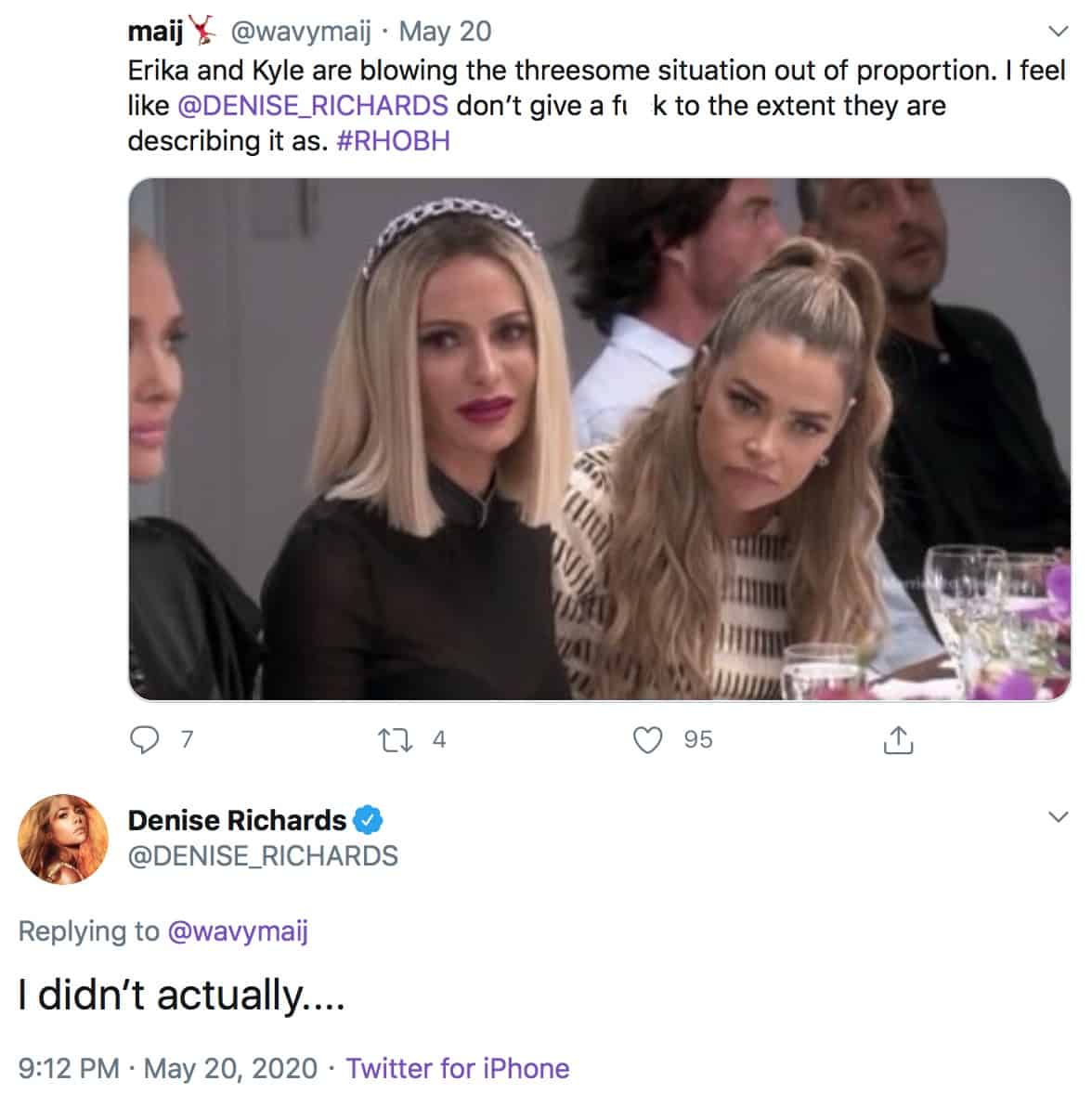 As fans may have seen, Kyle wasn’t impressed with the conversation Denise had with Sam after the dinner party. Kyle took to her Twitter page during the episode to suggest it was staged.