Home Real Housewives of Potomac News RHOP Recap: Monique Is Unremorseful When Confronted by Wendy, Robyn and Gizelle Over Altercation With Candiace

RHOP Recap: Monique Is Unremorseful When Confronted by Wendy, Robyn and Gizelle Over Altercation With Candiace 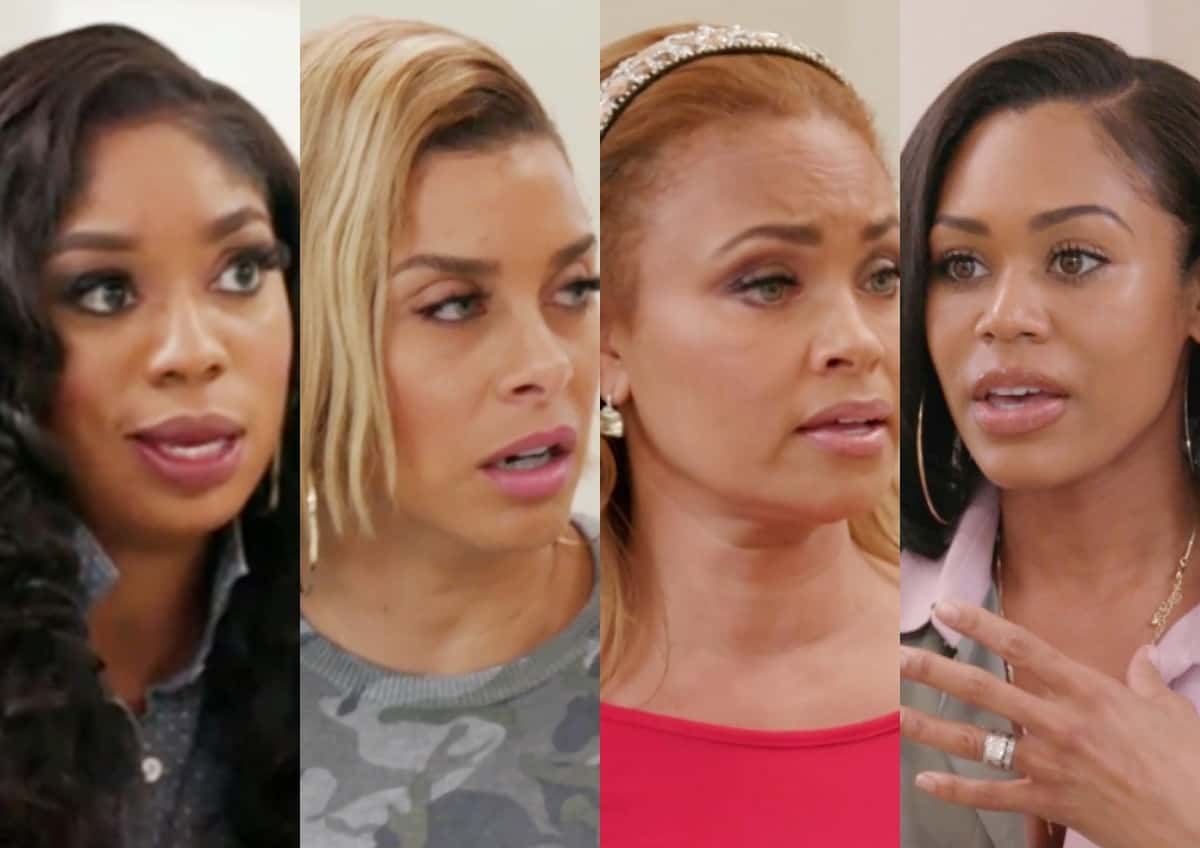 On this week’s episode of the Real Housewives of Potomac, will Monique be remorseful for her actions against Candiace? Will Karen be able to help facilitate a peaceful summit between these two warring housewives? Let’s see if the impossible can happen!

We are now five days out after the fight at the winery. Candiace is still processing what went wrong with the situation with Monique, who was like a sister to her. She has no idea what caused things to escalate to that point. Sure you don’t! Not buying what you are trying to sell, Miss Candiace!

Monique shares with Chris that she wants Karen to gather the other ladies, minus Candiace, to discuss what transpired. He thinks she is stressed and that contributed to what happened. Monique has a plan to move things forward and wants to share it with the group, and Karen agrees to host a pow-wow since she considers her house a safe place. Now that is really a good friend who offers up her home. She better batten down the hatches, hide the stemware, and increase that liability insurance!

Karen has to make the call to Candiace about the ladies coming over. She wants to know if she wants a voice so her side is heard as well. Candiace doesn’t appreciate that Karen is extending such grace to Monique. She shares that the other ladies are basically on her side and agrees with her that Monique is a dangerous person.

Robyn arrives on time? I am already shocked and the meeting hasn’t even started! Gizelle arrives with her own personal security guard, KB. Are you kidding me right now, and how did that large man fit in her Mini-Cooper? Gizelle doesn’t want to be associated with this type of behavior and thinks it is a wise move to provide security so there can’t be a wig snatch. Ms. Bryant wants no Google searches on her acting badly but I assure you there will be lots of stuff on Pastor Jamal.

Ashley brings poor baby Dean to this since she can’t get a sitter? Now there is a job for KB — he can be there to protect the baby! Why would you subject a little baby to this dysfunctional situation? Ashley starts off by saying that she spoke with Monique and she expressed some regrets. You can tell she and Karen are willing to give Monique another chance.

Monique calls Chris on the way there and is afraid the ladies have already made their minds up. He is upset his friendship with Chris B. is going to be in a bad place now. I hate hearing how sad he sounds over all of this mess.

Wendy arrives and she is expecting this to be a brave and honest space. She and Robyn are upset over a story on a blog (Editor’s Note – RHOP Producers used Reality Blurb’s headline with a story that was written by another website), which just so happens to be our site! Woo-hoo! Robyn thinks this story is so one-sided and it must have been leaked from Monique’s camp. Wendy thinks it is her mission to fight for the rights of black women, and she doesn’t like that black women are perceived to be angry and violent. Ashley asks, “Do we hold men to the same standard?” Good question, Ashley!

Candiace visits Dr. Ken, who is a therapist, to discuss what happened with Monique. She has gone to him in the past over her mama drama. Dr. Ken wants to hear her version of what transpired, and he gets her to admit she was engaging her. Candiace tells him that she kept saying, “Are you going to drag me?” Candiace downplays her involvement and is not being totally honest about agitating Monique. She feels very unsafe around Monique since it escalated into a brawl so fast.

Monique arrives, looking a little nervous walking into the lion’s den. She apologizes for how she reacted and is embarrassed. Monique wishes she didn’t allow Candiace to get under her skin and that she lost control. When she says, “Anyone can lose it when they are provoked,” Gizelle stops her at that point and acts all self-righteous. Would someone please tell her to get off her high horse?

Gizelle decides to take notes on her phone on what Monique says. Why, is she the stenographer? Monique claims after the wine hit her in the face she blacked out. She heard Candiace yelling out, “She is a ghetto a*s b*tch” while she was out in the stairwell, and her anger was reignited. Production shadily shows Monique telling a different story to a production assistant while in the car going home. Sorry, just saying, they love to bust you when you aren’t being honest!

Robyn has to confront Monique on part of her story being a complete lie. I guess she is used to apologies that have no merit? Robyn thinks the sequence of events that Monique described is factually incorrect. She also questions her leaking her version of events to the blogs. Monique denies leaking the story to the blogs. She claims she only talked with one person who happened to be a blogger about the wine glass. Robyn thinks her team shared this story. Wendy thinks her reaction is a bad look for black women. She doesn’t like that Monique perpetuated the negative and inaccurate stereotype of an angry black woman.

Across town, far, far away, Candiace claims to Dr. Ken that she has been pummeled on social media. Wow! Some of those comments production showed are pretty vicious. Candiace can’t understand why she isn’t getting the sympathy that she had expected. She won’t own up to anything she did to provoke the reaction. Dr. Ken asks about Monique’s claim of betrayal and Candiace doesn’t feel she did her wrong. Candiace thinks it will take time to forgive her and she has nothing to say to Monique at this point.

Ashley, who didn’t actually witness it, appreciates that Monique took ownership. She thinks she deserves a second chance. Gizelle is not feeling the apology since Monique has said things on camera in the past before to hurt people. She threatened to drag Candiace last season and now she has done it. Gizelle shares that she talked to her girls about this and they don’t want their mom around Monique nor their Dad. I guess she didn’t take their advice on that one, though. IMO, Gizelle was gunning for Monique and didn’t offer anything to this sit down other than to provoke ANOTHER reaction from Monique. Me thinks Gizelle still holds a grudge against Monique for sharing her ex-boyfriend Sherman Douglas‘ past indiscretion on the show.

When did Robyn become the head b*tch? She thinks Monique is being condescending. Karen takes control of the situation and tells the ladies to lower their voices. She wants Monique to be accountable and find out why she lost control. Karen is calling her out and thinks she needs to address her anger issues. Monique wants to talk to her pastor to get some guidance.

Wendy has her turn to tell Monique that she doesn’t think she is remorseful. She thinks being embarrassed is a selfish reaction. I do think that was a pretty astute observation. Gizelle thinks she is a liability and has zero respect for her. She gets up to leave and Monique basically says “good riddance” to her. I don’t want to hear advice from GIZELLE on what a good example is on national television. Gizelle then claims she and Jamal have an image to protect. LOOOOOL! She needs to back up and take a good look at her façade of a relationship with Jamal, and frankly, her fashion choices too while she is at it!

Monique wants them to pray for her and she feels that words can hurt as bad as being physical. Wendy shares that there have been very nasty things said about her and her kids and she has never gotten physical. She uses words to disarm people, not violence. Wendy and Robyn want to know why there have been no apologies to Candiace? It then gets loud and Karen asks Wendy to take it down a notch.

Karen, IMO, is the one who really seems to try and resolve the situation. Monique thinks maybe being a part of this show isn’t a good thing for her anymore. To me, it is plainly obvious, it is more about what was done and said behind the scenes. There was a simmering pot of anger from what has been left off the show, which we now know involved a very ugly and false rumor questioning the paternity of Monique’s son Chase.

Ashley thinks Monique needs a time out, and take Michael with her! Robyn denies she would get violent even though Candiace is annoying as h*ll. Monique asks to hold Dean and Robyn thinks she is kissing babies to try and redeem herself. I think a baby can be soothing and comforting. Not agreeing with Robyn’s assessment that Monique is behaving like a politician.

Karen is really impressing me this season and being a good friend. She will be her soldier but wants her to own her behavior. Monique still wants Candace to be accountable for provoking others. Ugh, so do we.

Wendy and Robyn are not feeling Monique’s apology, and they think she will repeat her actions since she is not remorseful. The fight between Candiace and Monique was like an atomic bomb, but the aftermath has caused such divisiveness, can they all recover?

We then see the previews for upcoming episodes where the ladies head to Portugal. Jamal misses the flight, how convenient! Michael is up to no good again. Candiace might want Monique to go to jail. Michael and Chris B. get into it. Oh my, this season is really bonkers! Have a good week, everyone, and be safe!