Home Real Housewives of Potomac News RHOP’s Monique Samuels Leaks Email From Candiace Dillard’s Attorney and Accuses Her of Wanting Money Over an Apology, Jokes About Carrying Show on Her Back

Monique Samuels leaked a letter sent to her by Candiace Dillard Bassett‘s attorney, James Walker Jr., as the latest episode of The Real Housewives of Potomac aired.

As Candiace was seen meeting with a prosecutor in regard to her physical encounter with Monique, Monique took to her Twitter page, where she shared a screenshot of the letter, which threatened civil action, before joking about the way in which she’s carried season five on Instagram.

“After I had the meeting with my pastor, I received this email,” Monique tweeted on October 18. “My attorney advised that I only speak to Candice with him present. We asked several times for a mediation sit down and she and her attorney REFUSED. She didn’t want to hear an apology! She wanted money.”

Along with her screenshot, Monique pointed out that in addition to informing her of her plan to file a complaint, Candiace also threatened a lawsuit through her attorney. 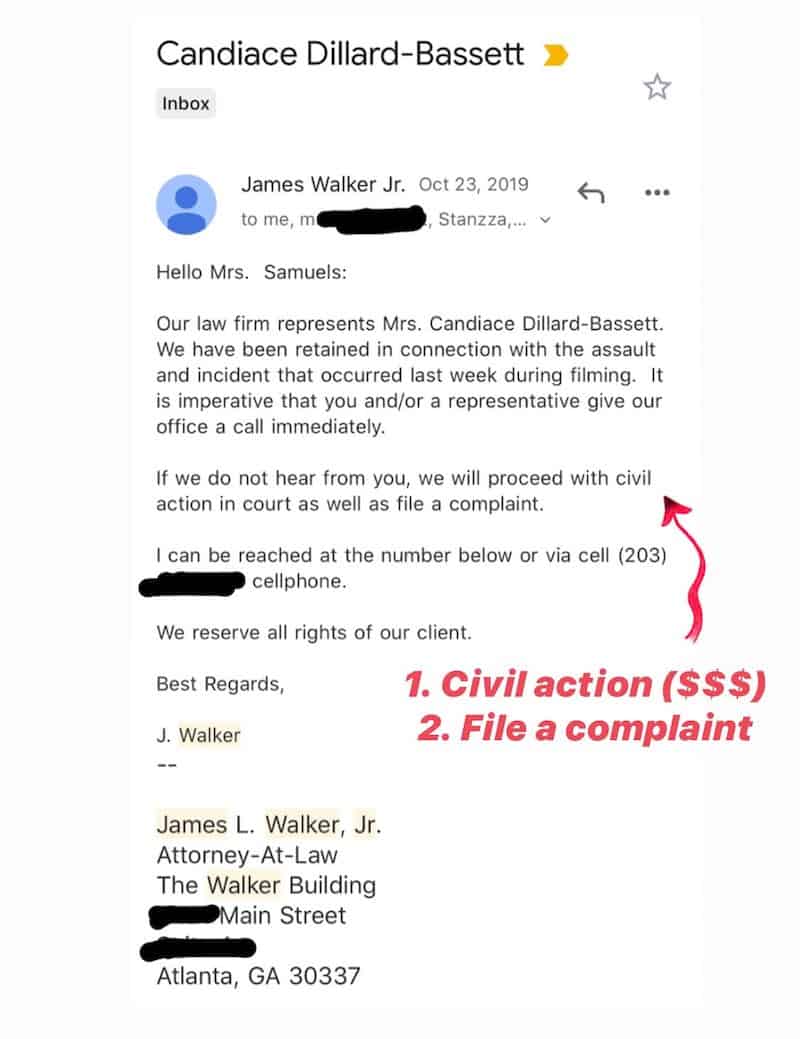 Monique appeared to be responding to a recent interview during which Candiace shared that Monique had still yet to reach out to her since their altercation.

After sharing the screenshot, Monique posted another couple of Twitter posts in which she further explained the events that followed her altercation with Candiace.

“When my attorney said no we’re not paying her anything because this was not an ‘attack’ or an ‘assault’ but a ‘mutually consented’ altercation (a warning to back up was given followed by her egging on by saying ‘what you gon do? You gon drag me?’), her attorney’s response was… ‘Well we’re going to sue Monique for MILLIONS and bravo will capture it all!'” Monique alleged. “Then they filed the complaint. Then I countered. Then the state threw both charges out. The End.”

In other RHOP news, Monique recently responded to a fan on Instagram who suggested she was carrying the season.

“Is your back okay from carrying the girls and this season on your back????” the fan asked.

“I have a standing massage appointment every Monday,” Monique replied.