Home Real Housewives of Orange County News RHOC’s Ryan and Briana Culberson Are Moving Out of North Carolina as Vicki Gunvalson is Also Selling Her Lake Home in NC, Vicki Explains Home Sale Plus Why Briana and Ryan are Relocating

RHOC’s Ryan and Briana Culberson Are Moving Out of North Carolina as Vicki Gunvalson is Also Selling Her Lake Home in NC, Vicki Explains Home Sale Plus Why Briana and Ryan are Relocating

Vicki Gunvalson‘s daughter, Briana Culberson, and her husband, Ryan Culberson, are preparing to move to Chicago.

After spending the past few years in North Carolina with their sons, Briana and Ryan are listing their family home as the former Real Housewives of Orange County star, who purchased a lake house in the area last summer, also prepares to vacate the area.

“90% of her family is in IL and we’re tax-exempt in the state so why not give Chicago area a shot!” Ryan announced on his Instagram page on January 25. “Keep the negative comments to a minimum this is a positive family calculated decision.”

According to Ryan, his mother-in-law was very much a part of their family’s decision to relocate to the Midwest and has actually put her lake home on the market already.

“That being said [Vicki Gunvalson’s] lake house is for sale and ours will hit the market the second week of Feb. Contact [Daniel Byrd] for either property details!” he added.

Following Ryan’s announcement, he was met with comments from fans, many of whom expressed shock at his seemingly sudden decision to move out of North Carolina.

“Wow, shocked you just mentioned in a live last week you bought more property and weren’t leaving. Wish you guys the best of luck…” one person wrote.

“We have a property we will hold onto here but that is a savings account property. Just our current property and the lake house will be for sale,” Ryan replied. 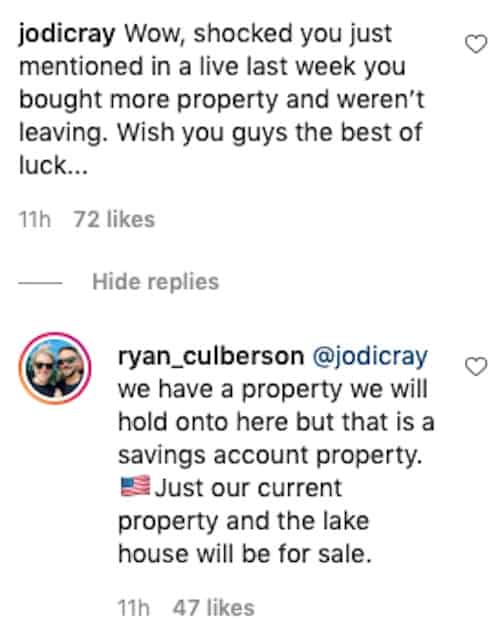 Vicki also spoke out in a comment, saying that while her property on the lake was a great investment, she’s ready to move on.

“It was a great short term investment house to flip – time to move on from it,” she shared.

Since leaving RHOC years ago, Briana has done her best to raise her children away from the spotlight.

“I don’t feel like making my daily life public,” Briana said. “It’s complicated by me being an ER nurse and my mom being on tv, but just comes down to me simply wanting to be able to share pictures of my kids and my day and feel safe and comfortable.”