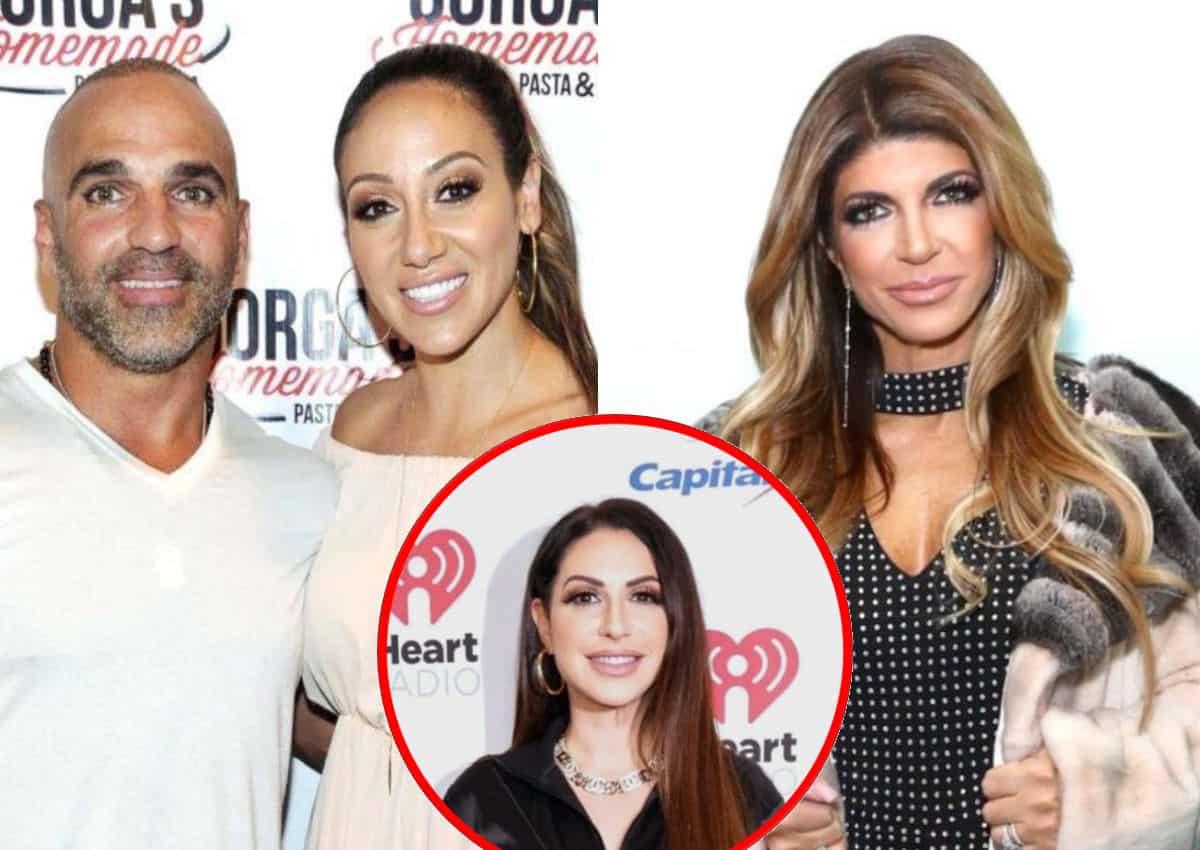 Melissa Gorga reveals whether she and her husband Joe Gorga are considering a divorce as she discusses the “stressful” upcoming drama between Joe and Teresa Giudice on Real Housewives of New Jersey, and epically shades Jennifer Aydin.

Melissa and Joe’s marriage troubles will likely be one of the biggest storylines coming up in the second half of season 11. Though the show’s editors initially duped the fans into thinking Melissa was texting with another man, which turned out to be a joke, it seems the couple’s marital issues really did play out in front of the cameras.

Back in February, Star magazine reported the couple was actually considering a divorce.

In a recent interview, Melissa revealed that things are better now between her and Joe, but she was asked if they considered the D-Word while they were fighting through what she calls the “lowest” point in their marriage.

“I don’t know how seriously it’s come up,” she said on Access Hollywood’s Housewives Nightcap. “Have we, like, brought it up and gaffed about it? Probably, yeah. But never anything that we – nothing’s ever happened to us other than these highs and lows. I’m probably a little more busy than I’ve ever been, and that affects him, and he admits that there’s insecurities with that. You know, men don’t necessarily understand that [women] don’t need you… we want you.”

As teased in the season 11 trailer, viewers will see Joe and Teresa have an extremely intense argument with Melissa seemingly taking her husband’s side. The Envy Boutique owner said that it was a horribly traumatic moment for everyone involved, and it made them all flashback to the early RHONJ days when they were embroiled in a serious family feud.

“We haven’t felt like this in a very long time and it gets very real when it’s about the [family] and it makes us – it hurts. You remember how it felt and how stressful it is, you know? That’s the worst. I hate when it goes into that. I really do.”

Melissa went on to say that sometimes she feels like she deserves more credit for the way she’s navigated her way through all the Gorga drama.

“I have married into this, okay,” she quipped. “Not only do I have Joe, but I’m now working – kind of – and being with my sister-in-law all the time. So I’m not asking for an award or anything, but I’m just saying. It’s not always easy to balance that strong personality and they have personalities that they’re very set in their ways. They’re great people, they’re good-hearted people, but it’s just that what they believe, is what they believe. And that’s difficult to kind of maneuver around all the time.”

As for Melissa’s thoughts on co-star Jennifer Aydin, she made it rather clear that she doesn’t like the mother-of-five judging by her snarky comments.

“I think she’s such a wannabe, I cannot with her,” Melissa quickly declared. “She goes from like, ‘I don’t drink,’ when she first came around, like, ‘Oh, I don’t do that,’ and, ‘I wear high-neck things around my in-laws’ to like, sloppy drunk all over the place. And you know me, I’m the first one to have a good time and I would never judge anyone. But I definitely feel that she’s just one of those people who, like… she’s just not real! Sorry! She’s just not real. There’s a lot of kissing Teresa’s butt going on. She says, ‘I’m loyal,’ but you can be loyal and have an opinion.”

“Get a backbone,” she continued. “I can’t with her. She’s such a wannabe. Lately I hear she loves to, like, come out and say that Joe should be the Housewife. Meanwhile, this woman hasn’t talked about herself once. It’s about her brother, her other brother, the brother’s marriage, the parents… Do we know something about you? Because you haven’t said one word about you yet, so take a seat.”

Then, Melissa delivered what her interviewers deemed a mic-drop worthy moment as she claimed Jennifer is trying to be “fun” like her, but “epically failing” at it.

“I’ll never forget her telling me that she was inspired by me,” she snarked. “She’d be like,’ Oh my gosh, you’re so fun and you drink and you’re so much fun.’ And I guess she’s trying to do it, but she’s epically failing. I’m actually fun, like, assertively fun, and I don’t know what she’s doing on the floor and banging her head. You’re doing it wrong!”