Home Vanderpump Rules Jax Taylor Owes Over $1.2 Million In Taxes After Alleged Firing From Vanderpump Rules, See the IRS Lien Against Him As He And Brittany Cartwright Prepare To Welcome Their First Child

Jax Taylor Owes Over $1.2 Million In Taxes After Alleged Firing From Vanderpump Rules, See the IRS Lien Against Him As He And Brittany Cartwright Prepare To Welcome Their First Child

As he and his wife Brittany Cartwright prepare to welcome their first child in the coming weeks, the former Vanderpump Rules star is indebted both to the state and the IRS to the tune of over $1.2 million.

In federal documents obtained by The Sun on April 2, it is revealed that Jax is facing an overdue balance of $868,035. Meanwhile, in state documents, it is confirmed that Jax owes an additional $316,571 to the state of California.

On January 14, an unpaid federal tax lien was filed against Jax. However, as The Sun explained, his history of failing to pay his taxes dates back to 2014, when he neglected to pay nearly $23,000 to the IRS. Then, in 2019, the same year he and Brittany purchased a $1.9 million farmhouse (you can see photos here) in the Valley Village area of Los Angeles’ San Fernando Valley, another $646,867 was tacked onto his outstanding debt.

Below is a screenshot of Jax’s federal tax lien, via Blocked by Jax on Instagram. 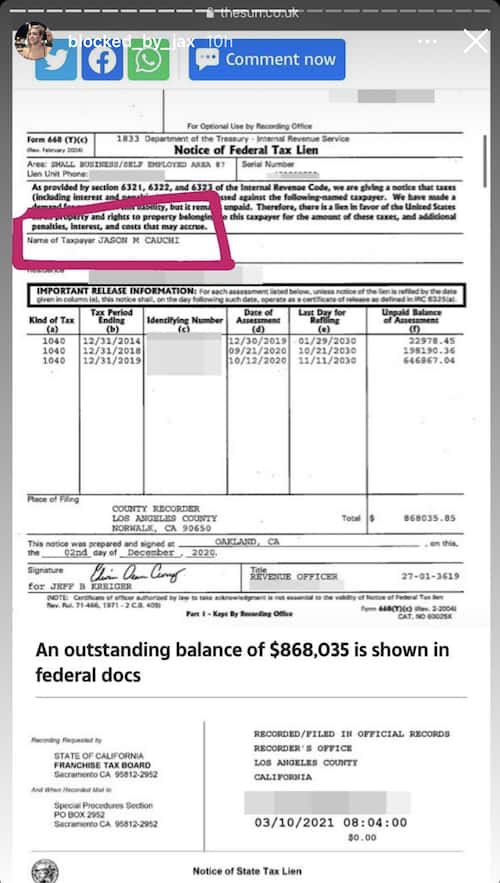 If Jax continues to fail to get caught up on his back payments, the balance pending against him will continue to increase with interest and other fees.

Although Jax’s salary for Pump Rules was never confirmed, he was once reported to be the highest-paid earner on the show with a supposed salary of $25,000 per episode. So, with each season including around 24 episodes, that would mean Jax, who announced his exit from the series in December 2020, will be missing out on more than $600,000 per year.

Around the time that Jax and Brittany confirmed they would not be included in any further seasons of the Bravo reality series, rumors suggested he was actually fired for his allegedly “racist and transphobic” past comments.