Home Real Housewives of New York City News RHONY Season 13 Premieres to Low Ratings and Drops by Nearly 100,000 Viewers With Episode 2, Find Out How Many Viewers Tuned in After Dorinda Medley’s Exit

by Lindsay Cronin May 13, 2021 230 comments
ShareTweetWhatsappPinterestRedditTumblrMailFlipboard

The Real Housewives of New York City premiered to less than one million viewers earlier this month.

Following the returns of Ramona Singer, Luann de Lesseps, Sonja Morgan, and Leah McSweeney and the addition of Eboni K. Williams, fans are seemingly losing interest as they call for the returns of former cast members Dorinda Medley and Bethenny Frankel.

According to TV by the Numbers, the premiere episode on May 4, titled, “Back in the Big Apple,” brought in 960,000. Then, the following week, episode two, which was titled, “Burning Up,” captured just 870,000 viewers.

Meanwhile, last year’s season 12 premiere in April was watched by 1.09 million viewers, and the finale episode in August captured 1.12 million. Season 12 only saw less than 1 million viewers once, and the highest-rated episode of the season brought in an impressive 1.33 million.

On Instagram, a number of RHONY fans weighed in on the ratings news after Christian Gray Snow shared a message about the low numbers and suggested Leah was to blame. 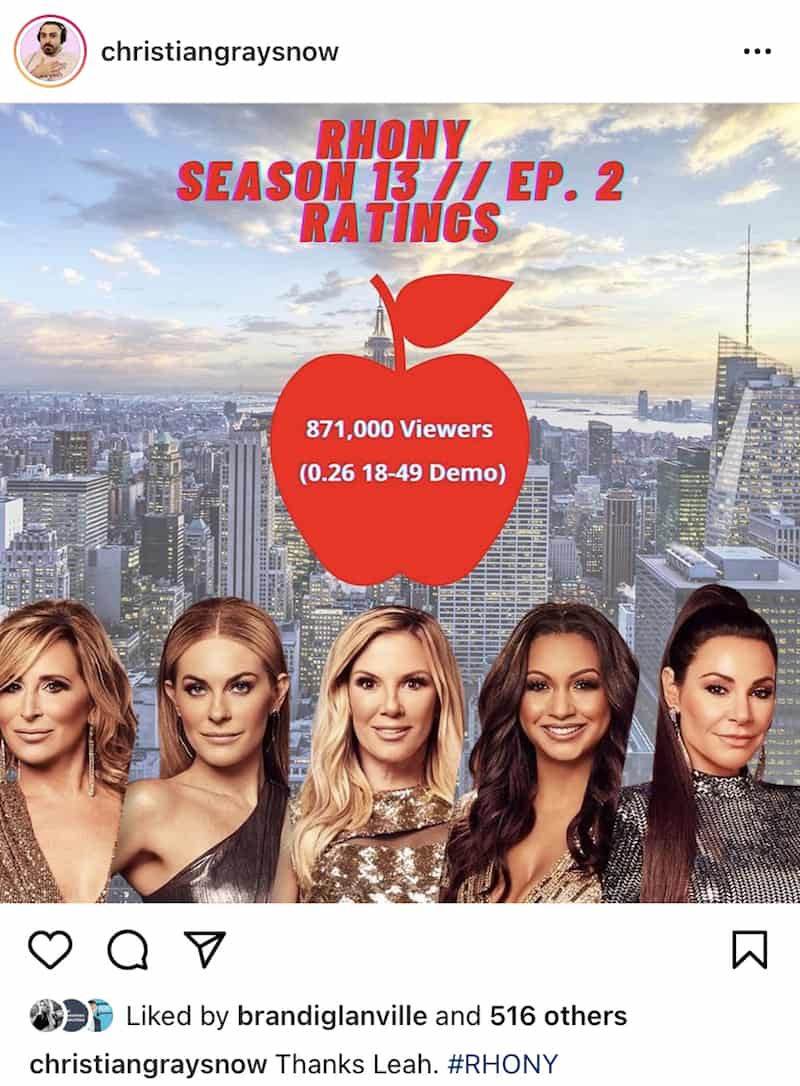 In the comments section of Christian’s post, several social media users admitted they weren’t happy with the newest members of the show. They suggested Bravo bring back Bethenny, who announced her exit in August 2019, and Dorinda, who confirmed her departure the following year.

“See Bravo!! We don’t want young and fresh. We want old and crazy!” one person said.

“Weird dynamic trying to mix the young and old- seems too forced for them to all hang out together,” another noted.

“They need B and Dorinda. Sorry not sorry,” wrote a third.

Another RHONY fan said that while they “really wanted” to like the new season, they found themselves “missing Doooorinda.”

“It’s so bad without Dorinda,” someone agreed.

“I think they need to learn if it isn’t broke. Don’t fix it,” another person added.