Home Real Housewives of Orange County News RHOC’s Emily Simpson Claps Back at Braunwyn for Dissing Her, Reacts to Heather Dubrow’s Return, and Hints at Rift With Shannon Beador? 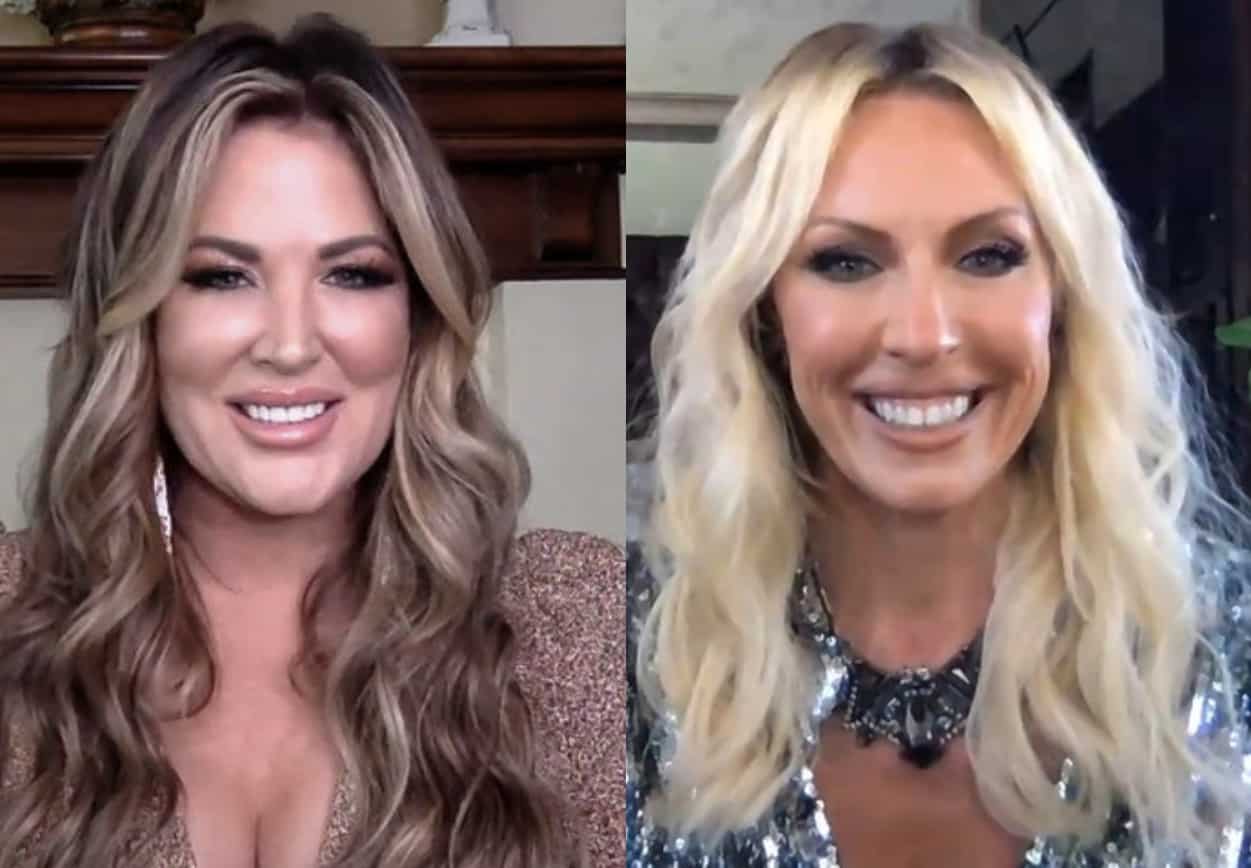 Emily Simpson fired back at Braunwyn Windham-Burke on Monday night during a Q&A with her fans and followers on her Instagram Story.

After Braunwyn, who, along with Kelly Dodd and Elizabeth Vargas, was fired from The Real Housewives of Orange County last week, suggested Emily should have been the one to go, Emily slammed the mother-of-seven as a “fraud” before reacting to Heather Dubrow‘s season 16 return and more.

Days after Braunwyn told Entertainment Tonight that she found it “weird” that Emily, who she shaded as “Eeyore,” wasn’t axed, and noted that she was “like watching paint dry,” Emily poked fun at her former castmate’s exit.

“Fraudwyn can run her mouth all she wants… but she’s still fired and still unlikeable,” Emily told a fan who wanted to hear her thoughts. 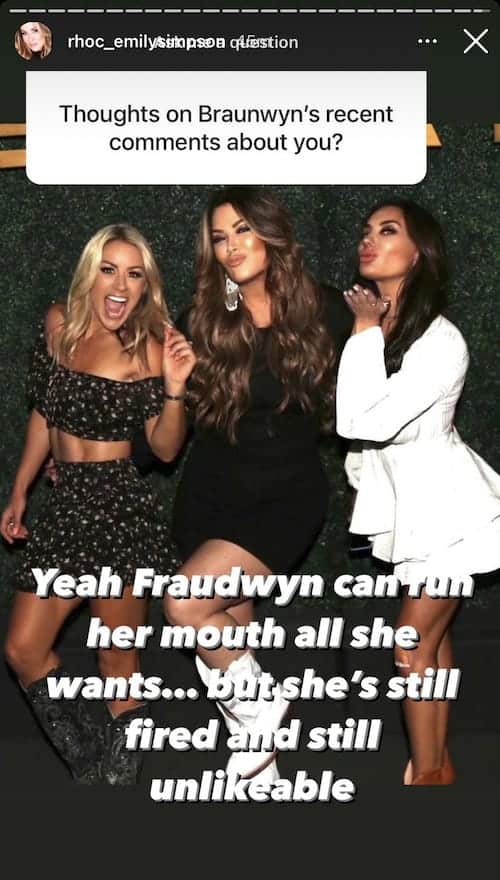 “Have you ever met Heather Dubrow before / are you excited to work with her?” a second fan asked.

“I have not met Heather… but I’m looking forward to meeting her and forming a completely unbiased opinion of her based upon our interactions and not everyone else’s comments etc,” Emily replied. 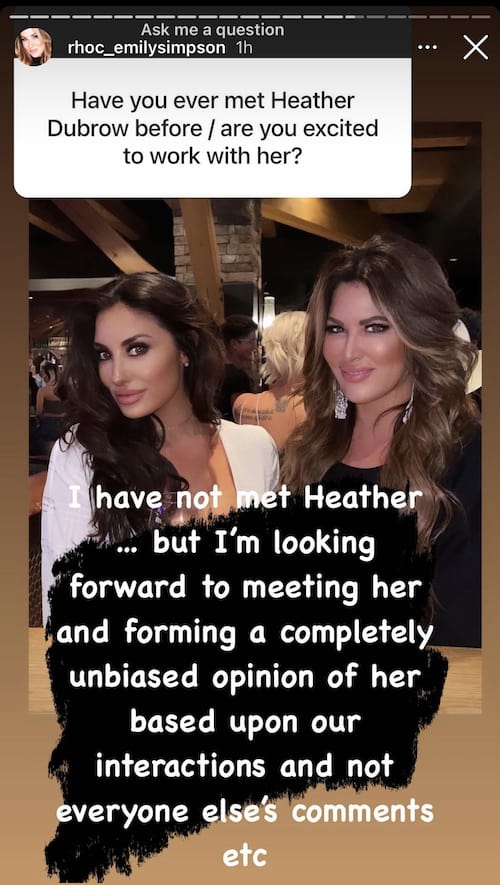 A third fan asked Emily if she was “excited about the upcoming season of RHOC.”

“Yes! Very much!” Emily confirmed. “Plus we will be filming in the summer time in OC so that’s a really cool thing.” 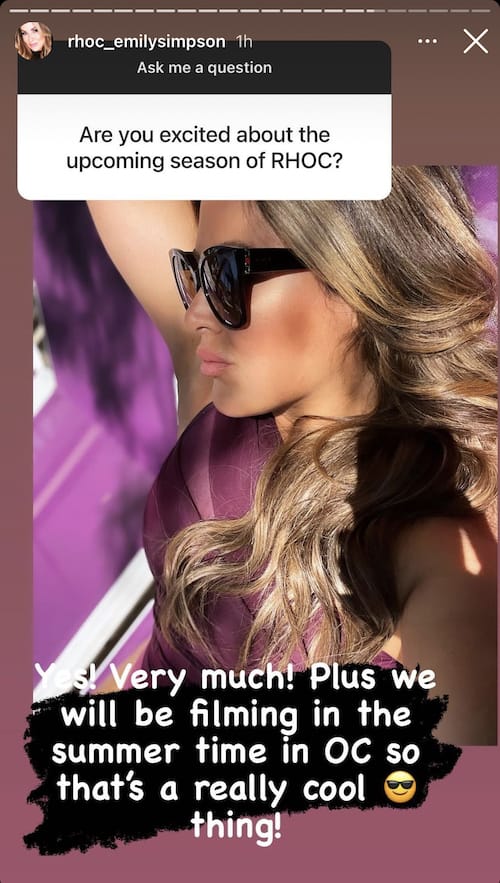 Another person wanted to know if Emily was still in touch with Shannon Beador and Gina Kirschenheiter.

“I talk to Gina almost every day!” Emily revealed, seemingly admitting that she and Shannon, who feuded over comments Emily made about the “Tres Amigas'” age, have not spoken. 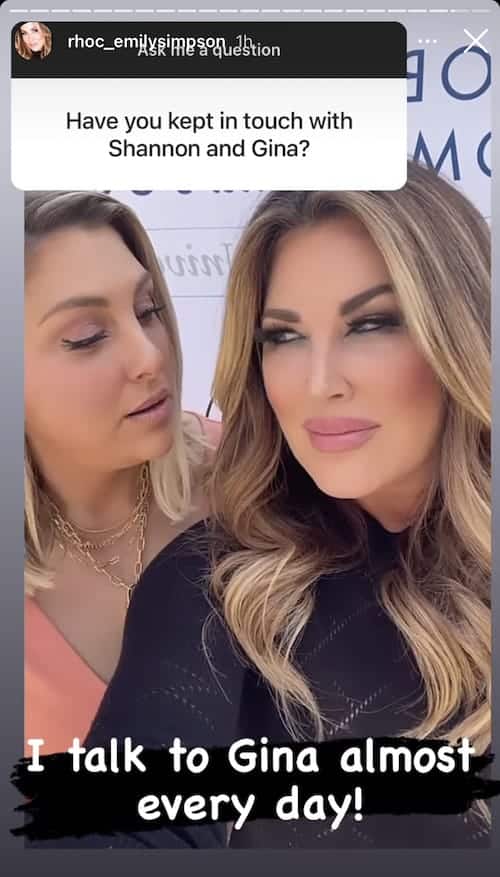 Also on her Instagram Story, Emily shared her “top tips for a happy marriage,” which included taking one’s “commitment seriously,” remembering there will be “ups and downs,” and going to therapy.

Emily also advised her online audience to “carve out date nights regularly” and “do kind things for one another” before noting that “holding grudges” can be “toxic” to a relationship. 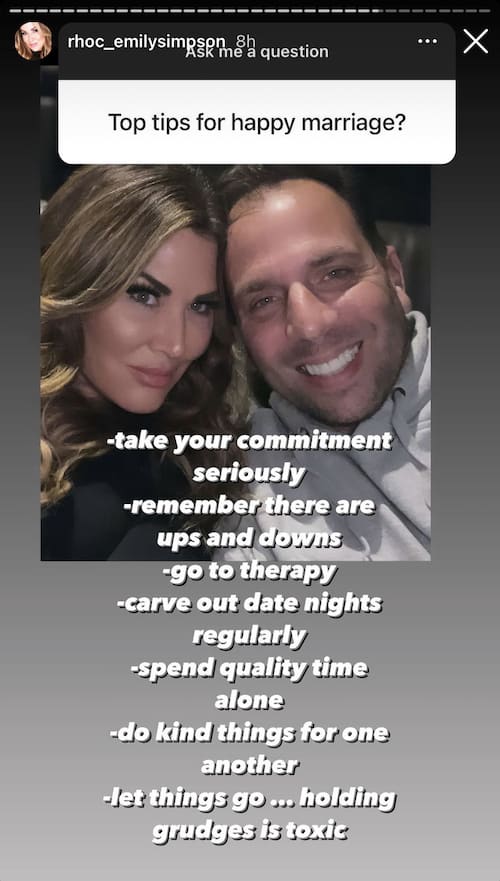 The Real Housewives of Orange County season 16 is expected to begin filming in July.