RHOBH Recap: Erika Calls Ex Tom “Mean” and “Possessive” and Admits He “Funded” Her Lifestyle; Lisa Confirms Daughter Amelia is Dating Scott Disick, and Crystal Won’t Back Down From Sutton 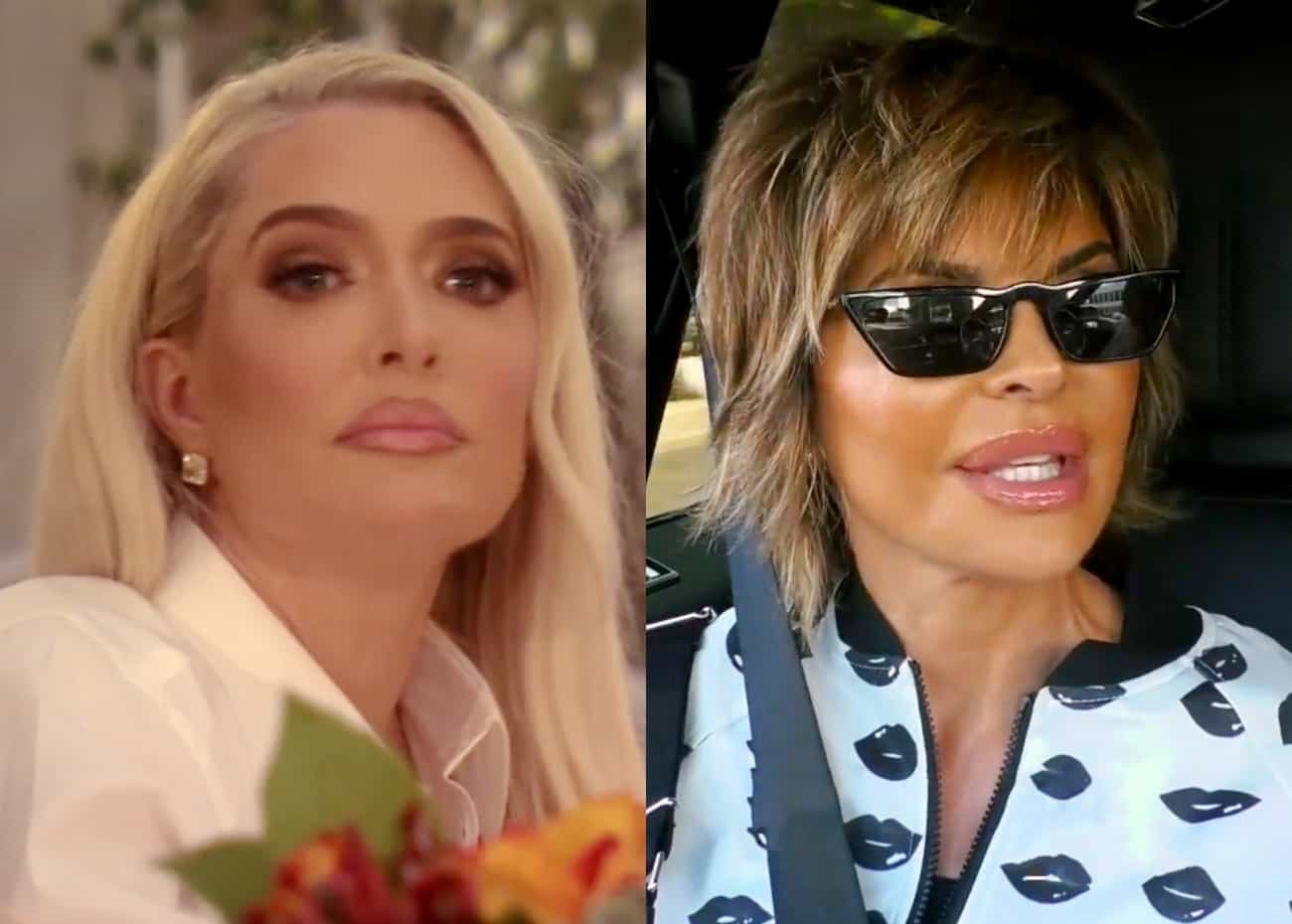 Grab your dictionaries because the use of the word “violate” sends these ladies into a tailspin on this episode of the Real Housewives of Beverly Hills.

Sutton is here to save the day and to hold Erika‘s hand along the way. Erika hops into Sutton’s “mid-life crisis divorce” gift (aka her Bentley), and the ladies head to a fully rented sanctuary, courtesy of Sutton. Sutton sure does like her privacy (funny how she is entangled in a situation with Crystal regarding LACK of privacy, but I digress…). Sutton is trying to show Erika that she has to treat herself throughout this divorce, and she vows that as Erika’s friend, she is there for her during the process. Erika shares that Tom is “mean,” gets “very possessive,” and can be “overly dismissive,” so she is bracing herself for one helluva divorce battle.

Crystal has a personal kickboxing trainer. She explains that a regular routine helps her stay grounded and that she enjoys having her kids partake in the training, too. However, when Crystal’s daughter throws an all-out fit regarding exercising, Crystal simply yells, “Take her in.” Imagine having so much money that you can just wave your hand and a nanny comes and swoops your tantrum-prone kid up?? Sigh.

Evidently, if you are getting a divorce, you have to partake in some cryotherapy. This Sutton sanctuary day kicks off with Erika, the self-proclaimed ice queen, in the chamber. During their sauna time, Erika shares that she was angry at Tom for not attending her Broadway show when she was starring in Chicago. Apparently, it was the final straw for Erika. While she was in New York, she realized that although Tom “funded” her career, she could make it on her own. Yet, Erika claims she yearned for Tom’s support. Cue: the victim storyline.

Garcelle‘s plate is far too full, hence the housekeeper. She is now a daytime talk show host on The Real, plus she is on the hunt for some love. When Garcelle asks her children if they want her to remarry, her sons are iffy on the topic. She laughs it off and makes it clear that one day she hopes to show her boys what a real marriage is.

Erika has realized that moving out of Tom’s mansion does have some downsides, like, ya know, lack of Christmas décor (eye roll). She has decided to enlist the help of Rinna to purchase some holiday cheer for her new home. Once en route (with Santa hats in tow, naturally), Erika fills Rinna in on some juicy information.

Erika spent some time at Garcelle’s house the night before, and Garcelle spilled that a rumor was floating around. LOL at Garcelle reading tabloids and then going straight to the source. Apparently, Tom was seen at a restaurant with a 60-year-old blonde! Erika claims she has heard that before and denies that she is in any relationship herself, despite what the headlines say about her dating life and cheating accusations.

To stay relevant, of course, and to keep on the topic of relationships, Rinna must bring up her daughter and her new boyfriend. Rinna tells Erika that Amelia, age 19, is dating Scott Disick, age 37 (with three kids). Rinna is exploding with glee to share that she only knows of Scott through the Kardashians #Famehungry. Rinna is THRILLED to have Amelia’s eating disorder out of the press and this new relationship in the headlines. Rinna shares that she’s not sure if she should “text” Kris regarding the relationship, but it is evident that she is bursting with this news, despite pretending to disapprove of the age gap. Puh-lease, Rinna, you are just as believable as Erika’s marriage sob story. While out shopping, Kyle phones the ladies to invite them out for drinks the following night.

Over at Kyle‘s house, we get to see how she is battling tween Portia, a young girl who is struggling with pandemic-itis — never went to her new school, not meeting new kids, not even knowing what to wear to her upcoming bat mitzvah. To perk up her mood, Kyle has arranged for her daughter Sophia to come home from college and surprise Portia. Portia’s reaction is extra and adorable and makes you realize just how special sister relationships are.

Side note: Yes, Dorit. It is incredibly narcissistic to have a large painting of yourself hanging up in your home. That’s all.

Crystal eating brownies before the drinks with the ladies is a whole mood. Kathy filing her nails during the car ride with Crystal on the way to drinks with the ladies is also a whole mood. Those two. Also, where are these ladies going? Kyle looks like she is going to a fall festival, Garcelle looks like she is going to a wedding, and Sutton just looks like a clown… or a present. Probably couture, but that massive bow shirt has got to goooo.

The women gather round to chat and Rinna blurts out (seemingly out of nowhere), “When I meet Scott Disick for the first time, do I need to call him Lord?” Rinna is LOVING this conversation and loving that she is the center of attention. She feigns being leery of Amelia’s love choice, but Garcelle shares that her son Oliver, who she thought was lost for a long time, has turned his life around with his new wife and all of her children from a pre-existing relationship. The point is, Garcelle wants Rinna to know that anything can happen so be open to all possibilities. Picturing Rinna being called grandma by Scott’s kids is absolutely hilar.

Sutton blows up Garcelle’s spot and tells all of the ladies that Garcelle is currently dating three different men. Erika jumps on this and states that any man she is going to date in the future needs to “send me their financials” first. Can’t say I am surprised…

While eating dinner, Kathy unintentionally reopens a closed issue. She jokingly calls Sutton “Peeping Tomasina,” referring to the Crystal/Sutton coat incident. Remember when we thought this whole conversation was over? Although Kathy did not mean to stir the pot, Kyle certainly knows what she is doing when she gives an overview of the entire issue.

Crystal gets hot and attempts to define “violate.” She shoots down any of the sexual innuendos that the women picked up from the telling of coat-gate, but she refuses to drop the word violate in describing how she felt when Sutton walked in on her naked. Crystal repeats she doesn’t want to talk about it anymore, yet she continues to talk about it! Sutton knocked. Crystal was on the phone. Sutton thought Crystal said, “Come in.” Period. On one hand, let Crystal feel how she feels. On the other hand… Let. It. Go.

Sutton threatens Crystal when she says, “You do not want me getting angry.” This fight is getting so ridiculous that even the other women start chuckling at Sutton’s bizzarro examples. You know it’s bad when Kathy steps in to be the voice of reason. She likens this coat scandal to that of a game of telephone, but Sutton makes it clear that telephone can be very dangerous to one’s character.

I lost it when Kathy refers to Dorit as, “My English girl,” and I am not entirely sure if it’s because Kathy can’t remember Dorit’s name or if Dorit’s accent has really thrown her off. Nevertheless, Kathy gets reminded that Dorit is from Connecticut. In the end, Crystal stands firms. VIOLATE stays. Sutton just has to deal with it and move on.