Home Real Housewives of Beverly Hills News Lisa Rinna Says Lisa Vanderpump “Doesn’t Have the Balls” to Return to RHOBH and Reacts to Garcelle Wanting Her Back, Plus Why She Didn’t Interrogate Erika Amid Scandal and Reunion Filming Date

Lisa Rinna Says Lisa Vanderpump “Doesn’t Have the Balls” to Return to RHOBH and Reacts to Garcelle Wanting Her Back, Plus Why She Didn’t Interrogate Erika Amid Scandal and Reunion Filming Date 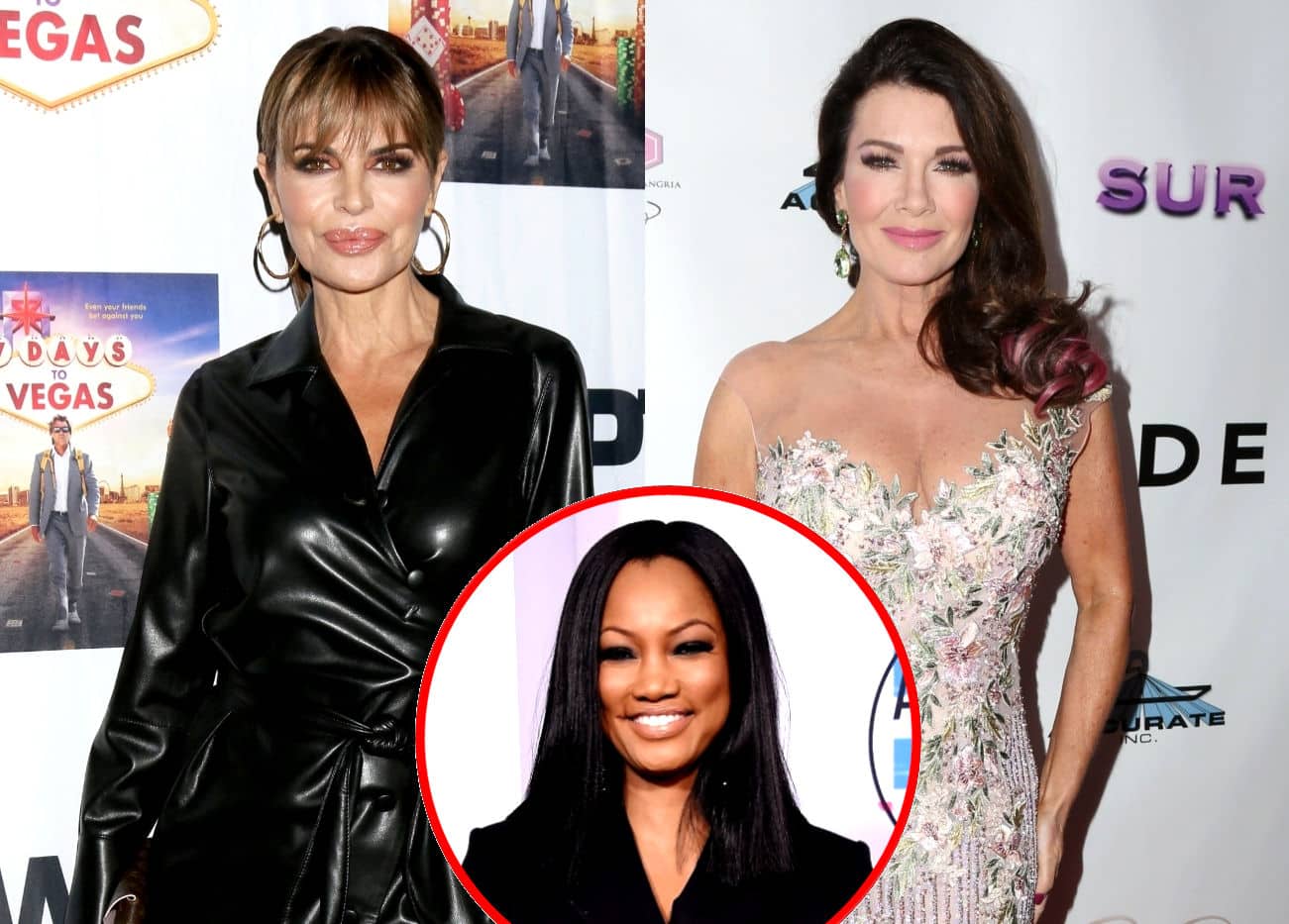 Lisa Rinna held a Q&A, of sorts, on her Instagram Story over the weekend. And during her chat with her fans and followers, she commented on a number of pressing issues pertaining to The Real Housewives of Beverly Hills.

As she answered a number of questions, Rinna reacted to the possibility of Lisa Vanderpump returning to the show before explaining why she didn’t interrogate Erika Jayne over her legal drama and reacting to Garcelle Beauvais saying LVP should come back.

After confirming she’d pick Kyle Richards and Teddi Mellencamp as the two Real Housewives she’d be stranded on an island with, Rinna shared her thoughts on an LVP return.

“She doesn’t have the balls to come back. She ran the last time,” Rinna alleged, according to a screenshot from Queens of Bravo on Instagram. 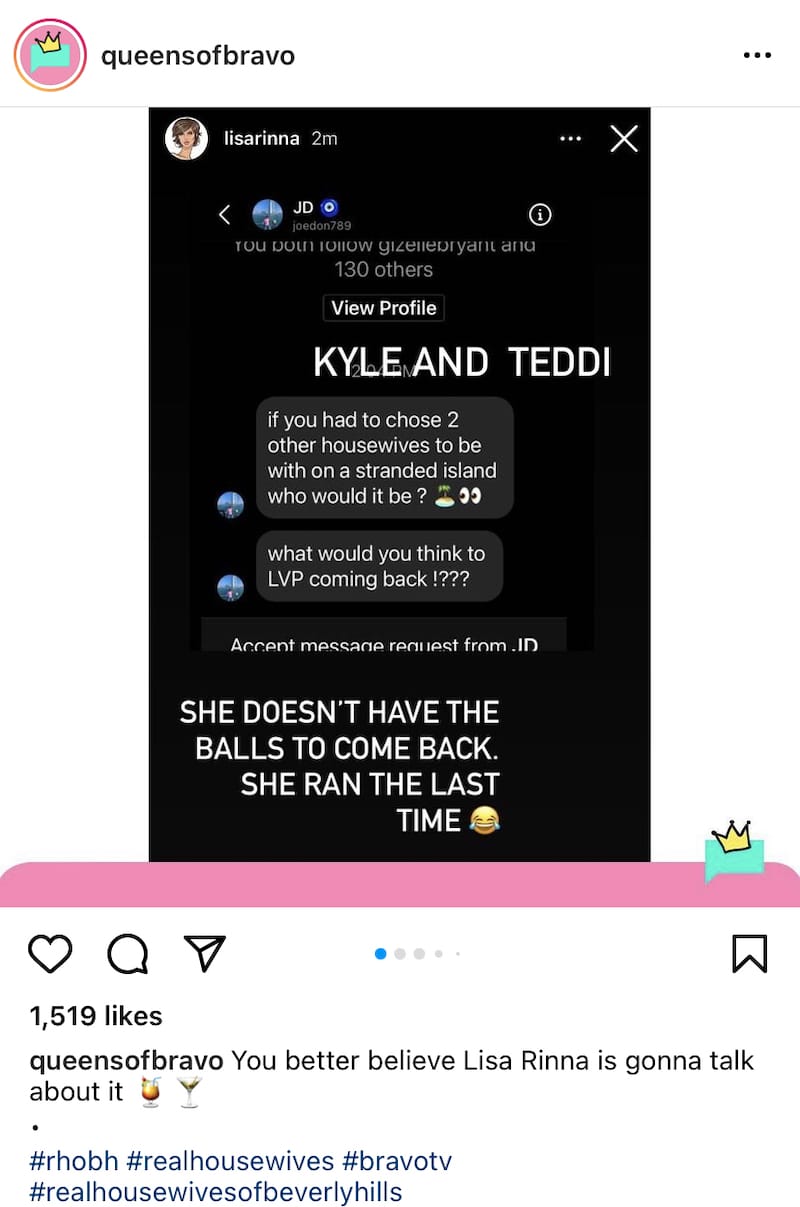 Another person wanted to know why Rinna “didn’t get all inspector gadget on [Erika]” after she and Thomas Girardi were accused of embezzling millions from his former clients.

“As I’ve said I’m waiting to see what happens – we don’t have the answers yet but we will,” Rinna explained. 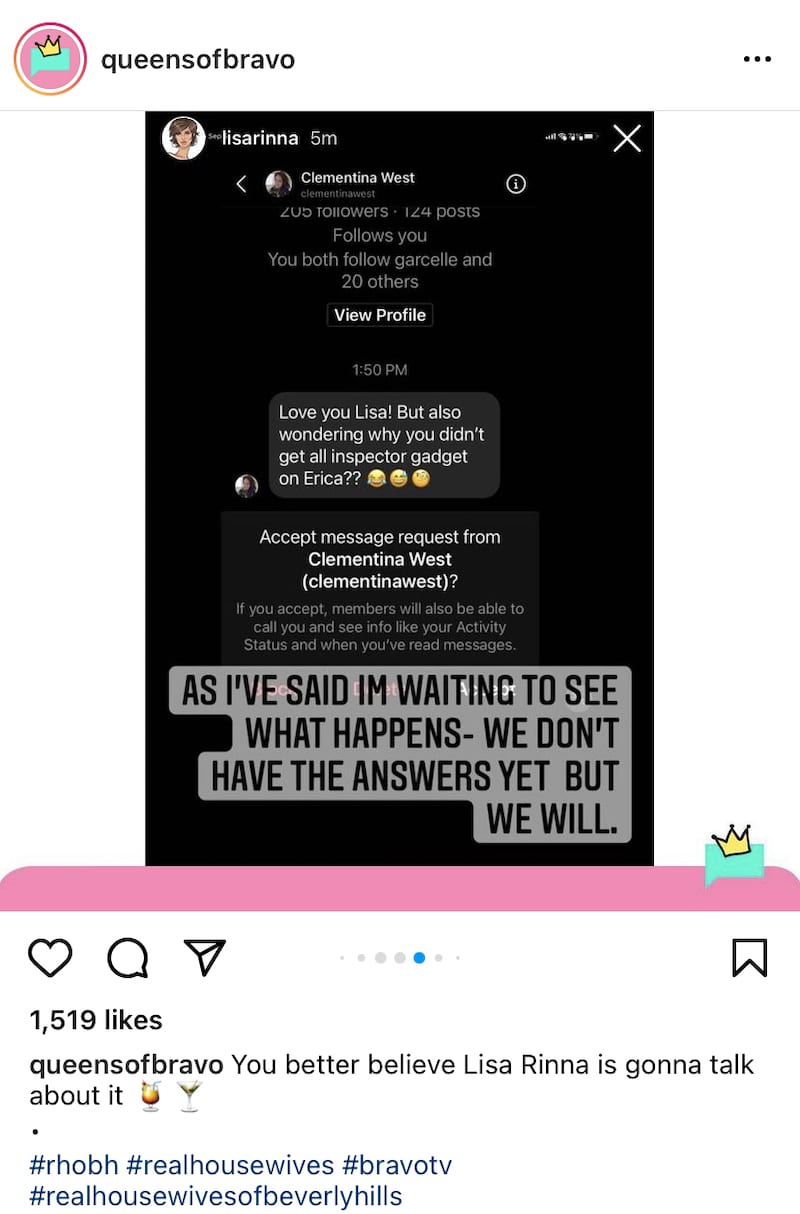 Rinna also told a third person, who reminded her of her past treatment of Vanderpump and Yolanda Hadid, that she’s “learned a great deal” over the past few seasons and hopes she’s “grown and become more empathetic.” 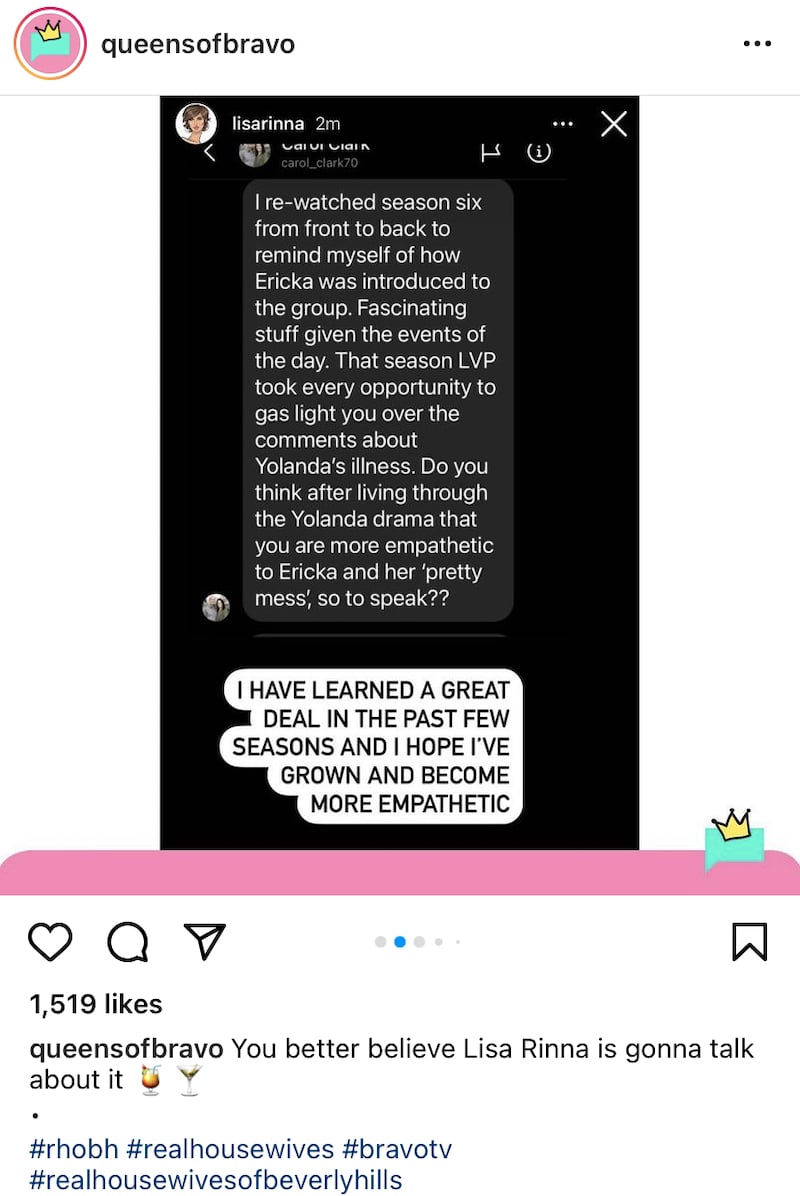 Despite Rinna’s many responses in regard to her potentially hypocritical behavior with Erika, her online audience members continue to send her inquiries about her season 11 demeanor.

“Why are you so critical of Garcelle [and Sutton Stracke] when they are asking questions this season when you’ve done the same/more intense last seasons?” another Instagram user wondered.

“I haven’t been critical of them at all I just encouraged Sutton to say to Erika what she said behind her back,” Rinna replied. 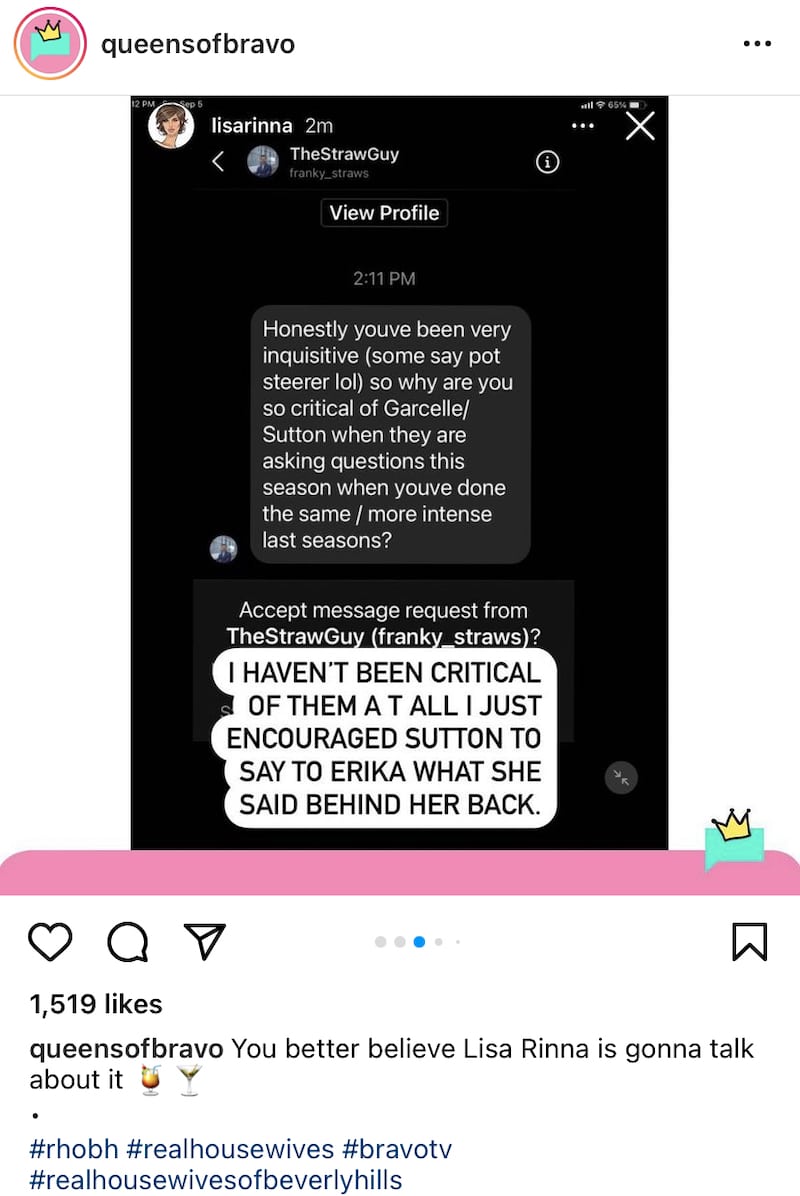 As the questions continued, someone else reacted to Dorit Kemsley labeling Garcelle inauthentic and suggested Garcelle’s recent statements about wanting Vanderpump to return to RHOBH confirmed Dorit’s suspicions.

“I understand why Dorit said Garcelle is not authentic. Garcelle’s inauthenticity really shows when she wants LVP back, yet she’s trying to build a relationship with the cast, who in fact, have no relationship with LVP by choice,” the fan stated.

In response, Rinna seemingly agreed, telling the woman she had an “interesting point.” 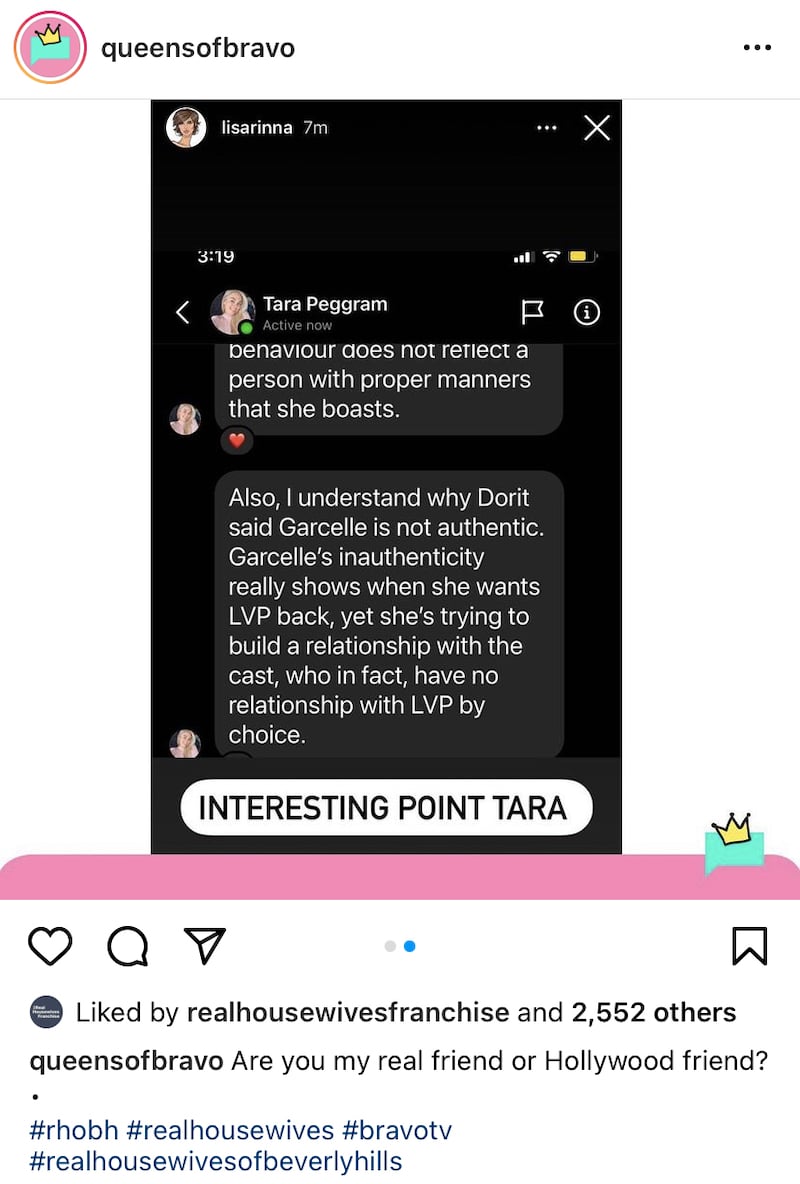 Also on Instagram over the weekend, Rinna confirmed the RHOBH reunion would be filmed on September 10.

“We film the reunion [September 10] do [you] have any questions for me?” she asked on her Story.