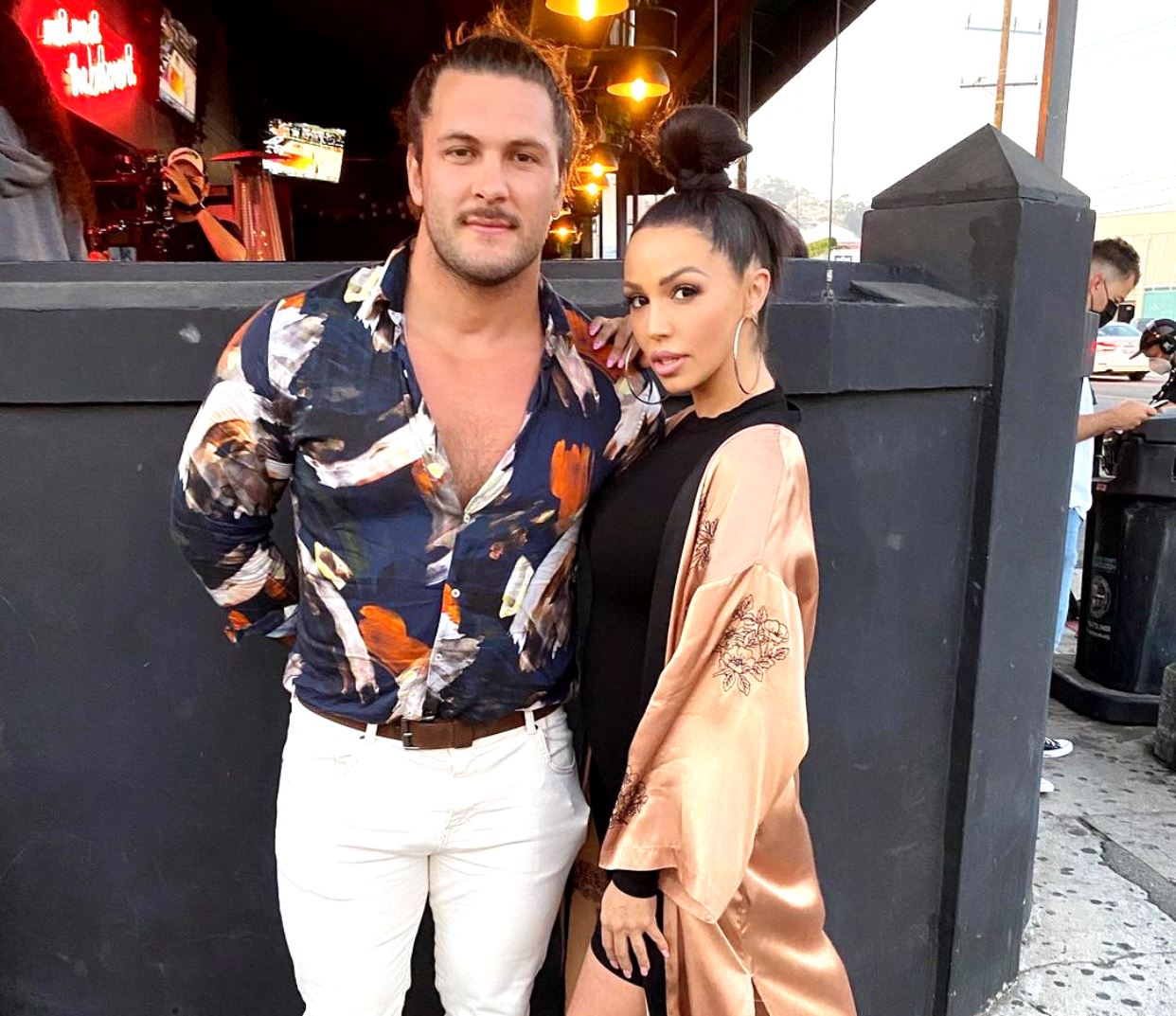 Scheana Shay is speaking out amid rumors of relationship drama with fiancé Brock Davies.

After both Lisa Vanderpump and Lala Kent confirmed Brock would be at the center of controversy on Vanderpump Rules season nine, Scheana responded to a fan on Twitter who mentioned potential “strain” between her and Brock as other members of the cast weighed in on his addition to the show on Instagram.

“I keep hearing [Pump Rules season nine] is going to show a strain in Scheana [and] Brocks relationship [and] I can see [a lot] of people will have an opinion on that which I will not like!” the fan tweeted at the end of August.

“No one said that,” Scheana replied. “They said Brock is at the center of a lot of drama, which he is. Lol. We are solid. Stay tuned!!” 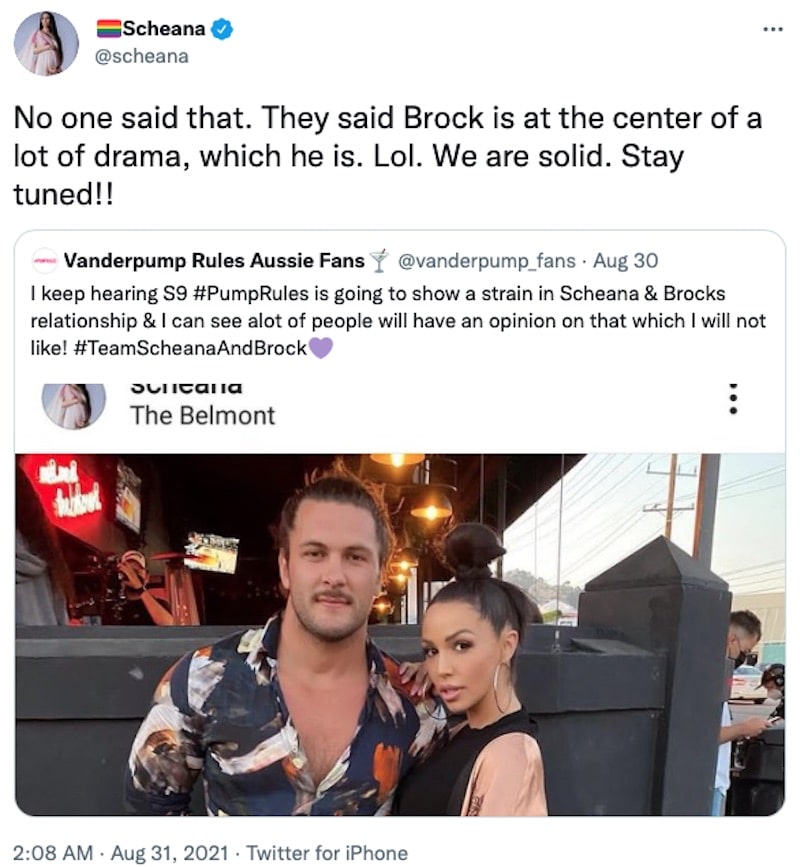 During an interview with Us Weekly last month, Lisa admitted things with Brock, who welcomed his third child (Scheana’s first) with Scheana in April, got “a little complicated” amid filming on season nine.

“A few people had a lot of opinions, and they weren’t afraid to verbalize them. … He is very much loved, but it wasn’t a smooth journey,” Lisa explained, adding, “That whole relationship is a little, eye-opening… Their relationship does play out on Vanderpump Rules this season.”

Meanwhile, a short time later, Lala told She Knows that viewers will be “surprised to see the drama and what a huge storyline Scheana’s fiancé Brock is.”

“It used to be about sleeping with each other’s boyfriends or like, you said this and you did that, and it’s much deeper than that,” she continued.

Around the time that Scheana shut down rumors of relationship drama with Brock, he took to his Instagram page, where he shared his official cast photo for Pump Rules season nine.

“I’ll drink a Scotch to season 9 VPR Cheers!” he wrote in the caption. 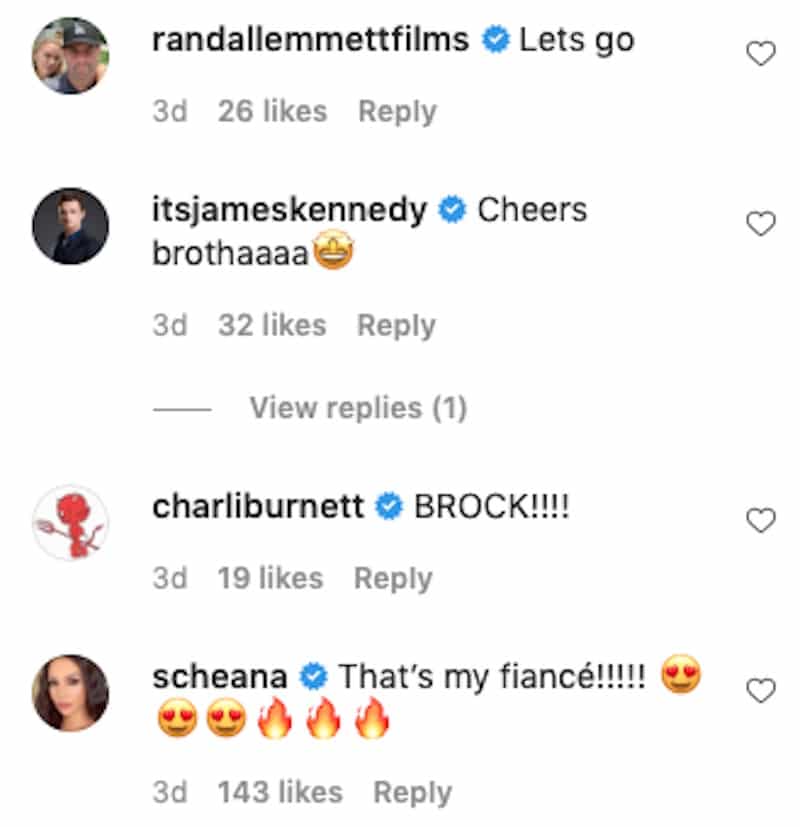 After the trailer for season nine saw a number of cast members discussing Brock’s lack of involvement with his two older children, who live in Australia with his former girlfriend, a source told Page Six the new reality star hadn’t seen the kids, Eli and Winter, due to the pandemic.

“It’s a complicated family matter,” the insider told the outlet. “The pandemic hindered travel between the US and Australia, where the kids live… Fans will get a better picture of the full story — which is more than the teaser clip — when the show premieres.”