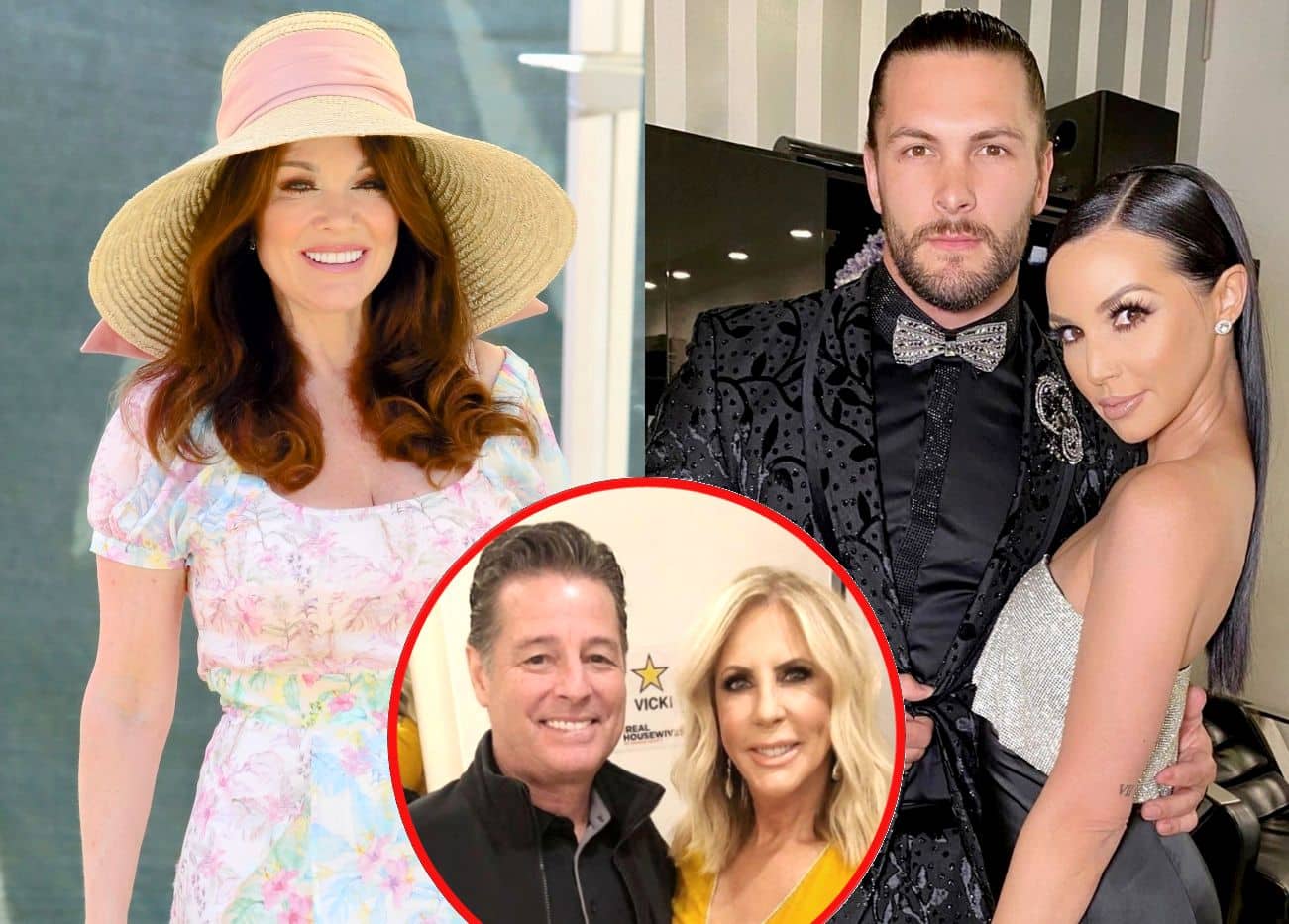 Lisa Vanderpump is opening up about the drama that is to come on the new season of Vanderpump Rules.

In a couple of new interviews, the Real Housewives of Beverly Hills alum revealed that her cast mates, Scheana Shay and Brock Davies, will be seen facing hardships during season nine and reacted to her recent vaccination drama with Steve Lodge, the fiancé of former Real Housewives of Orange County star Vicki Gunvalson.

“Is Brock The One? Only Scheana will find out that, but it definitely got a little complicated there,” Lisa revealed to Us Weekly on August 19. “And a few people had a lot of opinions, and they weren’t afraid to verbalize them. … He is very much loved, but it wasn’t a smooth journey.”

According to Lisa, who “hopes” Brock is The One for Scheana, he will likely be the most surprising aspect of Pump Rules season nine.

“I think Brock brings definitely, you know, some surprises. And that whole relationship is a little, eye-opening,” she teased of his drama with Scheana. “Their relationship does play out on Vanderpump Rules this season. Vanderpump Rules definitely felt [like] it was a different energy, but it did [still] feel as complicated and as intense, but because they were grown up, it seems like there were slightly more in-depth issues rather than, you know, somebody saying ’It’s my birthday.'”

As Pump Rules fans may know, Scheana and Brock welcomed daughter Summer Moon, their first child together and the third for Brock, in April, and in July, they confirmed their engagement.

Regarding the 2020 firings of Stassi Schroeder, Kristen Doute, Max Boyens, and Brett Caprioni, as well as the exits of Jax Taylor and Brittany Cartwright, Lisa said she would have loved for the men and women to have gotten a second chance.

“There were things that were said and actions that were taken,” Lisa said of the shakeup. “Personally, I would prefer people to learn from their mistakes. And I think we’ve seen a lot of growth on Vanderpump Rules of people stepping in the right direction and me trying to put them back on the straight and narrow, but that was Bravo’s decision.”

During a separate interview, Lisa weighed in on Steve’s claims of her infringing on people’s rights by requiring guests to either show proof of vaccination or a negative COVID-19 test to enter her Los Angeles restaurants.

“They have a right not to go, so they should use that right,” Lisa told TooFab. “I have a right to protect my staff and my customers.”

“I’m not saying it’s mandatory vaccination. I would like to, but we can’t, people have their own choice. But I am saying we want to see a negative test because I’m protective of the situation,” she continued. “I was one of the last ones to open out of everybody, especially Tom Tom because it was more of a bar feel and I’m protective about it.”

On Instagram, Steve had asked, “Whatever happened to the right of privacy of your health records?,” and added, “I guess the great unwashed and unvaccinated will have to spend their restaurant dollars elsewhere.”

In response, Lisa said, “When Vicki Gunvalson’s boyfriend is comparing [COVID-19 to] Ebola … Ebola is a terribly contagious disease. I spoke with the United Nations about it. If 600,000 people in America had died from Ebola, trust me, I would want an Ebola vaccine as well before you came into my restaurant. But that wasn’t the way, so making those kind of comparisons is bullsh-t.”

“Take his rights and go somewhere else, I’m happy with that,” she added. “I’m not going to miss him.”