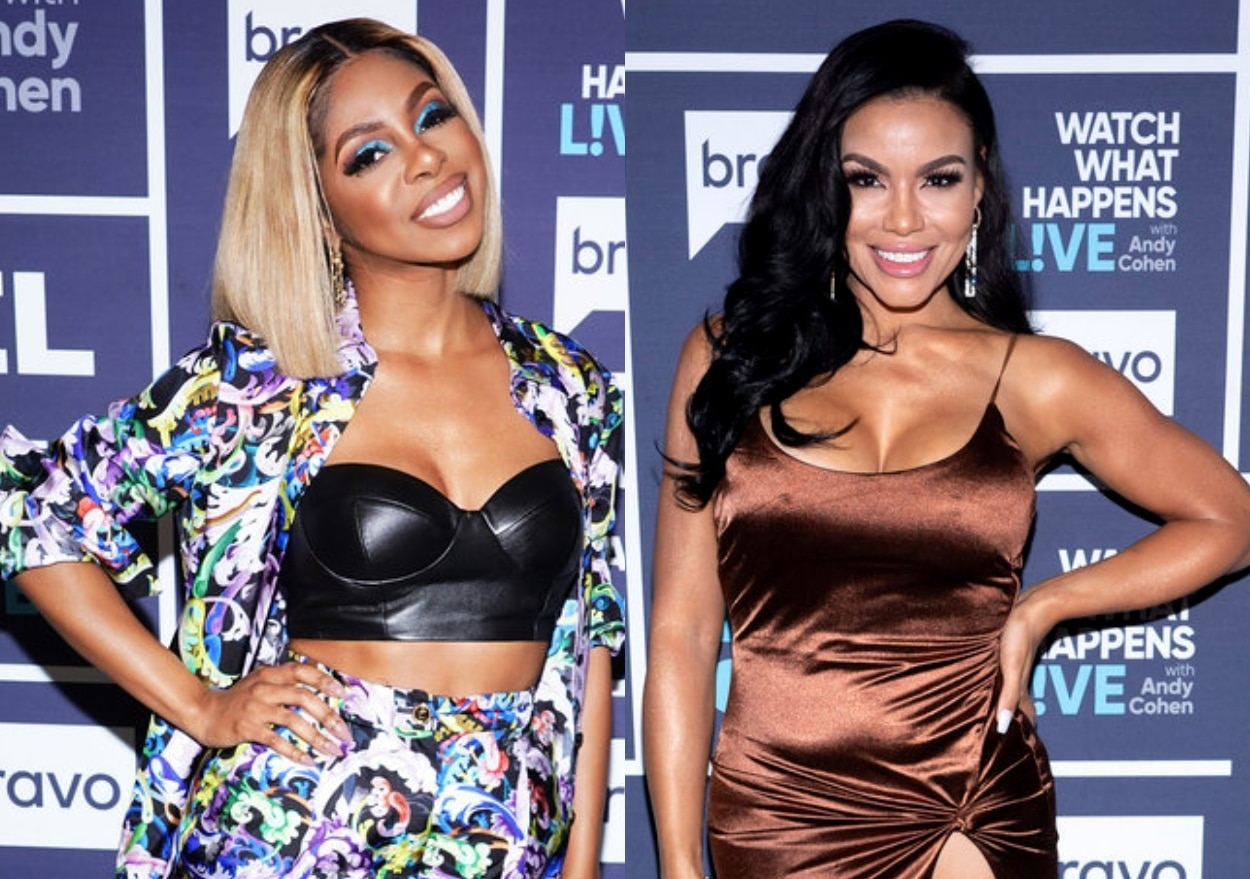 Candiace Dillard-Bassett claims she was completely out of the loop about Mia Thornton‘s mother’s past struggles with addiction when she called her “low-budget” during Sunday’s episode of The Real Housewives of Potomac.

Amid the airing of the episode, Candiace took to Twitter, where she defended her comments toward Mia’s mother. Candiace told her fans and followers she was unaware of her past as she was slammed as “disgusting” and “inappropriate” and accused of hitting “below the belt.”

“I knew nothing of Big Foot’s mama trauma. I wasn’t present for those moments nor did anyone share them with me,” Candiace explained in a September 16 post.

Although Candiace insisted she was not present during the moments Mia opened up about the heartbreaking challenges she’s faced with her mom, one fan pointed out that she seemed to continue to speak poorly about her, even after learning of their troubled history.

“Yeah, but looking at next week’s episode she talks about her Mom again, after she was told about Mia’s Mom, that makes her even more disgusting!!” the person shared.

“I wasn’t there either. Didn’t know,” Candiace replied. 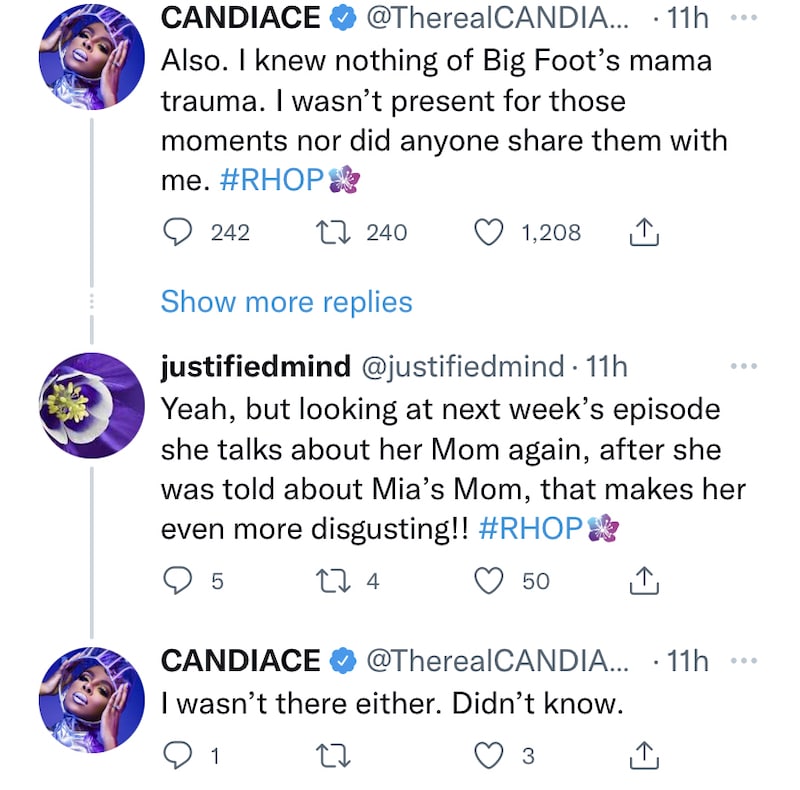 During Sunday’s show, Candiace confronted Mia about the conversation they had during last week’s show, which included chatter about Chris Bassett acting as Candiace’s manager.

Although Candiace didn’t hear the comments herself, she was informed of the gossip by her castmates.

In another tweet, Candiace mentioned double standards as she pointed out that some appeared to be more critical of Dr. Wendy Osefo for relaying the information to her than they were toward those who actually participated in the conversation with her mom.

“So it’s inappropriate for Wen to tell me about the shade…but its appropriate for the ain’ts to be shady and talk to my mama during production? Chyle. I do not comprehend,” Candiace wrote.

“It’s inappropriate for [you] to talk about Mia’s mother KNOWING about her struggles with addiction. [Gizelle Bryant] told [you] about Mia’s mom (I bet u deny it) [and] every chance [you] got, [you] said “yo mama” just to hit below the belt,” a critic replied. “That’s why [Monique Samuels] whipped your sorry a–. You are a B-TCH!!”

Following the post, Candiace told the person they were very wrong in their opinion of her.

“It has to hurt to be loud AND wrong. You’re definitely the (loud, wrong) bitch but thank you for trying,” she clapped back. 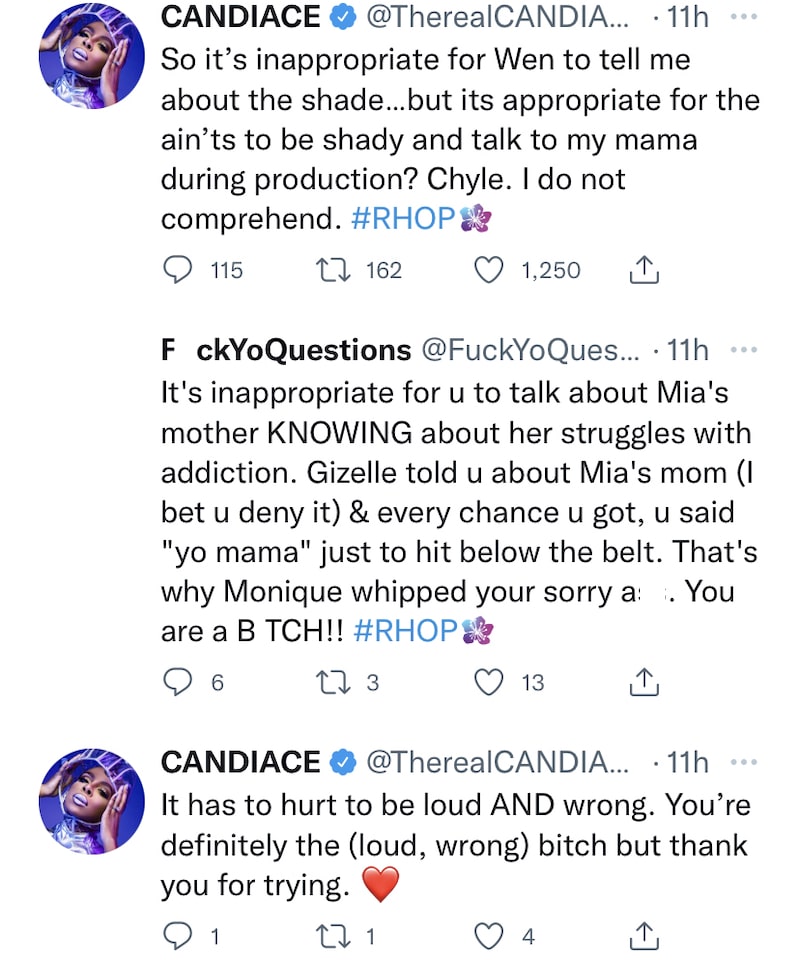