Lisa Rinna responded to cheating and abuse rumors aimed at her husband, actor Harry Hamlin, on her Instagram Story on Wednesday night.

Amid the first part of the Real Housewives of Beverly Hills season 11 reunion, Lisa reacted to a fan page, who shared a clip of her saying Harry had made a batch of his famous sauce before he went to Canada and wondered why the cheating rumors were never mentioned on the show.

“How come the Harry Hamlin cheating rumors at his place in Muskoka, Canada never gets brought up?” the Bravoaholics asked on Instagram.

“He’s too busy living with his gay lover in the Valley while he’s cheating in Canada with Trish,” Lisa replied.

As RHOBH fans may recall, a rumor linking Harry to a woman named Patricia surfaced on Twitter in September of last year. At the time, a woman said her girlfriend “f-cked Harry Hamlin in Muskoka for an entire summer in 2018” and mentioned “his affair with Patricia.”

But, never one to miss her chance at a clap back, Lisa quickly spoke out.

“Yeah and I watched it was hot as hell,” she replied. “Patricia well she’s kind of [a] downer. I [didn’t] like her so much.”

Amid the buzz, Southern Charm star Patricia Altschul was prompted to get in on the action after a fan suggested that she could be the Patricia in question.

In another post on her Instagram Story, Lisa responded to another rumor, which accused her husband of being a woman beater and a woman hater.

“Recently read he allegedly beats his women, and also suspected he is gay/woman hater,” a person had written. 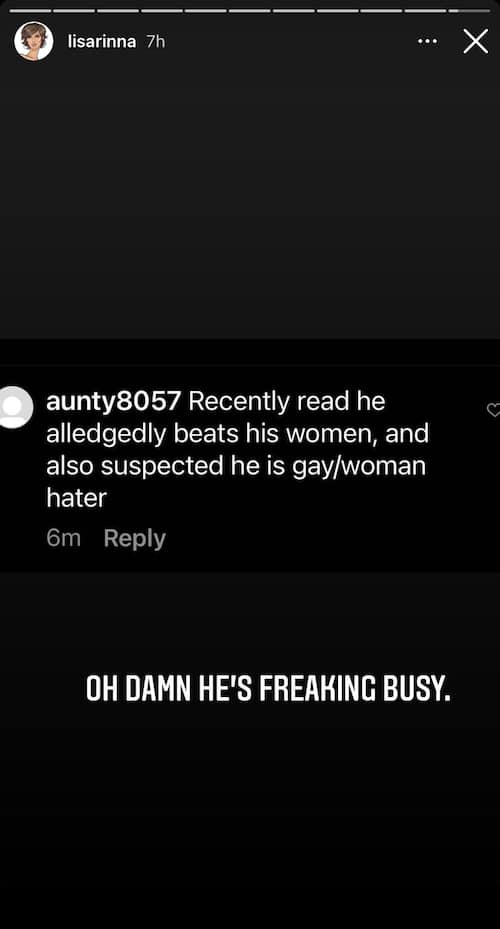 “People say Harry doesn’t live here and he only shows up for tapings. So I’m going to say right now here, ‘He lives here. He actually lives here,’” Lisa confirmed during an unseen moment from the RHOBH season 10 reunion shared by the Bravo Insider. “Twitter doesn’t think he lives here. He’s here. He lives here. So, it’s good.”