Home Real Housewives of Beverly Hills News RHOBH’s Kyle Richards Says Andy Cohen is a “Sh-t-Stirrer,” Offers Update on Rinna, and Explains Why She Won’t Do Spinoff With Sisters, Plus Talks Farrah’s Wedding and RHOSLC

RHOBH’s Kyle Richards Says Andy Cohen is a “Sh-t-Stirrer,” Offers Update on Rinna, and Explains Why She Won’t Do Spinoff With Sisters, Plus Talks Farrah’s Wedding and RHOSLC 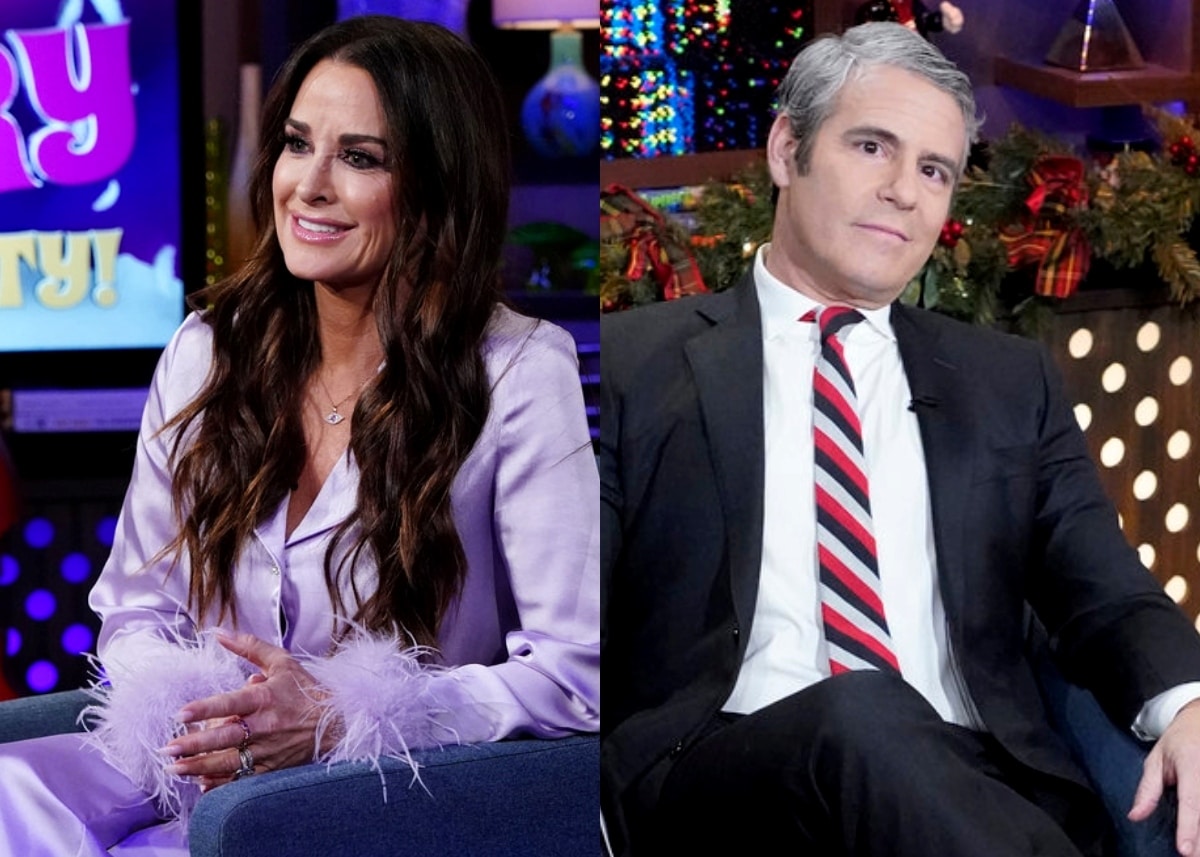 Kyle Richards jokingly threw some shade at Andy Cohen while appearing on Teddi Mellencamp and Tamra Judge‘s podcast at the end of last week.

Before explaining why she is no longer open to appearing in a spinoff with her sisters, Kathy Hilton and Kim Richards, and revealing how Lisa Rinna is doing following the death of her mother, Lois Rinna, the Real Housewives of Beverly Hills star admitted Andy is both a “shit-stirrer” and a “psychologist” for the Real Housewives.

“He’s a shit-stirrer and to me, he’s like our group psychologist” Kyle said on the latest episode of the Two T’s In A Pod podcast.

Although starring in a spinoff with her sisters has been mentioned in the past, most recently by Kathy herself, Kyle, who has allegedly landed her own show on Peacock, told Teddi and Tamra it isn’t happening.

As fans well know, Kyle hasn’t always had the best time with her sisters on the show, especially Kim.

“My least favorite season was season five with my sister Kim and Amsterdam. That was the split-screen reunion where there’s memes of me screaming. I had veins bulging out of my neck and was sobbing,” she recalled. “It’s completely different when it’s your family and it had so much spill-over effect into the rest of my family. It was just so hard and any time I wanted to defend myself, I would have looked bad in my family’s eyes because I would have to reveal things so I had to always take it on my chin with my hands tied behind my back. Because anything I said to defend myself or explain something would be revealing things I shouldn’t say. It was so beyond frustrating.”

When Kyle was then asked which RHOBH star she texted last, she answered, “Teddi,” before revealing Lisa was before that and sharing an update on her co-star.

”She’s doing okay. It’s hard obviously to jump back into work but yet you want to jump back into work because it’s a good distraction and after losing your mom,” Kyle explained. “Obviously it’s so difficult but she lived 93 and a half years and her mom wouldn’t want her sitting home. She would want her to be up and getting back to work. It’s a mix of emotions.”

Speaking of family, Kyle recently confirmed that daughter Farrah Aldjufrie is engaged to Alex Manos and noted that when it comes to her upcoming wedding, she and her husband Mauricio Umansky are going to have to outdo what they did for daughter Portia’s bat mitzvah.

“She is our last child so we did go over-the-top for [Portia]’s bat mitzvah. Now, looking forward to the wedding, it’s gotta be equal or better. We’re going to make it beautiful,” she teased. “I have to ask her but everything’s been so chaotic since she got engaged. I don’t want to be so pushy but she did say a short engagement so I do know that.”

Also during the interview, Kyle named Real Housewives of Salt Lake City when asked which other franchises she enjoys.

“I watch all of them. Right now I’m really enjoying [RHOSLC]. And then of course I always watch [The Real Housewives of Orange County] because they’re the same producers and crew so I hear little tidbits here and there,” she revealed.

As for what the future holds for Kyle, she’s getting back to acting amid production on RHOBH season 12.

“I’m doing the next Halloween again. Halloween Ends,” she confirmed. “I’m really excited to start shooting that at the beginning of next year.”

The Real Housewives of Beverly Hills season 12 will begin airing on Bravo sometime in 2022.