Home Real Housewives of Beverly Hills News Lisa Rinna Compares Herself to “Cockroach” You Can’t Get Rid of, Hints at RHOBH Season 12 Storyline, and Recreates Controversial Video of Daughter’s Dancing

Lisa Rinna Compares Herself to “Cockroach” You Can’t Get Rid of, Hints at RHOBH Season 12 Storyline, and Recreates Controversial Video of Daughter’s Dancing

Lisa Rinna is never one to back down amid controversy and today is no different.

Although the longtime Real Housewives of Beverly Hills cast member faced backlash after sharing a video of her two daughters, Delilah Hamlin and Amelia Hamlin, dancing on Christmas against their wishes, she has continued to stay active on social media and recently compared herself to a “cockroach.”

“I’m like a cockroach. You can’t get rid of me,” read a message shared to Lisa’s Instagram Story.

Then, with a second post, a reshare from a fan, Lisa further drove it home that she isn’t going anywhere.

She also hinted at her RHOBH season 12 storyline by reposting the message, which suggested viewers may be seeing a different side of her when the show returns.

After one person asked if Lisa would “ever go away,” a self-proclaimed “Rinna Stan account” said they hoped she would not.

“I’m actually a fan of hers and I think she makes great television,” the fan wrote. “I enjoy her a lot and I am very curious if we will see a different side of her next season. Filming started just after (or during, not sure) Lisa lost her mother. We all loved Lois. Seeing her grief process will be very interesting and helpful to many. Remember, there is no ‘right or wrong’ in how to [grieve]. And I think Lisa will teach us exactly that next season.” 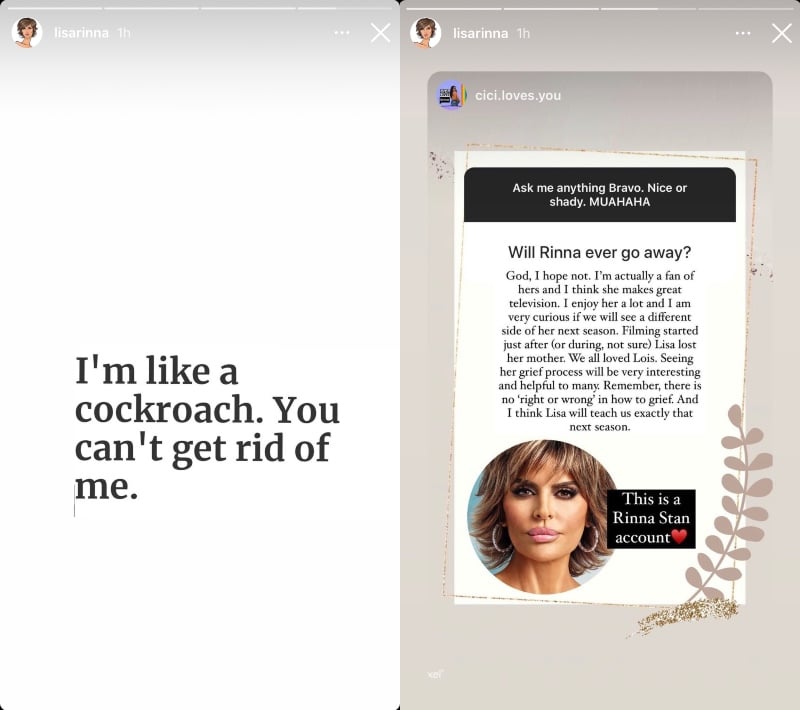 Over the weekend, Lisa shared a video of her daughters, who she shares with husband Harry Hamlin, dancing with the two of them and Delilah’s boyfriend, Eyal Booker, on TikTok and Instagram. She was quickly called out by Amelia, who made it clear that she and Delilah didn’t want the clip to be made public.

A short time later, after pointing out that the clip got over 1 million views and deleting it from her Instagram page, Lisa recreated the video by herself.

“This kids doing it so much cuter but whatever,” she captioned the clip.

Also amid the controversy, Lisa shared a video taken during a promotional shoot for her beauty line in which she was seen with daughter Amelia.

“Rinna Beauty shot by [Greg Swales] for the Amelia Kit,” Lisa wrote in the caption of her clip, also sharing the official website for her collection.

Also in her post, Lisa said the Delilah Kit was “coming soon” to Rinna Beauty.

The Real Housewives of Beverly Hills season 12 will begin airing on Bravo sometime in 2022.