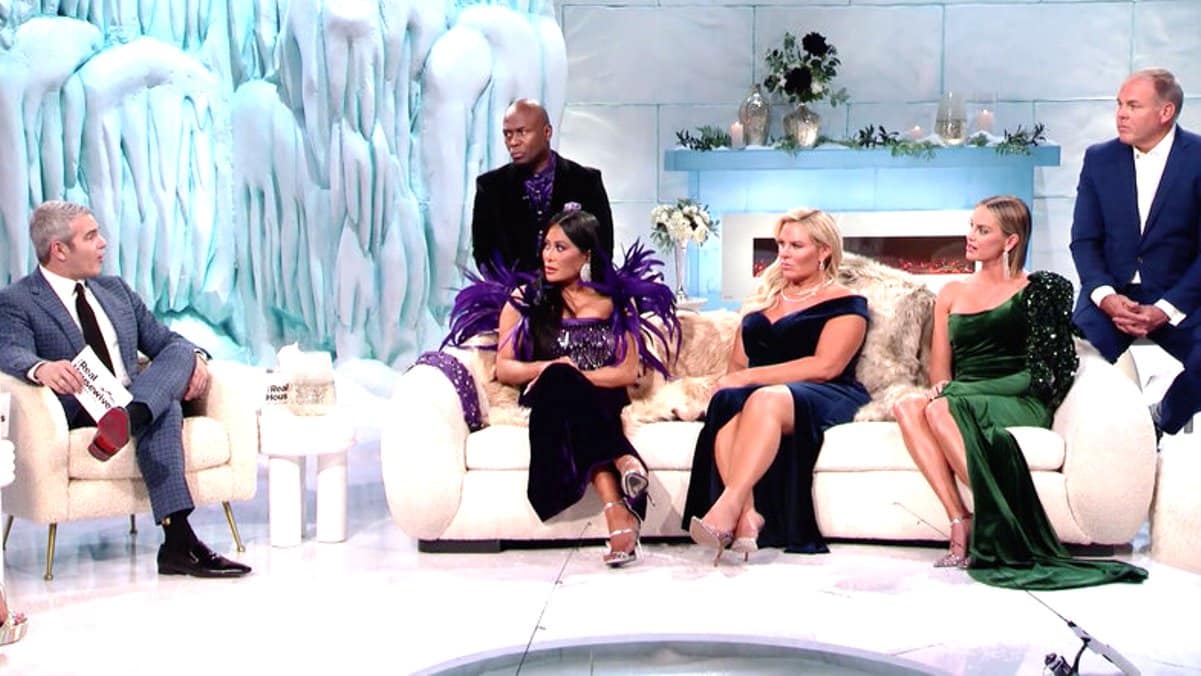 The trailer for the three-part Real Housewives of Salt Lake City season two reunion has just been released, and in it, host Andy Cohen is seen asking a number of questions of both Jen Shah and her husband, Sharrieff Shah, in regard to the prison time she’s facing as a result of her alleged involvement in a telemarketing scheme.

As Jen shaded her season two castmates, who included Heather Gay, Whitney Rose, Meredith Marks, Lisa Barlow, Jennie Nguyen, and Mary Cosby, who did not attend the January taping, and Lisa took aim at producers, Andy focused on the money laundering and fraud charges Jen is set to face at trial next month.

“You’re being charged with fraud and money laundering,” Andy tells Jen as she sits in a purple feathered dress.

“Did you ever question where the money came from?” Andy continues, directing his question to Jen’s husband, Sharrieff.

But he doesn’t respond. And when it comes to Jen’s willingness to answer questions, she seems to be playing coy.

“You don’t know what the charge is?” Andy wonders.

After fans watched as Lisa distanced herself from Jen following the news of her arrest on season two, Jen called out the women for their lack of support amid her legal drama, suggesting they treated her “like sh-t” amid her challenges.

“What it feels like on my end is, like, ‘Hey, Jen, we can treat you like sh-t, ’cause you need all the friends you can get right now,'” she complains.

“Well, you sh-t on me and I still showed up for you!” Heather claps back.

Although Mary wasn’t present at the taping, the cast did discuss the drama surrounding her church, and Andy noted that she was upset with Whitney for calling her “a predator.”

Then, after Andy told Meredith she was threatening the cast and Meredith accused Jennie of attacking her for “the entire season,” the spotlight was put on the falling out of Meredith’s friendship with Lisa.

“It kind of seemed like some sort of a truth dump for you,” Andy tells Lisa of the hot mic moment in which she suggested Meredith is a cheater. “Do you think she’s a wh-re?”

But Meredith isn’t convinced, and she says, “The venom and the hatred that the delivery came with is what resonated. I was sick.”

In response to her behavior being questioned, Lisa breaks down and cries that “everybody here wants to break me all the time” and has a meltdown with production backstage.

“You guys knew what you were doing when you put that in there,” she tells someone about her accusations against Meredith. “Like, I was on a rant. I just think what you guys did just gave them all a reason to f-cking say, ‘That’s who you are! That’s who you are!’

“I’m done,” she adds as she’s seen walking out of her trailer.

The Real Housewives of Salt Lake City season 2 reunion kicks off on Sunday, February 27, at 9/8c on Bravo.