Jax Taylor Confirms He and Brittany Are “Moving” to Florida, Says He Might Sell “Crap” From Vanderpump Rules and Sparks Rumors of New Project

Three years after he and wife Brittany Cartwright dropped $1.9 million on a modern farmhouse in the Valley Village area of Los Angeles, the former Vanderpump Rules cast member has confirmed that he and Brittany are preparing to move their family, including one-year-old son Cruz Michael Cauchi, to Florida.

“We’re going to be moving there shortly. We’re just trying to figure out some logistics but we will be moving to Clearwater. We can’t wait,” Jax informed a fan on Cameo, via Reddit.

Jax also told the fan on Cameo that he has a lot of memorabilia from his time on Pump Rules, and that all of those belongings are currently in storage as he prepares to potentially sell them.

“All my crap from Vanderpump is in storage. I haven’t even gone through it. I’m sure one of these days I’m going to go through it and get rid of it,” he said, noting that he may donate the money he makes to charity.

In other Pump Rules news, Jax recently sparked rumors of a potential new project as he posed for a photo with his PR person as they seemingly enjoyed a celebratory meal at celebrity hotspot Craig’s restaurant.

“[Three] more weeks,” the woman, named Lori, wrote in the caption of the photo, which has since been shared on Reddit. 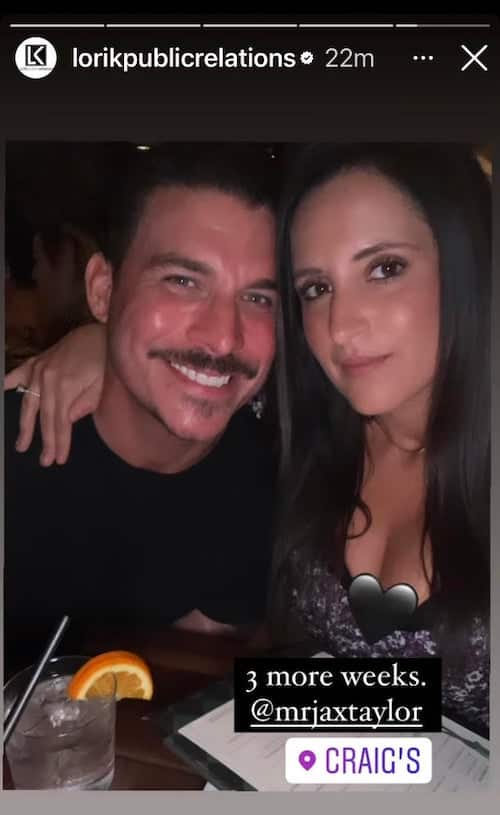 As fans may recall, Jax said he would be returning to television “soon” back in October 2021 as he hosted an “Ask Me Anything” session on his Instagram Story.

That same month, a rumor began swirling about a possible project with Peacock.

“They’re currently working on a reboot of Jax and Brittany Take Kentucky — the show will follow the two as they leave Los Angeles behind and buy an old farmhouse in Brittany’s hometown to restore,” read a tip sent to Deux Moi on Instagram.

“This is part of a larger move to get more real estate shows on Peacock… Jax has been told to keep it quiet but he’s already dropping hints on IG live,” the source continued.

But a short time after the claim was made, Radar Online confirmed the report was “not true.”

Vanderpump Rules was recently renewed by Bravo but a premiere date for the 10th season has not yet been revealed.